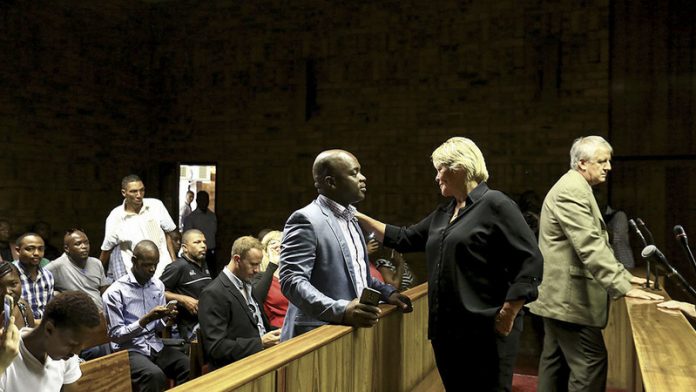 When Glynnis Breytenbach walked into Regional Court 3 of the Pretoria magis­trate’s court on Monday, she grinned at the photographers and cameramen craning to capture her image.

“How would you describe how Breytenbach looks?” I heard a reporter ask behind me.

“Chilled,” her colleague answered, “I would say she looks chilled.”

Chilled. An adjective completely out of place in the sea of courtroom clichés, but one that is completely appropriate here. Breytenbach is not anxious, or nervous, or fearful, or even angry.

She has the effortless calm of someone who has seen this movie before and knows exactly how it ends.

“I want this trial to go ahead,” she says. “I have no doubt I will be vindicated.”

Just two days after Breytenbach was released on bail on charges of defeating the ends of justice and violating the National Prosecuting Authority (NPA) Act, the state confirmed that it had reinstated racketeering charges against the former head of the Hawks in KwaZulu-Natal, Johan Booysen, and 27 members of the Cato Manor Organised Crime Unit.

It’s unclear why the NPA now believes it can ensure that both are convicted. But, if these attempts to prosecute Breytenbach and Booysen are being made in good faith, then their timing is unfortunate.

The charges come at a time when the Democratic Alliance is awaiting a court ruling on whether an inquiry should be ordered into the fitness to hold office of the deputy director of public prosecutions, Nomgcobo Jiba. She has been implicated in wrongdoing by Breytenbach and Booysen.

The DA’s James Selfe says it is “obvious” that the charges against Breytenbach and Booysen are part of a somewhat blunt attempt to protect Jiba. “Given the timing, and given the individuals involved, there is no other explanation,” he says.

If he’s right, then it would seem that the political capture of the NPA is no longer something darkly hinted at but a real and terrifying reality.

So what do we know about the cases against Breytenbach and Booysen, and how are they linked to Jiba?

Johan Booysen
In 2012, Booysen was charged with racketeering, murder and defeating the ends of justice relating to the so-called Cato Manor hit squad by Jiba, then the acting national director of public prosecutions. Durban high court Judge Trevor Gorven threw the case out of court and agreed with Booysen that Jiba had lied about having evidence to justify charging him with racketeering.

Jiba was charged in court with fraud and one count of perjury relating to her failed attempts to prosecute Booysen, but the NPA elected to drop those charges after Shaun Abrahams was appointed national director of public prosecutions last year.  Abrahams is regarded as being closely aligned to Jiba.

Although the criminal case against Jiba may have been withdrawn, the high court’s findings of dishonesty against her still stand and form a substantial part of the DA’s challenge to her fitness to hold office.

The NPA has not detailed why it now believes it can prove that Booysen is guilty of racketeering after the high court determined there was no legal basis to do so.

Glynnis Breytenbach
Before being appointed as the DA’s spokesperson on justice, Breyten­bach spent decades working as a prosecutor in the Specialised Commercial Crimes Court. It was in that role, she says, that she fell foul of Jiba’s efforts to stop the prosecution of the crime intelligence boss at the time, Richard Mdluli, for murder and corruption.

She maintains she faced disciplinary action from the NPA precisely because she believed he should be prosecuted.

A side note here: Mdluli and Jiba had worked together on a failed bid to put Gerrie Nel, the prosecutor of national police commissioner Jackie Selebi, on trial for corruption. That bid failed, and Jiba was suspended and charged departmentally for her role in attempting to procure an arrest warrant for Nel.

In 2010, the case was dropped and Zuma appointed Jiba as a deputy director of public prosecutions in December that year.

She was later appointed as the acting national director of public prosecutions, where she controversially oversaw the withdrawal of both cases against Mdluli, a self-confessed Zuma loyalist. Although Jiba denied that she was directly involved in the decisions, Judge John Murphy ruled that she had “tacitly confirmed” them.

The Pretoria high court judge found that the decision to withdraw the charges was unlawful and irrational – and the Supreme Court of Appeal agreed with him.

In his judgment, Murphy criticised Jiba for adopting an approach to the Mdluli withdrawal decisions that was “technical, formalistic and aimed solely at shielding the illegal and irrational decisions from judicial scrutiny”.

He added: “The discretions conferred on the prosecuting authority are not unfettered. It seems to me, therefore, inherently wrong to allow laxity to prosecutors, by permitting them to act unreasonably or unfairly, when there is no compelling policy or moral reason for doing so, especially in an era where throughout the world corruption and malfeasance are on the rise.”

Its response to the controversy over the Breytenbach and Booysen prosecutions has been simple, but not particularly comforting. Trust us, the state keeps insisting, just trust us.

“We would ask people to allow the criminal processes to unfold,” the NPA spokesperson, Luvuyo Mfaku, said on the day of Breytenbach’s court appearance. “There’s no politics whatsoever, there are no political considerations. The charges are purely based on the evidence that is contained in the docket.

“We gave it to a highly senior prosecutor within the institution with an impeccable record, to make that decision. Dr Torie Pretorius considered the evidence contained in the docket and firmly believed that she has a case to answer.”

So what about the timing?

“People must not cloud issues. The application brought against the president and advocate Jiba for the president to hold an inquiry, it’s a separate issue,” said Mfaku. It has no bearing as far as the criminal process is concerned.

“A docket was brought to the NPA. It was considered. It is only fair once we have decided to prosecute that we do so immediately after we have made that decision. We do not look at the circumstances around us, what is happening politically. We don’t time our prosecutions.”

Mfaku appears sincere, but his words sound hollow, particularly given that the NPA has previously admitted that senior officials actively sought to delay charging presidential hopeful Jacob Zuma with corruption in a bid to assist president Thabo Mbeki.

The so-called spy tape recordings of the then Scorpions boss, Leonard McCarthy, and the former NPA head, Bulelani Ngcuka, which ultimately won Zuma his freedom, arguably showed that senior state officials proactively tried to use the prosecution to achieve political ends.

The NPA at the time was at pains to stress that the case against Zuma was strong, but this political interference meant it could not continue. The legality of that decision will also be the subject of court proceedings this year.

Breytenbach’s and Booysen’s prosecutions are somewhat different because there is significant doubt over whether there is a case for them to answer. And hence, Glynnis Breytenbach is “chilled”.

“I am most certainly going to go ahead with the trial,” she says. “I have no desire to encourage them [the NPA] to reconsider their options. They had plenty of time. This docket was opened in 2012. They have had four years to sit and stew on it …

“I was cleared. Clearly the NPA thinks they have a better insight into the law than the chairperson of the disciplinary inquiry at that time, [Selby] Mbenenge SC. I wish them luck. It’s their good right to prosecute me. I’m no better than anybody else. The trial must run its course and I will prove my innocence.”

“I deleted a file which contained two letters relating to the Khumba [mining dispute] matter, but they were hardly evidence. It was correspondence between two policemen and an attorney, of which there are hard copies available at the drop of a hat. And, of course, everything that I did delete was on the server. They didn’t realise it, but when we told them about it, they scurried off to find it.”

The state says it has no new evidence against Breytenbach, other than what was led against her in the disciplinary inquiry.

It has also chosen to charge Wagenaar, her attorney, despite that same inquiry finding he was computer illiterate and would not have been capable of accessing any data on her laptop.

“We support Glynnis because we know that, if this happens to her, it can happen to anyone,” the DA’s Tshwane mayoral candidate, Solly Msimanga, shouted as he addressed the crowd gathered outside the Pretoria magistrate’s court.

The party has thrown its support behind her and refuses to bow to calls from the South African Communist Party and ANC to suspend her. This case, perversely, may prove to be a dream come true for the DA, potentially providing it with evidence that the NPA cannot and will not act without fear or favour.

There is blood in the water, and it’s not hers.