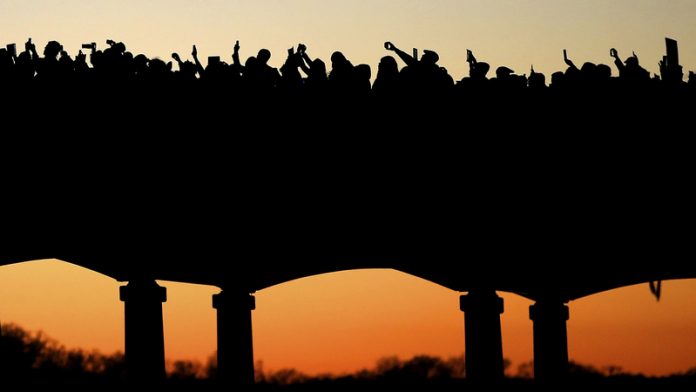 Ralph Ervin remembers the moment he knew he would spend the rest of his life in the poorest county in Alabama in the United States, locked in a struggle for a fundamental right.

It was 1971. He sat in a college class in north Alabama and listened while his history professor, a black man, admonished his students for not grasping their own power.

He used hard language: “You all are just as stupid as those niggers down in Wilcox County,” the professor said. Wilcox was Ervin’s home county. “They have a majority black population and won’t even elect anybody to hold political office.”

Ervin sat back, stunned. Not by the language, but by the ideas.

“It was shocking because it was true,” he said, sitting on a wooden bench in the local courthouse.

There were all sorts of constraints on black voters in Wilcox County at the time. Many people still worked as sharecroppers, and knew that if they were caught voting they would be thrown off the land.

“But even so, he was right,” Ervin said. “I knew then I wanted to help people back home.”

It was an absurd decision. Ervin was descended from slaves and took his family name from the Ervin plantation, which still looms over Wilcox County today. He grew up poor, with an outhouse. “And a slop jar,” he said, with a wry laugh.

Life was hard, but he was a bright child and he had made it out, escaped to Alabama Agricultural and Mechanical University – and no one ever went back to Wilcox County. But Ervin did. He wanted to help the citizens realise the power of the ballot.

That was the beginning of his career. Now, as Wilcox County’s circuit clerk – its highest administrative position – he has reached the end of it. He still stands almost two metres tall when he needs to, but he walks with a cane. He speaks with a voice that sounds like thunder or honey, depending on his mood, but he prays nightly about retiring. He thinks fondly about tending his cows.

Representation of black voters jeopardised
But the same old fight won’t let him go just yet.

A series of recent government manoeuvres in Alabama has hit Ervin and his constituency with a combination punch that may prevent people from voting across large swaths of the state, particularly in poverty-stricken areas.

The first blow came a year and a half ago, when Alabama enacted a law requiring voters to present government-issued photo identification at the polls. The second came five months ago, when the state shut down dozens of driver’s licence issuing offices, leaving 28 counties with no way to issue the most common form of ID.

African-Americans in Alabama line up to vote in the 2008 presidential election, in which Barack Obama
made history by becoming the country’s first black president. (Mario Tama, Getty Images/ AFP)

The Republican governor, Robert Bentley, said the office closures were just a way to trim the budget. Opponents said they were a political move that followed Alabama’s worst traditions.

After an outcry in the state capital, the government decided to allow licensing offices in some counties to reopen – for one day each month. But the cost of a driver’s licence renewal jumped more than 50%. It may not sound like much – from $23.50 to $36.25 – but in an area crushed by poverty, it’s enough to force people to make hard decisions. “We are talking about the poorest of the poor,” Ervin said.

On Martin Circle in Camden – one of the poorest neighbourhoods in the US – a knot of young men glowered on a street corner. They didn’t have any thoughts on voting, they said, adding: “We’re felons.”

On another block, two men and a woman sat on a veranda and stared out at the street.

They didn’t have thoughts on voting, either. “Not me,” the woman said. “Man, I’m high as hell.”

Crime and drugs. In a place where poverty crouches on every doorstep and the poorest people share the same skin colour, viewing them as a monolithic bloc becomes easy. It’s quicker to assume they want the same things or face the same struggles.

But a few doors down from the stoned woman’s house, Clifford Martin (61) sat on the grass in his front yard, repairing a piece of siding from his little white house. He wore a shirt buttoned up to his neck and an alert look. Of course he votes, he said. He laughed. “I ran for mayor.”

No, he said, he doesn’t worry about needing a photo ID. He doesn’t fret about fees. None of that matters to him, he said, because half a century ago in neighbouring Dallas County, Bloody Sunday in Selma led to the Voting Rights Act, securing representation for black voters.

Determined to ‘find a way’
Back at the courthouse, Ervin reflected on the years since the Selma march of 1965. That he is still entrenched on the same ideological battlefield leaves him outraged.

As he talked, his voice shifted toward thunder: “Just in order to get the right to vote, we had to go through a poll tax. We had to go through taking a literacy test. We had dogs sicked on us. Fire hoses. People got killed,” he said.

“And once we get the right to vote, here in 2016, you’re still trying to find ways to keep us from voting. We are citizens of the United States.”

Since the changes to Alabama law, Ervin has waged a personal campaign to overcome them, in Wilcox County. He arranges rides for people who can’t get to the courthouse or to polling stations. He preaches the intricacies of bureaucracy: people can bypass the driver’s licence offices, he tells them, and pick up a voter identification card at the registrar’s office. They just don’t know how. So he gives them instructions and guides them though the process.

Across the state, half a million voters – one in five – don’t have a photo ID. And even when they do, in the more impoverished areas, people don’t have cars. When Ervin needs to gather a jury of 12 county residents for a trial, he said, he regularly sends out more than 200 subpoenas, because so many candidates will be struck from jury duty because they have no transportation.

But, Ervin said: “Everything they have thrown at African-Americans, or poor people, we find a way around it”.

Working cars are so rare in Wilcox County that people have developed a local ride-sharing economy – Uber for the destitute – and they hitch rides across the vast expanse of the landscape. As photographer David Levene and I arrived in Wilcox County, we hit a 72km stretch of road with no petrol stations and I ran out of fuel. On the side of the road, I raised my hand and, as though I was hailing a taxi, the first car to pass stopped and offered us a ride. It’s expected here.

“The Bible says: ‘The poor you will have with you always,’” Ervin said. “So that lets me know my work will never end.”

As he left the courthouse for the day, he exited by the front door. He never leaves by the back door, he said.

Outside, on the old courthouse square, he pointed to something on the corner, standing as far from the building as possible. It was set in concrete and rose just over knee high, almost hidden among campaign signs. It’s one of the last physical vestiges of the Jim Crow “separate but equal” laws in Wilcox County, he said: a water fountain for black people, because they were not allowed to drink from the one inside the courthouse when he was a boy.