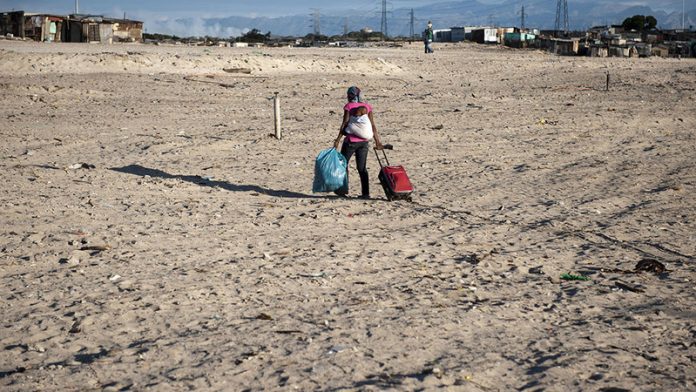 So much in what Finance Minister Pravin Gordhan announced to Parliament in his budget speech on Wednesday was pleasing, such as the myriad developmental accomplishments, and yet so much more is truly ­horrifying.

Apparently, achieving a balanced assessment is beyond most commentators trying to steady our feet on the SA Titanic, what with world financial markets roiling the rand.

In spite of bending over backwards to meet financial markets’ demands for a lower budget deficit (he promised just 2.4% of gross domestic product by 2018, down from 3.8%), Gordhan was pummelled by an immediate 3.2% currency collapse in the minutes after he spoke.

Frankly, most of us who pore over the budget speech are, in class terms, petit bourgeois or above. That’s revealed in the kinds of budget reviews that dominate media such as the  Mail & Guardian .

When at theconversation.com a normally humane, democratic political scientist like Ongama Mtimka blithely praises Gordhan because “the increase in social grants continues to provide a social security net to millions of South Africans, keeping them out of extreme poverty,” he subliminally ignores the substantial after-inflation cuts to poor people’s grants.

So does another Conversation contributor, Leon Schreiber, when he says: “The fact that government has avoided cuts to social assistance grants is a politically shrewd move.”

Lads, here’s a fact check: Gordhan provides just a 3.5% nominal increase to foster care providers (who play such a vital role, given our catastrophic Aids orphan rate) and a 6.1% rise for mothers who are child support grant recipients. These poor families face double-digit inflation this year thanks to food, electricity and transport hikes.

So Gordhan’s “real” – after-inflation – cuts to welfare grants of several percent hurt us (in the petit-bourgeoisie) the least, yes, but 16.5-million recipients from South Africa’s lumpen-proletariat will struggle to find more holes in their frayed belts to tighten up, given that 63% of our compatriots – mostly women – already live below the poverty line.

Reality check: what Tito Mboweni in 2013 termed the “very costly” NDB – for which taxpayers in each of the Brics countries will cough up $10-billion in capital – is run by hard-core neoliberals best known for privatisation and high-interest monetarism. The nonsensical “Africa rising” meme has come to a crashing end thanks to post-2011 commodity price implosions.

The continent’s current account deficit is soaring since excess multinational corporate profits are expatriated so quickly, not only through illicit financial flows (knocking South Africa for R330-billion a year since 2004) but also through licit outflows, because exchange controls have been removed.

And partly as a result, Africa’s foreign debt has doubled since 2006 to $400-billion – just as South Africa’s has doubled to $145-billion since Gordhan first took over the finance portfolio in 2009. That puts the continent back in the 1980s when fears of a developing countries debt crisis drove finance ministers into self-destructive fits of austerity and structural adjustment.

And so, directly as a result, the chaps who really yank Gordhan’s chain are not those of us in the vain intelligentsia overflowing with advice, praise or critique.

Let’s worry more about upper-class twits running Standard & Poor’s, Fitch and Moody’s international credit rating agencies, and financiers such as New York-based Goldman Sachs, which helped raid our currency on January 11, sending it to R17.99 to the dollar in a few minutes of flash-crash speculation, just after telling its traders that globally, the rand’s decline is the bank’s second most aggressive bet for 2016 (after the dollar’s rise).

These men can obviously be charged with malicious economic self-interest to the extent that in coming months it is likely they will hit Gordhan with junk-minister status. To that end, they’re still selling our currency short.

But, more complicated than mere ill will, recall that back in 2009, when International Monetary Fund managing director Dominique Strauss-Kahn advocated deficit spending to save world capitalism from implosion, Moody’s actually upgraded Gordhan after his soaring 7.3% deficit-to-GDP rise that year by raising our credit rating from BBB+ to A-. With similar wild abandon, Moody’s clowns also rated Lehman Brothers as “investment grade” just days before it crashed.

But now we see the impact of their turn from the whimsical to the wicked. Partly to their credit, these agencies have put pressure on Gordhan to throw cold water on President Jacob Zuma’s $100-billion nuclear follies. And to Gordhan’s credit, he dodged that round of Russian roulette by kicking the bullet over to Energy Minister Tina Joemat-Pettersson to do “preparatory work for investment in nuclear power.”

But what else might be pleasing to a lefty like me, twice trained by Gordhan in Marxist revolutionary theory alongside Natal Indian Congress youth at Mahatma Gandhi’s Phoenix ashram 31 years ago?

On the horrifying side, Gordhan announced a whopping R600-million increase in funds for the notorious public order policing unit – the unpunished Marikana hit men who joked about defective muti while planting weapons on their victims – instead of replacing it with skilled peace-broking units.

But on the other hand, this remark was uplifting: “Spending on defence, public order and safety services will rise from R172-billion this year to R204-billion in 2018-2019.”

Pleasing? Yes, because without being blatant about it, Gordhan just chopped out R8-billion of securocrat funds compared with Nene’s medium-term budget allocation last October.

But it was when Gordhan bragged of the state’s most active spending that leaders of my residential community grew furious. After living on Durban’s Bluff for the past seven years, the highlight of budget day was reviewing the carnage with the South Durban Community Environmental Alliance in a long strategy session two hours after Gordhan finished speaking.

In the basement of a Wentworth community hall that Gordhan himself once frequented, as rusty fans blew Durban’s humid air back at us, two dozen hardened activists of all races, classes, genders and ages mulled over his generosity towards Transnet, and how that will ­ultimately be etched on our wretched landscape.

Gordhan would not be the first politician accused of pandering to the KwaZulu-Natal construction mafia by turning a blind eye to repeated collusion and overpricing here.

The current outrage is Transnet’s racist rerouting of the often exploding pipeline that doubles petrol-pumping capacity to Johannesburg from the Engen and Shell/BP plants here at Africa’s largest refining complex, sandwiching the Indian suburb of Merebank, whose Settlers Primary School has an asthma rate that was not long ago measured at 52%, the world’s highest.

When Mtimku celebrates that Gordhan’s “investment in infrastructure aimed at stimulating the economy is continuing, with over R870 billion planned,” he should first dissect how much of that vast sum goes to Zuma’s KwaZulu-Natal white elephant breeding project.

And fossil fuel prices have hit the floor, casting a dark spell over Gordhan’s bragging that “work has begun on a new gas terminal and oil and ship repair facilities at Durban”.

He continued: “We need to accelerate infrastructure investment in the period ahead. So we must broaden the range and scope of our co-funding partnerships with private-sector investors. In taking this forward, we are able to draw on our experience in road funding concessions.” Oops, he hasn’t been briefed by Premier David Makhura about the impact of those concessions on the ANC’s Gauteng voter base.

Worst of all, violating both climate and economic common sense, Gordhan bragged about Transnet’s financing of the lead presidential infrastructure co-ordinating commission project, with its planet-threatening goal of rail-to-ship transfer of 18-billion tonnes of coal.

That Waterberg-Richards Bay line – also costing in the hundreds of billions of rands – may have looked profitable in 2008 with coal at $170 a tonne, but now the price is $50 a tonne. Yet the project trundles on.

Further south, describing frustrating delays in getting Durban’s dig-out port up and running in 2012, Toyota boss Johan van Zyl (whose plant is adjacent to the old airport site) complained: “If return on investment is the line of thinking, we may never see the infrastructure.”

Amid rumours of a two-year dig-out port delay, in December Durban Chamber of Commerce and Industry president Zeph Ndlovu insisted on adding this large white elephant to the herd: “We have to press ahead and if we are to unseat our competitors up north, we can’t win this battle if we pull back every now and then and look at accounting principles.”

Whether Gordhan goes ahead with reducing the state payroll by tens of thousands of public servants or continues his nudge-nudge-wink-wink towards corporations’ illicit financial flows, it’s in the coddling of accounting-challenged KwaZulu-Natal cronies and the crackdown on welfare grant recipients that Gordhan has most decisively intervened in South Africa’s world-leading class struggle. Pleasing to some, yes, and hopefully horrifying to most.

Patrick Bond is director of the University of KwaZulu-Natal’s Centre for Civil Society and a professor of political economy at the University of the Witwatersrand. (This article was adapted following theconversation.com’s reattribution of quotations.)

Social partners at Nedlac agree to help to turn Eskom around