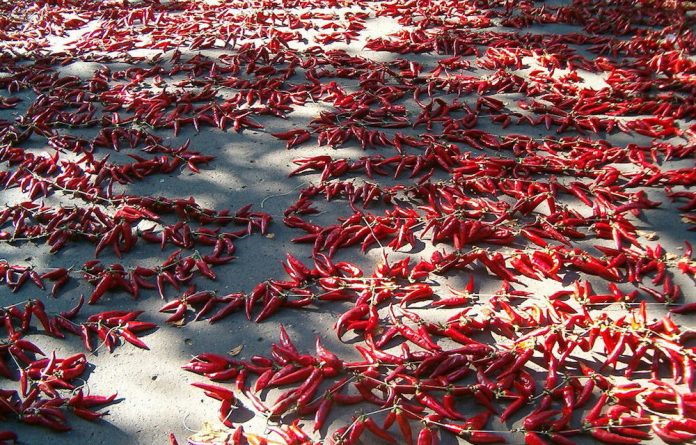 An Israeli irrigation specialist who ran a R150-million paprika scheme in the Northern Cape, described as “the jewel of land reform”, has blamed its spectacular implosion on the provincial government’s failure to deal with unruly and criminal elements who stole millions of rands of farm equipment.

Gil Arbel, of the company Gili Greenworld, who conceived and ran the scheme for eight months, said racial tensions and unresolved land issues were also central to the collapse of the project at Goodhouse in Namaqualand. The irrigated farm was intended to “green the desert”, creating up to 1 500 jobs and generating R70-million a year in foreign exchange earnings.

After receiving R150-million in grants and loans from the Northern Cape government, the national agriculture department, the Land Bank and Eskom, it fell apart in 2004 after two years of operation.

Other have blamed mismanagement. A rare frost in the second year of production appears to have contributed to cash-flow problems.

The project is back in the news after the Northern Cape auditor general revealed in his 2014-2015 report that R34-million of government investment had been written off, as well as R9-million in irregular expenditure.

The Democratic Alliance’s agriculture spokesperson, Ismail Oberay, said the government has never explained what happened to the scheme, and that he plans to raise questions about it as soon as the Northern Cape legislature reopens this year.

“The government has circumvented all the questions we have asked since 2009. I have asked questions in the agriculture portfolio committee and [public spending watchdog] Scopa. It’s like looking for a needle in a haystack,” Obaray said.

A report by the National Assembly’s agriculture portfolio committee, which inspected the project in 2005, found it had “completely collapsed” and cited then agriculture MEC Dawid Rooi as promising to launch a forensic investigation. He also undertook to form a new company.

The agriculture committee in the Northern Cape legislature later reported that the company would be allocated R5-million “to sort out the irrigation scheme”.

Asked whether an investigation was ever conducted and, if so, whether its report is available, the provincial agriculture ministry spokesperson, Ali Diteme, did not respond.

Instead, he suggested amaBhungane lodge a request for information from Hansard under the Promotion of Access of Information Act.

“The department has provided all the responses to the relevant committees of the legislature and we are quite satisfied as to why we have taken a bold decision to discontinue the project and write off some of the debt,” he said.

Obaray said, to his knowledge, no forensic report was ever tabled in the legislature.

The scheme envisaged that 51 farmers would grow paprika on 10-hectare plots irrigated from the Orange River in a kibbutz-style operation under Arbel’s management.

They were to supply a R45-million factory in Springbok, majority owned by the empowerment company, Pamodzi Investment Holdings, which would develop the Goodhouse Agricultural Corporation into the second-largest supplier of paprika to the European Union.

“If government gave land to individuals, one in a 100 would succeed”

The Land Bank and the Northern Cape government did not answer questions about their financial support for the project. But the portfolio committee report states that the farmers received government grants of R90-million, and a R57-million Land Bank production loan.

According to a land reform researcher, Kjersti Gjuvsland, the province invested R17-million in a 25% stake in the factory for the farmers, who would share infrastructure and profits.

In an interview, Arbel said the major problem was political and predated him: some farmers said the land was given to them by the British government, wanted individual title, and “did not want to be told what to do on their own property”.

“If government gave land to individuals, one in a 100 would succeed,” he said. “Small farms in such a remote area cannot survive.”

He said Rooi and former premier Manne Dipico agreed that the farm should be run as a co-operative “but could not control the situation”.

Gjuvsland reported that the farmers split into “pro-Gil” and “anti-Gil” groups, and the portfolio committee refers to conflict between old and new farmers.

The rift took on a racial complexion. The Mail & Guardian reported on a meeting in Goodhouse at which one farmer said: “Gil en sy fokken wit honde moet weg van Goodhouse” (Gil and his fucking white dogs – a reference to his two white assistants – must get out of Goodhouse.)

After a good crop in the first year, Arbel said, the farmers insisted on being paid before the servicing of the Land Bank loan. They also started to sell their produce for cash to “others than the factory”.

He reserved his sharpest criticism for the Northern Cape government, alleging that it “capitulated” to unruly elements. After eight months, he was told to “go away and come back after the [2004] elections”, while the politicians sorted out the problems. A year later the project was dead. “The MEC and the director general took over,” he said. “But politicians can’t farm. They look after their constituencies.”

In November 2003, 21 farmers cancelled their contracts. “We did all the work. We want to farm, not engage in politics,” a member of the group, George Cloete, was reported as saying in the M&G. “We cannot work with a bunch of criminals and opstokers [troublemakers].”

The remaining farmers took over the hiring of workers and payment of wages.

Arbel said vital resources, including kilometres of drip irrigation, pumps, filters and electric cabling used in the 555-hectare irrigation scheme, started disappearing. “You would see pipes being driven away on the back of bakkies,” he said.

The portfolio committee noted that “the project lacked proper security … resulting in abuse, neglect and wreckage”. It also found that individuals were “taking from the project for food security”.

Arbel said, after being ousted, he sneaked back to find goats eating the paprika pods. He complained that the nearest police station was 120km away and that the government failed to provide local law enforcement.

A new chief executive was brought in from Pretoria, he said, but the farmers forced him out after a year.

After Rooi was moved from the agriculture portfolio – Arbel claims because of the failure of the scheme – Tina Joemat-Pettersson (then the minister of agriculture) took over but also failed to rescue it.

Rooi, now the Northern Cape public works MEC, was asked detailed questions about Arbel’s allegations through his spokesperson, Crystal Robertson, but did not respond.

Asked about claims that money intended for the project was misdirected for his own use, Arbel said the government investigated him but found no wrongdoing.

On claims that the company reneged on promises to pay farmers a R500 monthly wage, he said they had received what was in the budget until they “killed” the scheme.

After almost a year of threats and attacks, a Wildcoast anti-mining activist was gunned down and killed in front of his wife and sons.
Read more
National

After almost a year of threats and attacks, a Wildcoast anti-mining activist was gunned down and killed in front of his wife and sons.
Read more
Advertising
Continue to the category
Politics