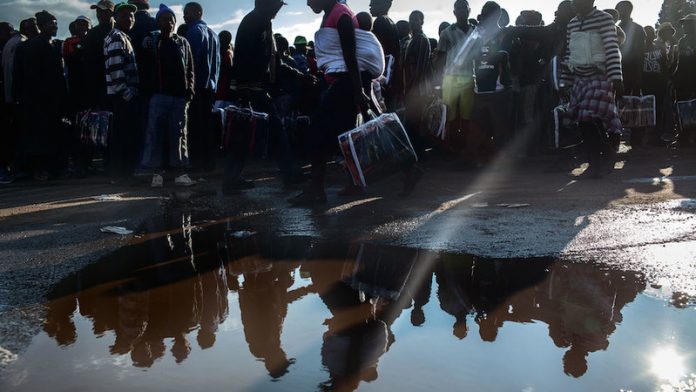 The government’s response to xenophobia has been dubious and superficial, local and international human rights organisations said following the release this week of a report on the 2015 attacks.

The report by the Reference Group on Migration and Community Integration, headed by Judge Navi Pillay, former United Nations Commissioner for Human Rights, contextualises the concerns relating to the violence in South Africa – from historical structural issues informed by the apartheid regime to societal threats such as perceptions, stigma the marginalisation of foreigners.

The investigation found that the cause of the violent attacks was the result of the deliberate efforts to drive away competition from foreign–owned businesses.

A state of inequality and prevalent poverty led to a “combustible environment”.

But even as the investigation was ongoing, and in the weeks leading up to the report’s release, foreigners have fallen victim to attacks in their host communities.

“Xenophobic attacks are no great mystery. There have been a lot of misconceptions about what’s behind them, ranging from threatened hyper-masculinity to lack of service delivery, which are part of the problem,” says researcher and former director of the African Centre for Migration and Society, Loren Landau.

Since the initial spate of attacks on foreigners that occurred in 2008, starting in Alexandra, Johannesburg, a second surge was seen in 2015, starting in KwaZulu-Natal and spreading to Johannesburg.

Most analysts and many Africans from other countries agree that the attacks have continued unabated in the interim.

Abdirizak Ali Osman, secretary general of the Somali Community Board of South Africa says: “The scourge of violence and xenophobic attacks, like the recent ones in Katlehong and Thokoza, have brought us to the conclusion that these attacks have significantly increased in South Africa and will continue if nothing is done.”

The board has a database of 100 Somali shop owners displaced in the last year alone. Osman adds: “Since last year’s attacks started in Soweto, we have not seen any improvement or any effective approach that the government has tried to tackle this issue.”

Landau says the Pillay report is critical in recognising the need to look into often messy local politics. “It is effectively a call for South African townships and politics to transform: to build stronger institutions; to forge a pragmatic, rights-based migration policy; to improve service delivery across multiple sectors; to hold leaders accountable; to promote civic values, etcetera.

“The question remains: Why would the government or others take on these challenges now when they haven’t – or haven’t effectively – for the past two decades?”

Trish Erasmus, the head of Lawyers for Human Rights’ Refugee Rights Programme, says the Constitution gives equal rights to citizens and foreigners, with the exception of the right to vote or hold political office, unlike most countries. But the law isn’t always implemented.

“We unfortunately do see gross violations of refugee rights taking place on a daily basis. We see your extreme cases where you have a very large prevalence of unlawful immigration detention practices. So, we see people being detained in conditions that are below minimum standards,” Erasmus said.

Foreigners face further threats to their rights as a result of state institutions who deny them access to healthcare or education. She says Lawyers for Human Rights’ legal clinics see cases weekly where migrants and refugees lodge complaints against frontline service providers, despite being legally allowed to use these services.

Currently, the biggest threat to refugees is a proposed amendment bill put forward by the department of home affairs, which suggests limitations for refugees to work. The bill is in Parliament awaiting a second round of debates before the end of April.

The exclusion that refugees and migrants face from government institutions has been ignored because it not visibly violent, unlike the images of burning shops and looting communities, she says.

Although the government’s National Action Plan to combat racism, racial discrimination, hatred of foreigners and related intolerance shows that xenophobia is on the national agenda, Ghelli says something must happen before another xenophobic outbreak ravages the country.

“It’s a chance for South Africa to be a leading nation, because xenophobia doesn’t only happen in South Africa; it happens globally; it’s getting worse and worse even in Europe,” Ghelli said.

“Seeing this interest of people actually wanting to speak out against xenophobia at a high level was amazing. I’ve never seen that before. But then again, now it’s died down, and maybe now, before it happens again, we need to do these kinds of initiatives.”