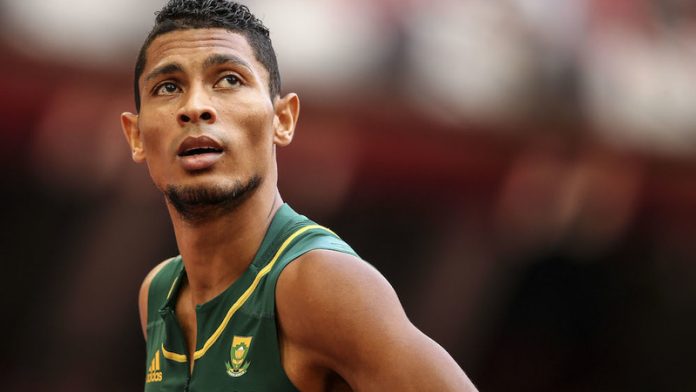 Although we’re talking on the phone, his voice changes an octave and, suddenly, we’re in goose-bump territory.

“Wayde [van Niekerk] has the ability to remove Michael Johnson from the history books – it’s that simple,” says Quinn, without breaking stride.

“In doing that, he can win in the 400m in Rio without doubt. I think Anaso [Jobodwana] has the potential to win bronze in the 200m and I think our 4x100m relay team are also capable of a bronze. Akani [Simbine, the current South African record holder in the 100m] can reach a 100m men’s final, that’s within reach for him, for sure.

Dredge Quinn’s name from the mists of time and you might remember that he was part of a 4x100m relay team that won silver behind the United States at the World Championships 15 years ago. Tim Montgomery was subsequently disqualified along with the rest of his team and, four years later, the South Africans were upgraded to the gold medal ahead of Trinidad and Tobago and Australia – a slightly surreal experience, according to Quinn.

“We got flown up from Cape Town for a press conference by Athletics SA and I don’t even think we were given our gold medals that day,” he says. “The real memories are of what happened in Edmonton, with 30 000 in the stadium and the thrill of being there and living those moments. That’s what I’ll always cherish.”

South African sprinting burst out of the blocks, believes Quinn, when Jobodwana made the men’s 200m final at the London Olympics four years ago. Usain Bolt has undoubtedly been a general influence and Quinn also suggests that the role of some savvy coaches – think Hennie Kriel at the University of Pretoria – have contributed to the explosion.

Kriel was Henricho Bruintjies’s coach when he ran 9.97 in Switzerland last year and, although Bruintjies recently started being coached by Werner Prinsloo, Kriel has a talented crop of youngsters in Pretoria, including hopefuls such as Clarence Munyai and Gift Leotlela, who might not even make the Olympic relay team.

“Anaso triggered it all in 2012 because suddenly guys knew it was possible to run that fast and in that company,” says Quinn. “He was an Eastern Cape boy studying at Jackson State in Florida in the US and he came out of absolutely nowhere. I come from the Eastern Cape and I hadn’t even heard of him.”

It’s one of the anomalies of the local sprint explosion that many of its foremost exponents seem to have arrived from odd places. There’s no traditional nursery (what Kriel is doing at Tuks is more of a finishing school), with Bruintjies coming out of the Boland and Simbine coming from Edenglen High in Edenvale, east of Johannesburg.

Simbine was a talented right-wing at school, playing semi-professionally for a team in the Vodacom League, but got gatvol because he found it cliquey and nepotistic.

By contrast, Jobodwana is a country boy, coming from Zwelitsha outside of King William’s Town in the rural Eastern Cape. The son of a retired prison warder, he’s on record as saying that he certainly wasn’t the quickest or most talented boy around, but he did have parental support and happened to find himself at some decent local schools. Importantly, he wasn’t all flash. He has lingered, hanging on for far longer than others more talented.

The revolution is all the more remarkable when one considers that formal institutional support from Athletics South Africa is negligible, and although the South African Sports Confederation and Olympic Committee do play a role, the brothers and sisters are largely doing it for themselves. If South African athletics does have a reputation, it is in middle, long and ultra-distance events – think Josia Thugwane and Elana Meyer – which makes the sprint thing even more strange.

It seems to have happened organically, a true revolution from the sport’s grassroots, which, thankfully, has little to do with the hopeless administrators.

Quinn, who describes himself as “older and overweight”, but does so in a way that suggests that he’s enjoying himself, is on tenterhooks ahead of the Rio Olympics. Being a former South African sprinter himself, he has only hope and surging pride for what’s happening, believing that this could truly be South African athletics’ year.

Meanwhile, it’s interesting to reflect that this grassroots revolution has happened by itself. There has been no heavy-handed intervention from the state, the federations or the authorities. Far from prying eyes, we suddenly have a crop of unusually gifted athletes. They might have come from nowhere, but they’re not going to stay there for very long.