How Africa Tweets is perhaps one of the most intriguing reports published every year on the Twitter trends, hashtags and online habits on the continent. Its 2015 findings revealed that Africans are increasingly using Twitter to talk about politics, with discussions on politics accounting for 10% of tweets in this latest report, which is published by Portland Communications.

That’s more than in the US and UK, where political conversations make up 1-2% of hashtags, about the same as Africa in the previous reports. Mark Flanagan, Portland’s senior partner for content and digital strategy, highlighted that in the past two reports, Twitter in Africa was “much more of a space for social interaction and frivolous banter. This study, our third, demonstrates that the platform is coming of age with the prevalence of serious debate about politics and government,” he said.

In fact, interest in politics and governance transcends national borders, and suggests that Twitter is providing a very “grassroots” form of regional intergration – even as vigorous resolutions and communiqués come out of high-level meetings on integration, but frequently remain merely soldered on paper.

For example, hashtags about the Nigerian presidential elections and conflict in Burundi were among the most popular and widespread hashtags on the continent last year. There seems to be a sense that Africans have a shared destiny, and what happens in one country resonates deeply in another.

“Excitingly, our report also hints at the coming together of Africans across boundaries to comment on and discuss common issues. How to successfully engage with these emerging pan-African online communities represents a challenge for all brands and organisations seeking to build their presence in this space,” said Allan Kamau, who leads Portland’s Nairobi office.

Mail & Guardian Africa dug deep into the report to hunt for emerging trends and quiet hints of how Africans interact with the digital space and with each other, and – in the broader sense – how Africa sees itself.

Here are the 10 big things we found:

2. More than 30 countries had the name of their own country as the top hashtag of the year – for example, Ghana’s top hashtag was #ghana, the same goes for #botswana, #ethiopia, #senegal, #rwanda and many others. On the surface this seems self-explanatory, as people would obviously be tweeting about what is happening in their own countries. But it also hints that Africans might be turning to Twitter as a way to give a local story some wings, to be “seen” internationally.

“This mystery is still one that puzzles us,” stated the report, as the far-reaching use of #FeesMustFall in Egypt, South Africa and Ghana is confounding, because geographically speaking these countries are on opposite sides of the continent.  “Because of this, the widespread popularity of #FeesMustFall could be seen as a sign of a pan-African collective interest in social issues, highlighting unexpected and unpredictable relationship between African countries and their ability to cooperate over some of the most important social issues affecting the continent,” the report states.

4. English is by far the most dominant language on Twitter in Africa. This lingua franca has helped bridge national and cultural barriers across the continent, providing Twitter conversations with a wider reach than those using conventional media. Of the top 5 000 hashtags analysed, 77% were tweeted in English. Other top languages like Arabic and French were tweeted significantly less – only 7% and 4% respectively. In other words, even in an Arabic or French-speaking country, people tweeted in English. 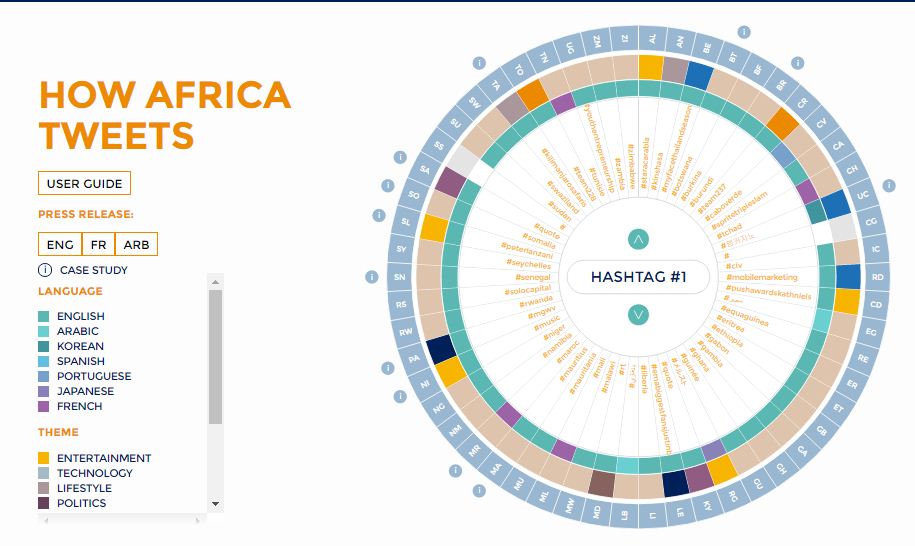 For full interactivity, go to HowAfricaTweets.com

Indeed, commentators have long observed the linguistic hegemony of English on the internet. A recent report by internet.org notes that just 10 languages account for 89% of websites (53% are in English). It seems that English represents not only the global language that most impacts employability, but freedom from restrictions of more rigid languages like French, a language that is officially monitored and regulated by the Académie française and its members known as “The Immortals”.

Yet, there is more to this story than simply the growing ubiquity of English. Africa’s new generation of young Twitter users are embracing a new type of international English: “Globish”, for example, romanisation of Arabic-Islamic terminology is commonplace, with #koran and #hadith proving some of Africa’s most popular hashtags.

5. Gabon is a French-speaking country in central-west Africa, but three of its top ten tweets had to do with events unfolding in Nigeria – #biafra, #freebiafra, and #freennamdikanu. There has been renewed separatist agitation in south-east Nigeria towards the end of last year, with calls and marches for the secession of Biafra, triggered by the arrest and detention of one prominent Biafra activist, Nnamdi Kanu. It’s interesting that this would have resonance all the way in Gabon, but there’s some history there – during the Biafran War (1967-1970), starvation was used as a tool of war; many children in Biafra were airlifted to relief camps and feeding centres in Gabon, Ivory Coast, and Sao Tome, and nourished back to health in these camps. It seems that some of these children were never repatriated back to their families in Nigeria, and one organisation, the US-based non-profit group Igbo League has undertaken the task of identifying and, if possible, reuniting these children – who are all adults now – with their loved ones.

Gabon is ground zero of finding the “lost children of Biafra”, so it is not altogether surprising that Twitter conversations tagged #biafra would trend there. Indeed, Gabonese President Ali Bongo has had to refute claims that he was adopted as a child from Biafra, and is not a natural-born son of former president Omar Bongo, as a controversial book by French author Pierre Péan claimed.

6. Interestingly, #BokoHaram was not among the top 10 hashtags coming out of Nigeria over the past year. The terror group continued with their indiscriminate attacks on civilians, including the razing down of the town of Baga in January that left an estimated 2 000 dead – which would make it the deadliest single attack in the group’s insurgency. More than 100 were killed in September in a series of bombings in Maiduguri, northeast Nigeria. President Muhammadu Buhari pledged to wipe out the group within three months upon assuming office, but the group’s strength endures.

But the lack of engagement on Twitter suggests some kind of social fatigue on the issue among Nigerians on Twitter. Meanwhile, #stopbokoharam was Cameroon’s seventh most popular hashtag of 2015, as the Cameroonian military stepped up the fight against the terror group in the northern border areas.

7. Angola’s top hashtag of the year was #kinshasa, which suggests that either Angolans feel some special affinity for the capital of DR Congo, or there are many Congolese in Angola tweeting about Kinshasa (or both).

8. Rwanda was the only country that had its president among the top ten hashtags on Twitter – #kagame was Rwanda’s second-most popular hashtag. It reflects the popularity of Rwandan president Paul Kagame on Twitter, and the surge in conversations following last year’s uncertainty and controversy about whether Kagame would remain in power past 2017 (he will). And while for the rest of Africa political conversations were around elections, in Rwanda, #umushyikirano2015 was among the top ten, an annual national dialogue in which government and citizens discuss development issues.

9. The most intriguing trend was that in some small countries, Japanese and Korean tweets were the most popular hashtags. In fact, the small island of Comoros had the highest level of Tweets Per Capita [TPC] of 0.77 across the continent, a surprise because it was much higher than countries like South Africa at a level of 0.29 with a population 529 times bigger. The high TPC and the prevalence of Japanese in the top hashtags was particularly strange.

Various theories were entertained – perhaps it was a resident Japanese national in Comoros, passing mariners, or was the island a preferred location for Virtual Private Networks?

The mystery was solved when it was discovered that all the tweets came from an individual from Japan who had lost his job. Tweeting every five minutes he had contributed over 198 000 tweets to the world, and during the research period, 99 000 geolocated tweets had washed ashore on the Comoros. This was more than tweets from Barack Obama, Narendra Modi, David Cameron, Vladimir Putin, François Hollande and even Justin Bieber combined.

His message was consistent: multiple hashtags, including #electronicwarfare, #gangstalking and #voicetoskull, were targeted at individuals who he accused of using electronic waves to force him to lose his job.

10. Comoros’ “Twitter-jacking” in this fashion is not unique – in the Central African Republic, four of the top 10 hashtags were Korean.

“Korean Twitter robots were quite prevalent in countries with low tweeting populations. These bots seemed to have taken advantage of an otherwise inactive Twitter sector in that country. In this case, there were a lot of Korean robots tweeting about Korean pop stars. It’s one of the interesting findings in this study that really surprised us,” Mae Dobbs, senior account executive at Portland Communications told  Mail & Guardian Africa.

Spam robots frequently have to change their perceived “location” as they are reported and shut down when they constantly spam. It looks like they use virtual private networks to try to get away with their spam, in this case, making it look like they are located in Comoros and not Korea.

“We are very interested in this trend, though, so we’re looking into it further in the future,” said Dobbs.

This story was first published on M&G Africa.