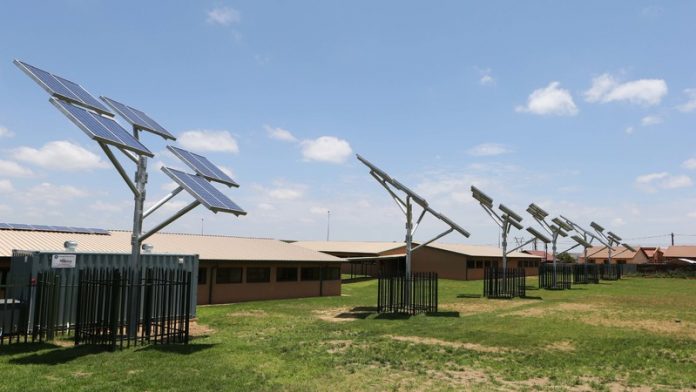 The New Development Bank (NDB) issued its first loans this week. Included in the first tranche was $180-million for Eskom that will be used to improve South Africa’s transmission grid and to aid the country’s renewable energy independent power producers programme, said the NDB.

It remains to be seen whether this money, and other funding, to improve the utility’s transmission infrastructure will ease some of the bottlenecks in connecting renewable energy projects to the grid.

In response to questions Eskom said that it and the NDB are still in discussions regarding the loan and that “negotiations are still at a preliminary stage”. Spokesperson Khulu Phasiwe said terms such as the rate and repayment period are being discussed.

The first round of NDB loans will support renewable energy projects in the Brics (Brazil, Russia, India, China, South Africa) countries. About $300-million will be lent, through the Brazilian development bank BNDES, to projects to generate 600 megawatts of renewable energy. China’s Shanghai Lingang Hongbo New Energy Development Company has received $81-million for roof-top solar developments, and India’s Canara Bank will get $250-million, with a first tranche of $75-million earmarked for 500MW of renewable energy.

Projects in the pipeline
An NDB spokesperson said many more projects are in the pipeline, including some in Russia, that are in various stages of consideration and appraisal.

The bank will launch its first bond in the second half of this year.

Leslie Maasdorp, the bank’s chief financial officer, said last month that the bond will be issued in renminbi, to a value of between ¥3-billion and ¥5-billion ($460-million to $770-million), according to China Daily, and it will be sold on China’s onshore interbank bond market.

Earlier this year, the Chinese central bank did away with quota restrictions on foreign investors in this market, opening it up to international institutional investors, including commercial banks and asset managers.

Almost 80% of the domestic bonds are issued by government-supported entities, according to Fitch.

Bank representatives have said since its launch that it will raise funds from a range of sources, and in local currencies wherever possible.

The bank did not answer questions regarding the rates it has offered to the likes of Eskom.

An asset manager, who asked not to be named, said some of the money for these initial loans may have come from the funds provided by the Brics nations to capitalise the bank. The bank has already received $750-million in paid-in capital from its founding members, which will amount to $10-billion after several instalments.

Scant details
According to Futuregrowth Asset Management investment analyst Conway Williams, although further details of the funding of the bank remain scant, the bank will start off by raising funding in China off the back of a strong institutional ratings, which in effect means lower borrowing costs.

It has been noted, said Williams, that the majority of the funding will be converted into US dollars to be used for various projects, with a percentage kept in renminbi to be used in China for local projects.

The news is a boost for the expansion of renewable energy, particularly in the developing world.

In Eskom’s case, the loan comes on top of other financial support from international institutions, particularly to support transmission infrastructure.

These include the cost of connecting projects to the national transmission network and are vital to achieve financial closure for renewables projects.

At the time, Eskom said this was a result of limited funds, because it could not issue binding budget quotes without financial provision being made through the multiyear tariff setting process.

The NDB loan follows a €670-million guarantee from the World Bank’s Multilateral Investment Guarantee Agency, which will back loans by two international commercial banks to Eskom to enhance its transmission infrastructure.

Eskom said it has to date connected 47 renewable IPP projects to the national grid, including those from the third bidding round of the government’s Reippp programme, and would continue to support the procurement of energy from independent producers.

The New Development Bank still has an advert out for the position of director general of its African regional centre, the post that was ostensibly earmarked for former finance minister Nhlanlha Nene.

The reason given for Nene’s summary axing from the ministry in December was that he was South Africa’s preferred candidate to head the regional office, according to the presidency.

Ironically, in the week that the bank announced its first round of loans for Brics (Brazil, Russia, India, China, South Africa) nations, it was announced that Nene has taken up a post in the private sector – on the board of the investment firm Allan Gray.

In a glowing statement, the company’s chairperson, Ian Liddle, confirmed his appointment.

“We are very happy to have someone of Mr Nene’s experience on our board,” he said, adding that “we are looking forward to his strategic and leadership contribution”.

In an interview with Business Day, Nene hinted that more posts in the private sector could be announced.

Meanwhile, the New Development Bank job is open to applications until May 2, should Nene change his mind.

Among the post’s requirements is a “minimum of 15 years of relevant experience, culminating in a leadership role and position of influence, in a multilateral development bank or equivalent or regulated private sector financial institution or government”.