#RUReferenceList: A violent response to a violent act 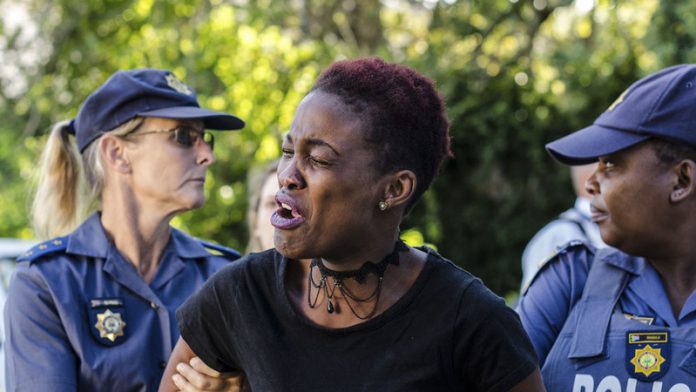 For three days women at Rhodes University wrested back their power, violently attacking the institutions that they believed protected their violators.

By Thursday afternoon the leaders of this movement had gone to ground, interdicted by the courts, beaten back by police and harassed by those named on a “rapist list” and their supporters.

The call for Rhodes to change its sexual assault policy started two weeks ago when #Chapter212, a student-led campaign, publicly challenged the Grahamstown university, saying it does not sufficiently support sexual violence victims and instead protects the alleged perpetrators.

But most of those at the forefront of #Chapter212 are nowhere to be found, evidence of how, in effect, this week’s events have silenced them.

Some of their Facebook and Twitter accounts have been deactivated, their phones are off and their whereabouts are known only to a trusted few. The trauma they experience shows how the problem goes beyond the Rhodes campus.

The release of the list on Sunday was a desperate attempt to get justice after the university’s system had failed victims of sexual violence.

It’s still not known who released it, but whoever it was probably did so because they felt there was no way forward. It was a violent action in response to the violence – both systemic and physical – that survivors of sexual assault have experienced at the hands of their violators and the university.

The Rhodes University sexual offences policy defines rape as an “unlawful and intentional act of sexual penetration with another person without that person’s consent”. At first glance, this definition seems legitimate. But how do those who have been violated prove this intent?

“How is a victim supposed to know that their rapist intends on raping them when the rapist themselves do not acknowledge their act is rape?” asks Gorata Chengeta, a politics honours student at Rhodes.

Because the victim has to prove intent, the onus is on them to make sure that the violation did happen.

The victim has to relive the rape for it to be believed. They must concern themselves with the details of times, dates, location and how they found themselves in the situation to begin with.

We need to interrogate what we have come to define as rape – it does not happen when someone is lurking around the corner, waiting with the full intention to hurt us.

In her poem Latent Rapists, American playwright and poet Ntozake Shange describes how the nature of rape goes beyond the “dark stranger” that we have been socialised to fear: “A rapist is to always be a stranger to be legitimate, someone you never saw, a man with obvious problems.”

But these men are not the ones raping and violating women at Rhodes. Rapists are known to us: they are our classmates, our lecturers – even our intimate partners.

They walk in the same corridors as we do.

According to the university’s policy, victims have four options to take a case further. They can:

It is not only the policy at Rhodes that is problematic and promotes rape culture, but the law in general. An alleged perpetrator is regarded as innocent until proven guilty. Victims who choose to report their cases face a losing battle – proven by the low conviction rate for rape in this country.

What about the lives of the many victims before them who have had no justice? It is not fair or right that the names of potentially innocent people were included on the list, but can we compare their circumstances with those of a victim?

The system is already skewed in the favour of the accused, anyway. Those concerned with the reputations of the supposedly innocent rapists should also be concerned that alleged rapists – convicted or not – are still able to get jobs and move on with their lives in this country. But the burden of the trauma and having to live with being violated in that way will stay with the victims forever.

Rhodes is no stranger to protesting against rape culture. The campus gave birth to the Silent Protest against rape and sexual violence. It was started in 2006 by a small group of gender activists wanting to stand in solidarity with “Khwezi”, the complainant in the Jacob Zuma rape trial. It has since expanded to other universities where, every year, a day is spent in showing solidarity with survivors of sexual violence.

The focus is now on Rhodes but this story is not unique to it, as seen when students at the University of Cape Town protested last year against the management’s lack of consideration when it came to victims laying charges against perpetrators of sexual violence.

Before that, in 2013, a number of University of the Witwatersrand lecturers were accused of sexually assaulting their students. A former Wits student, who was sexually assaulted by her lecturer, said she eventually stopped following up with the university because she did not feel adequately supported.

What is happening at Rhodes and at other universities is a microcosm of what happens in society – it exposes South Africa’s rape culture and the continuous burden it places on victims.

I stand in solidarity with the students at Rhodes and with outing the list, however controversial it may be, because in a world where the rape victim is least considered, what other recourse is left to them?

In many instances a person’s dignity, their humanity, has to take a back seat to everything else. For once, it is great to see that they are not the collateral damage.