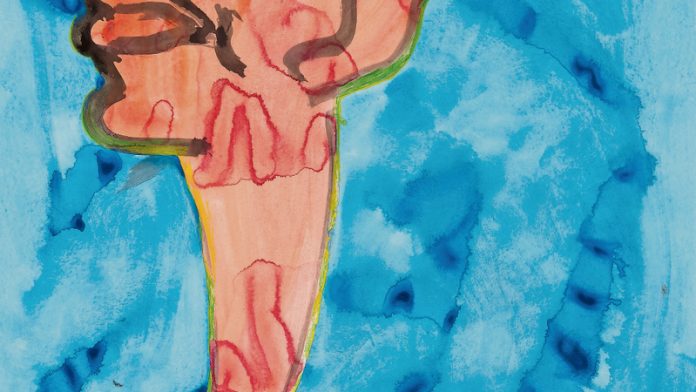 Abstract art is what it is not. It’s not always founded in linear logic. It misshapes reality. Rearranges it. Turns the tangible into something malleable. Saatchiart.com defines it as a medium “unconstrained by forms found in objective reality”. And in this way it can be understood as a variant of art that rests among the “purest forms of expression”.

On initial viewing, the installation in Moshekwa Langa’s Ellipses exhibition, at the Stevenson Gallery in Cape Town, is unsettling. Various sized shapes are covered in grey cloth, and smaller, colourful balls lie strewn amid the flat planes of material folds. It brings about images of hunched bodies crawling towards an unknown destination. A menacing unknown variable. The raised peaks are reminiscent of the goose bumps they induce.

Langa speaks to what he terms the “veiled landscape”, saying it refers to tombstones that have yet to be unveiled.

“It also speaks to hidden histories. It is made of light materials … a mournful landscape. Many episodes in my own short life led me to make just such an installation,’’ he says.

Langa, born in Bakenberg in Limpopo in 1975, made his name in the art scene in the late 1990s. He has been referred to as a conceptualist and a visual anthropologist.

The term “abstract artist” is also often bandied about when audiences refer to the aesthetic of his creations, although he doesn’t strictly subscribe to it. Instead, he likens his art to the interpretation of a poem.

“My work is not entirely abstract. It is made up of questions and asides from which I have added and subtracted over the years. It only looks abstract because a small section is seen at a time. Like a series of disembodied passages from a book. It is made up of excerpts, recordings, facts, flowers and dreamscapes. It is a nonfactual, nonlinear account of what interests me.”

Working in the abstract means opening yourself up to myriad interpretations about your work, says Langa. He claims that being misunderstood refers not only to the abstract but also to the nature of being an artist.

“There are easier, clearer and more precise forms of communication and being an artist is not one of them in my view. It is a contested free space.

“As an artist I want my work to be poetic, to reflect on things I find interesting, things that have informed my progressions and regressions, a kind of a capsule of the times I live in.

The gallery is compartmentalised, Langa’s canvases are sectioned off in different spaces within. The majority of his 38 works, including the installation, reside in a singular spacious room with the quintessential stark white walls.

A significant chunk of the art in this exhibition is named after townships in South Africa: Senotlelo, Mahwelereng, Ga-Mphahele, Sedibeng. The country’s history is being documented in art. A history which has been lost and overwritten over the years. On one hand it attests to their existence; affirming that people are living there. Even Masalanabo, the second Rain Queen of the Balobedu tribe, makes an appearance.

On the other hand, because it is abstract and so up for interpretation, it allows room for the subjective stating of that history. For the nuance of perspective.

When asked about his sentiments on distraction, about the idea that his work remains broken, he speaks of things that strive for congruency but remain incongruent, pieces from different puzzles that don’t necessarily fit. The idea that a swinging pendulum alternates between him driving the work while it simultaneously drives him.

“I prefer to lead, but I let myself be distracted and led at times. It produces an interesting cacophony. If I knew I was writing a story whose traction was worked out in advance, I would probably be content.

“However, I am more excited by the process of discovery and unpredictable situations and outcomes,” he says.

Ellipses is on at the Stevenson Gallery in Woodstock, Cape Town, until May 28