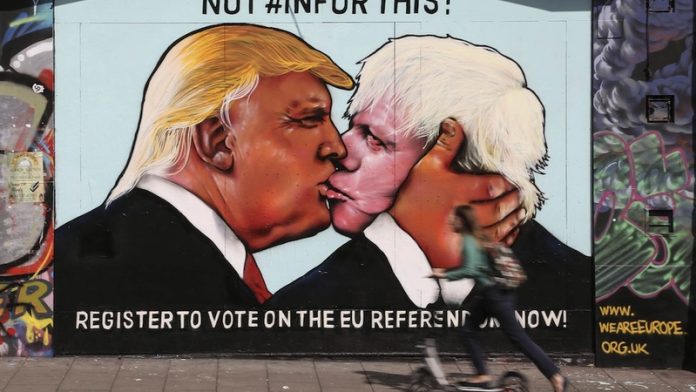 Throw away the blueprints, shred the templates. Have no expectation of something being like it once was. It won’t be, it can’t, and maybe it shouldn’t be. Democratically elected governments worldwide are finding democratically accepted ways to defuse democracy. And maybe the people have fallen out of love with that blueprint – that once everyone has representation in society, everyone will be looked after.

Generations today have not experienced the horrors of total war, the last of which ended in 1945. Reality television has now proved that he who dictates will deliver and, if you don’t make the grade, you’ll be fired.

The European Union has been fired by one of its members and, as a result, the United Kingdom is having a nervous Brexit. They say democracies have a habit of vomiting up the worst in a nation, especially when the nation asks for it.

It has been a comfort to hope that, if the people lead, the government will follow. The UK in this case proves the point. Prime Minister David Cameron based his political future on a “remain” vote and lost. He is resigning.

Here, in South Africa, when the highest court in the land exposed unconstitutional executive action, no one resigned. Some even giggled.

I remember our most recent referendum back in the 1990s when President FW de Klerk challenged white South Africa to decide: “yes” to change, or “no” to a future. He won the support of the majority of the minority, which led to the legalisation of illegalities and so ushered in the unthinkable. Many whites said: “This is goodbye and totsiens to civilisation as we know it. It will be the end of our white nationalist Christian society.” Ja nee.

Those naysayers were wrong because they were right (wing). Which makes me wonder whether the “leave” voters in the UK reflect many of the same prejudices and racist fears that we also harboured and protected when we were a pariah state and exited the world.

So let Brexits be bygones. My friends in London are certain that soon a new prime minister will have all the right systems in place for the UK to make a clean break from the EU. Others in Europe laugh and say: “Hang on, Britain. You left us. Now get into the queue. We have to first sort out the foot-and-mouth disease among cows in Romania and the overlarge grapefruits smuggled into the EU through Latvia. We’ll get back to you in … say … 2036?”

Does this now mean that more Brits will empty their piggybanks and come to South Africa where, despite the financial speed wobble of June 23, they will still be able to buy a R10-million villa in Clifton for £495 000?

Change is never easy or comfortable unless your army invades a country and kills everyone. The will of the people is not something to encourage carelessly. Before you know it, there will be a replay of Christians and lions in world arenas, with Muslims cast as food for the big cats. It is said that, in an upside-down society, the lowest common denominator floats on top.

Most British voters who supported the “leave” faction probably didn’t even read the small print. They just wanted to get rid of the amakwere-kwere down the road: Poles up the pole, Germans in the bar, Greeks in the café, Somalis in the ditches and Syrians in the queues. Muslim is now the new black.

South Africa managed the control of unwanted elements “legally” and some even say “democratically”. Those apartheid laws were passed in an exclusive Parliament for whites only and, for 46 years, from 1948 to 1994, our Brexit was held at bay. When it broke, the tsunami of change drowned our complaints with bribes, compromises, free sausage rolls and political correctness. Our Brexit was also hailed as the beginning of the rest of our lives. En kyk hoe lyk ons nou!

So who knows? The ballot of August 3 looms closer as the flames of anger soar. Red banners and berets wave in the winds of change. If a careless and lazy reaction to the municipal election results in a business-as-usual corruption of hopes and expectations, we might soon meet again at the Greek-Croatian border with a tattered Pick n Pay bag in our hands, hoping for a job in Hamburg as a nanny to some overweight German children.

Meanwhile, the Irish Republic will have merged with Northern Ireland, both part of the EU, with a happy wave towards their independent Scottish allies, beyond the sulking glare of the isolated Welsh.

The remains of what once was a Great Britain could then join the African Union if they felt too lonely. That would be home from home for all those now seen as unwanted immigrants because the British Empire ruled their world once too.

So expect the worst hoping that the worst will never be as bad as you imagine. That’s the new definition of optimism. Cartoonists, satirists and pundits sigh with relief. Now get ready to welcome President Donald Trump into the White House and Prime Minister Boris Johnson into Number 10 Downing Street.

Do you think they share a hairdresser with German Chancellor Angela Merkel?

Pieter-Dirk Uys is a satirist and writer. Visit pdu.co.za

Covid-19: An opportunity for universities to regain public trust

How the Nigerian and Kenyan media handled Cambridge Analytica