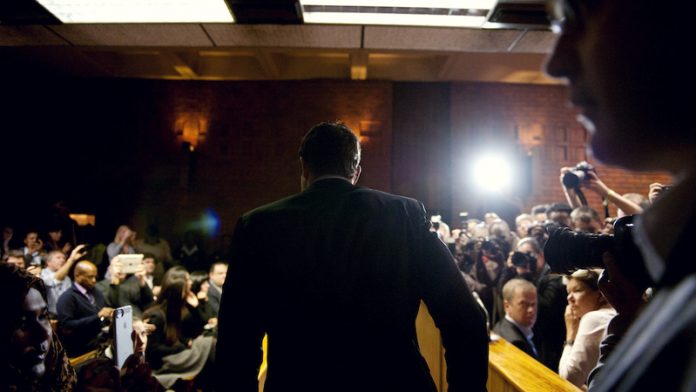 Former Paralympian gold medalist Oscar Pistorius has been sentenced to an effective six years behind bars for the murder of his girlfriend Reeva Steenkamp three years ago.

Judge Thokozile Masipa said she had taken into account the fact that Pistorius had already spent a year behind bars, as well as his disability.

These factors justified her deviation from the minimum prescribed sentence of 15 years for murder.

In December last year the Supreme Court of Appeal in Bloemfontein overturned his conviction of culpable homicide and converted it to murder.

During sentencing proceedings in June, state prosecutor Gerrie Nel said Pistorius had not shown remorse for shooting Steenkamp through a locked bathroom door at his home.

He also criticised the former athlete for agreeing to be interviewed by a British broadcaster, but refusing to testify in sentencing proceedings.

#OscarPistorius Masipa thanks everyone – we adjourn. She will hear today if anyone wants to appeal.

Defence lawyer Barry Roux painted Pistorius as a broken man, and instructed Pistorius to walk across the courtroom on his stumps to demonstrate just how vulnerable his client had been on the night he shot Steenkamp, believing she was an intruder.

Steenkamp’s parents Barry and June were both in the packed courtroom on Wednesday morning, listening intently as Judge Masipa passed sentence.

Judge Masipa summarised the evidence of Professor Jonathan Scholtz, who had assessed Pistorius’s mental state. She said Scholtz had said Pistorius had shown signs of post-traumatic stress disorder and would not be able to testify in sentence proceedings. Further, that he should have been hospitalised.

She also referred to the personal circumstances of Pistorius. She said he had no previous convictions and had had both legs amputated below the knee at age eleven months. Masipa referred to Scholtz’s evidence that Pistorius had felt the devastating impact of his mother’s death when he was a teenager.

She also outlined the effect his parents’ divorce had on him at the age of six years old, and that his relationship with his father had been poor after the divorce.

Masipa said Scholtz had testified that Pistorius was not antisocial or psychopathic and had sold all his firearms. His views had been that Pistorius’s mental health had deteriorated since 2014 and included major depression and increased anxiety levels.

Further, Scholtz testified that his current condition warranted hospitalisation. Masipa said Scholtz’s report also dealt with traumatic events Pistorius had experienced in prison. But the judge said these experiences had not been substantiated.

Masipa said there was no way to test the veracity of Pistorius’s claims as he refused to testify himself.

“Murder is always a very serious crime,” she said.

She said the accused had said he believed Steenkamp had been an intruder, and had been on his stumps at the time of the shooting.

“A deadly weapon was used and the results were devastating.”

Masipa said she also needed to deal with the interests of society. She referred to the defence, pointing out that there was a perception that an argument had precipitated the murder.

“There is not a shred of evidence before the court that supports such a perception.”

Masipa said the court had no right to speculate against the accused. “There is no indication at all that the accused was in an abusive relationship.”

If there had been such evidence, she said this would have been an aggravating factor.

Masipa said it was not surprising that there was a high level of interest in the case, considering that both the accused and the victim had illustrious careers and were well known both locally and abroad.

She said Steenkamp was “young, vivacious and full of life for the future, a picture painted by her father and her cousin”.

Evidence had been that Steenkamp supported her family financially. “It was clear from the evidence that the Steenkamp family shared a very close bond.”

She said the evidence showed that their “pain runs deep”.

Masipa said the aggravating factors in the case included the fact that Pistorius had used a deadly weapon and had shot four times through a locked bathroom door.

Mitigating factors were that he had approached the bathroom door believing an intruder was in the house. At the time he felt vulnerable as he did not have his prosthetic legs on.

Masipa said he had tried to save Steenkamp’s life when he realised that she was behind the bathroom door.

She said she disagreed with Nel’s submission that the accused had shown no remorse. She pointed out that he had apologised to Steenkamp’s family and had tried to meet with them without success.

“It is my view that it must be one of the most difficult things for an accused to face the family of the victim and apologise.”

Masipa said mitigating circumstances outweighed the aggravating factors, allowing for a deviation from the minimum 15 years.

She rejected the state’s argument that the murder bordered on direct intent.

“Our courts are courts of law and not courts of public opinion,” she said.

In the present case public opinion was “loud and persistent” but could not influence the court.

Pistorius was a good candidate for rehabilitation, and that his desire to do charity work was “a noble gesture”. She further said he was a first-time offender and was not likely to reoffend.