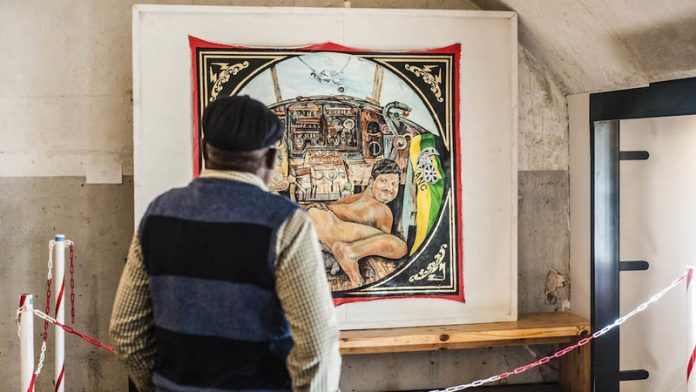 When President Jacob Zuma was portrayed with his genitals exposed in The Spear in 2012, Brett Murray’s painting was defaced twice and large crowds gathered to protest.

When Zuma was portrayed licking the anus of Gupta family patriarch Atul this week, the South African Communist Party (SACP) said it was busy with other stuff right now, and would maybe get around to commenting on it over the weekend.

“When things [such as this] happen, they find us in the midst of a programme and we don’t just stop a programme to shift our attention,” said spokesperson Alex Mashilo.

The SACP had a rally in Standerton on Sunday, Mashilo said, and it might raise the issue there – in the context of how the media was being used to demean other individuals.

The party is not alone among the once-staunch Zuma supporters who were quiet or absent when artist Ayanda Mabulu’s latest offering was put on display at Constitution Hill in Johannesburg on Wednesday.

The exhibition, titled Post Its No. 1: Post-apartheid/Postcolonial, is technically a group affair, but all attention has been on Mabulu’s Zuma-Gupta sex act picture.

He hates Zuma, Mabulu has explained, and considers him “a rapist in many ways”.

Images of the painting quickly trended on social networks.

The various other organisations that, four years ago, had either deplored The Spear or threatened violence because of it are absent from the current uproar. Outside political organisations, debate about the painting petered within days of its unveiling.

“There is not much that one can say,” said art historian Mpho Moshe Matheolane of the painting. “It is not even that the conversation is about the politics of respectability or anything like that; the aesthetic strength of the work is that it uses the same formula over and over.”

The exhibition is due to run until July 24, nine days before the local government elections.