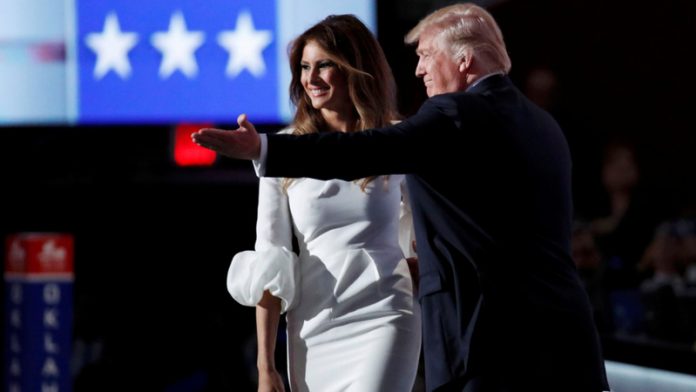 Aspiring first lady Melania Trump’s speech at the Republican National Convention in Cleveland on Monday contained a section strikingly similar to that delivered by current first Lady Michelle Obama at the Democratic convention in 2008.

“My parents impressed on me the values that you work hard for what you want in life; that your word is your bond and you do what you say and keep your promise; that you treat people with respect,” Melania, the wife of presumptive Republican presidential nominee Donald Trump, told the convention.

“They taught me to show the values and morals in my daily life. That is the lesson that I continue to pass along to our son,” she added.

“And we need to pass those lessons on to the many generations to follow, because we want our children in this nation to know that the only limit to your achievements is the strength of your dreams and your willingness to work for them.”

That small section of Melania Trump’s roughly 15-minute speech, a highlight of the opening day of the convention, was similar to part of Michelle Obama’s convention speech in 2008, in support of her husband Barack Obama.

This isn’t bad, this is ‘copying your term paper directly from wikipedia and leaving in the hyperlinks’ bad. #RNCinCLE

“And Barack and I were raised with so many of the same values: that you work hard for what you want in life; that your word is your bond and you do what you say you’re going to do; that you treat people with dignity and respect, even if you don’t know them, and even if you don’t agree with them,” Michelle Obama said in her speech.

“And Barack Obama and I set out to build lives guided by these values, and pass them on to the next generations,” she added.

“Because we want our children, and all children in this nation, to know that the only limit to the height of your achievement is the reach of your dreams and your willingness to work for them.”

A representative of the Trump campaign did not immediately respond to a request for comment. – Reuters