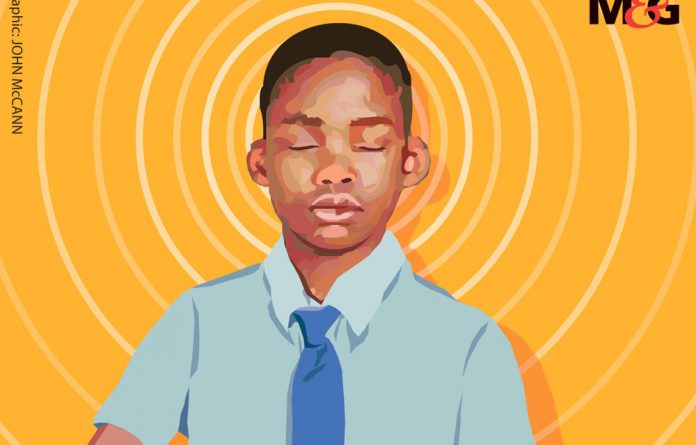 BODY LANGUAGE
A recent campaign saw primary school children on the Cape Flats, where gang violence, crime and poverty are rife, participating in a peace meditation.

They sat through a 10-minute meditation, facilitated by iMeditate Africa campaign volunteers of the Art of Living Foundation, an international nonprofit organisation that aims to promote global peace through stress reduction.

The exercise required the children to sit with their eyes closed, becoming aware of their body, breath and the space around them. They were taken through the basic steps of applying mindfulness.

Afterwards, they were reported to have told their teachers they wanted a “quiet time” session daily. They said they felt rested, energised and happy — and that they felt “very disciplined”.

As a daily practitioner of a simple series of breathing meditations, I can relate to this. But these encounters got me thinking. First, I have never thought of meditation or mindfulness in the context of disciplining children, perhaps because we think of discipline as punishment after a child has misbehaved.

A former teacher told me about successfully using breathing exercises with schoolchildren. The success, here, is in preventative discipline, using breathing to calm and centre pupils, to help prevent them from getting into trouble in class.

I interpret the Cape Flats childrens’ own testimony that they felt “disciplined” as being willing to listen and co-operate with the teacher, their classmates, the rules of their school, and so on.

I also began to wonder about the (perhaps unexplored) value of such meditation techniques in the debate about children and discipline.

Corporal punishment in schools and other public institutions has been banned for two decades now, but all indications are that it is still practised. Parents and caregivers could also be prohibited from smacking children, pending proposed amendments to the Children’s Act.

Carol Bower, one of the leading voices for positive discipline in the country, shared my suspicion that meditation might not have been explored in the debate on alternatives to smacking children, although parenting websites mention relaxation exercises as helpful in coping with the stresses of raising children.

The Children’s Act provides for parenting programmes as a form of child protection. The University of Cape Town’s Dr Catherine Ward, who specialises in the development of evidence-based parenting programmes, said mindfulness-based stress-reduction exercises are included in more recent programmes. These are said to help parents calm down and manage their own emotions, and to deal with chronic stress.

Clowns Without Borders-South Africa runs several such pro- grammes, which include elements of mindfulness-based stress reduction. For example, their Sinovuyo caring families programme, to reduce the risk of child maltreatment by parents in vulnerable families, uses simple relaxation activities borrowed from the mindfulness approach.

According to its executive director, Dr Jamie Lachman, research showed that parents found this helpful for reducing stress. He was not aware of other local parenting programmes using mindfulness exercises.

The Sinovoyo programme has reached 660 families with children between the ages of two and nine, and another 1 200 families will be reached in the near future. But this is a drop in the ocean when we consider the large number of families raising children where there is structural poverty, crime and violence.

If such exercises calm the bodies and minds of parents, why not children?

Dr Shaheda Omar, the clinical director of the Teddy Bear Clinic, said trauma training has taught her that breathing exercises are constructive, and to help release pent-up emotions. She believes these would be “an invaluable tool” to implement in schools, and to help parents to mediate anger responses that could result in physical assault, corporal punishment, or humiliating or ignoring children.

The use of a positive form of discipline is not a one-recipe topic, Bower said, and academic colleagues such as Ward and Lachman would point out the need to evaluate and adapt such approaches to be relevant to local cultural contexts.

The last words go to the grade six children of Portia Primary, Cape Town, who wrote a letter to the volunteers to thank them for introducing them to the breathing exercises.

“It was a wonderful experience. We felt so happy and peaceful and calm. It was as if all the troubles and bad things of the world had disappeared as we meditated.”

Charmaine Smith is an Art of Living Foundation volunteer for the iMeditate Africa campaign.

Mediation is an effective tool for conflict resolution

If you possess these 10 qualities, you might be a good fit for a high-stress job

Resilience: Secrets of the strong-minded