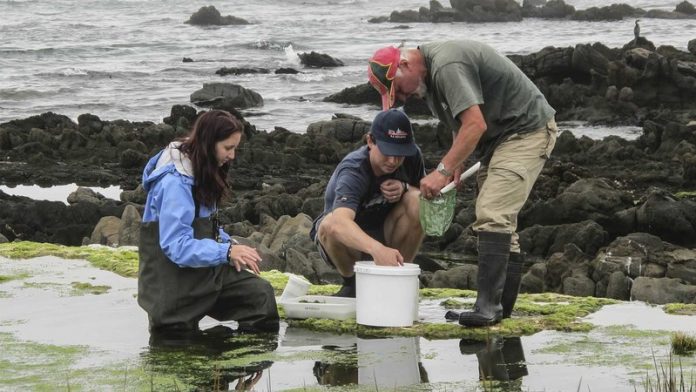 Nelson Mandela Metropolitan University (NMMU) is determined to play a role in developing South Africa’s blue economy — a move that will boost the country’s economy and create jobs — and is setting up key partnerships and qualifications to do so.

South Africa is bordered by ocean on three sides stretching 3 200km, and the university is intent on harnessing its untapped potential, in terms of research and skills capacity development, in a sustainable way.

The university has secured funding for a new Ocean Sciences campus, and already has a number of marine and maritime academic programmes underway.

The University’s marine-related research chairs include: Ocean Science and Food Security, the Law of the Sea; Shallow Water Ecosystems; and Marine Spatial Planning.

The four chairs fall under the South African Research Chair Initiative (SARChI), established by the department of science and technology in partnership with the National Research Foundation (NRF). Each offers extensive research opportunities and bursaries to postgraduate students.

Research Chair in Ocean Science and Food Security:Professor Mike Roberts ([email protected]). NMMU’s newest ocean-focused chair — a bilateral research chair between South Africa and the United Kingdom — is jointly hosted by NMMU and Southampton University, one of the world’s premier research institutes in marine and ocean science. The chair will play a key role in Operation Phakisa, with its focus on marine food security and aquaculture. As part of the chair’s research plan, Professor Mike Roberts is focusing on developing the Western Indian Oceans Upwelling Research Initiative.

Upwelling is the process that takes nutrients from the bottom of the ocean and brings them to the surface. Essentially, this process provides food for the bottom end of the food chain — such as phytoplankton and zooplankton — which ultimately provides nutrition for fish and top predators. This links with food security.

In May, several postgraduate NMMU students left for Southampton University. The chair’s first research trip, to collect data off Madagascar, will take place in November.

Research Chair in the Law of the Sea: Professor Patrick Vrancken ([email protected]). Unlike land, the sea is largely international territory. In the 1970s and 1980s, leading up to the adoption and coming into effect of the 1982 United Nations (UN) Convention on the Law of the Sea, marine law was heavily researched, but lost popularity as the world’s focus shifted to other matters.

The result has been a lack of research and reflection on this branch of the law — which needs to be addressed, with African governments becoming increasingly involved in the oceanic environment. A poor regulatory environment for the management of oil resources, for example, could have devastating repercussions for a neighbouring country. Other research areas include: state ocean jurisdiction, transnational organised fisheries crime, port law and marine tourism law.

This chair’s research projects fall into four key areas, the main one focusing on the iSimangaliso Wetland Park, which includes Africa’s largest estuarine system (Lake St Lucia). Research carried out by Professor Perissinotto is contributing to the removal of a “dredge spoil” island, which was man-made from the 1960s to the 1990s to prevent the Mfolozi River from running into the St Lucia Estuary.

Over 100 species of marine fish utilised St Lucia for breeding, but these have decreased dramatically because St Lucia is currently a closed estuary. Through the Mfolozi connection, there will be more recruitment. Another research area is the biodiversity of surface and groundwater in the Karoo. Perissinotto is also part of a team led by the South African Institute of Aquatic Biodiversity, which is studying coastal micro-inlets (minor estuaries).

The fourth research area is the rare coastal rock pools recently discovered in parts of the Eastern Cape (and existing in a few other sites worldwide), which exhibit rocky walls that grow through a bacteria-based process. According to fossil records, the oldest of these formations — known as stromatolites — date back 3.5 billion years. These bacteria-based systems provided the first photosynthetic process that led to the transitioning of the early Earth’s atmosphere into its current, productive, oxygen-rich state. Twelve postgraduate students are carrying out marine-related research in each of these areas.

The chair seeks to undertake research that will inform ecosystem-based Marine Spatial Planning in South Africa. As the incumbent Professor Mandy Lombard explains, the research that falls under the chair focuses on “zoning the ocean” for its various uses, among them fishing, aquaculture, gas exploration and marine protected areas. “It’s like the planning that goes into land use, but in the sea.”

Research under the chair focuses on three-dimensional ocean space, from the ocean floor to the surface, taking into account all the ecosystem activities that take place in the water column. With the government’s push to develop the country’s blue economy, the chair is also examining the different legislation affecting different zones of the ocean. “Trying to zone any activity in the sea is very complicated,” says Lombard.

The research will inform policy and management, particularly with regard to marine conservation strategies and adaptive management approaches, for the proposed Marine Spatial Planning Bill. Lombard said the chair takes the view that “everything is underpinned by functioning, healthy ecosystems”.