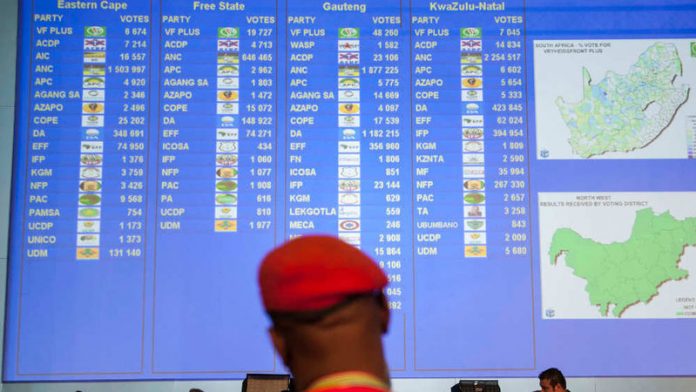 With just two days left before the local government elections, I haven’t as yet decided where I will place my “X” on the ballot paper, but I have a clearer picture in my mind of the things I will be voting for.

At 24, this will be my first time voting. Although I was eligible to vote in the 2014 national elections, I decided not to as I was apathetic about those elections, considering them a two-party race between the ANC and the Democratic Alliance, with the former poised to win as it had consistently done in years prior. The self-described “Marxist-Leninist-Fanonian” Economic Freedom Fighters had just made it to South Africa’s political landscape and, in my eyes, had little chance of attaining a good result at the polls but, to the surprise of many, it won 6% (more than one million votes) of the national vote and skyrocketed to the position it now enjoys as the country’s third-largest political party.

And now, three years after it was founded, it seems to be growing from strength to strength, enchanting the black working class and underclass of South Africa. The EFF has undoubtedly brought excitement to a once-dreary political scene (as evidenced by its antics in Parliament and the jubilant cheers whenever its commander-in-chief, Julius Malema, delivers speeches at the party’s rallies) and, in my opinion, has sparked a renewed interest in participatory politics. I also believe the party has contributed to the voter turnout, which in 2016, is expected to break the national record.

Its rise to power has restored my confidence in the country’s multiparty democracy, which we so often brag about, and is partly the reason I will be voting this year. There are more than 200 parties contesting this year’s local elections and the EFF has cemented its position among the “big three”.

A third option for voters means those in power can be held accountable and that there will be little room for a possible political monopoly (or duopoly, some may argue).

It also means a plurality of voices will be represented, even if it’s just at municipal level. This is a harbinger of a much-needed departure from “broad church”, politics in which parties present themselves as having the interests of all segments of society at heart and, in doing so, fail to meet the needs of the most downtrodden.

Youth unemployment
The 1994 elections remain a watershed moment in the country’s history and were vital in unshackling disenfranchised black South Africans from the brutality of apartheid.

But the black youth of today are beset with a new range of problems, in addition to the historical ones (economic exclusion and structural racism), which rhetoric and reminders of certain organisations’ involvement in the liberation struggle will not fix.

Plans to combat the “triple threat” of poverty, inequality and unemployment have featured perennially in post 1994 speeches and manifestos but, despite this, South Africa is still among the most unequal countries in the world and youth unemployment figures remain hauntingly high. Access to higher education is elusive for many young people, with universities hiking tuition fees yearly.

Employed youth aren’t exempt from struggles either, having to contend with issues such as “black tax”, which sees a portion of their salary being used to support their families, and race- and gender-based discrimination at the workplace. The spectre of migrant labour is also a reality many of these young people have to face as the bulk of the country’s economy remains centralised in major metros.

The ANC and the DA have both placed job creation at the core of their campaigns, with the former often reflecting on the gains made by its Expanded Public Works Programme in bridging the unemployment gap, but being vague about its future plans, and the latter promising an environment conducive to the creation of “job opportunities”, but scarcely elaborating on this.

The DA has, in recent years, embarked on a drive to attract black voters to its fold but has, ironically, failed to get into the heart of the core issues, such as the aforementioned, afflicting the electorate they have so fiercely pursued. It has also not said much about youth development and this bothers me.

Youth engagement
The ANC, on the other hand, seems to lack the political will to address these issues and, where it has made attempts to do so, progress is slow.

In contrast to its main rival, it has launched a campaign targeted at the youth, although I found this to be patronising as it was focused wholly on being trendy and making the party appear as if it is in touch with young people. For the past few weeks, my Twitter timeline has been inundated with pictures and videos of senior ANC members doing the “dab” (a popular dance the party has employed as part of its election campaign) as well as famous personalities getting behind the party’s campaign.

This is not, of course, not the first time the party has employed such strategies. As it compiled a house/kwaito CD entitled ANC Y Tjukutja for the previous national elections in an effort to attract young voters.

Although it is important to get young people revved up with the prospect of a better future, the youth vote will need to be courted with more than just T-shirts, promotional mixtapes, celebrity endorsements and politicians doing the dab.

Of the “big three”, the EFF has had the most convincing campaign and has been the most coherent. Their campaign has been centred on the changes they intend to bring at a local level, appealing directly to the aspirations of the working class. Among their drawcards has been putting an end to corruption, which they believe is exacerbated by the tender system.

They have also promised to increase employment with a decentralised, community-based approach and have steered clear of narratives suggesting the bringing about of change through a top-down manner and this has been popular with the party’s followers. What was most notable about their campaign for me, though, is that it has succeeded without the support of popular personalities and has mass appeal among the youth without relying on song and dance to get to get their message across.

Now, as I prepare to cast my vote for the first time ever, two things will be at the top of my mind: the disillusionment I still feel and the multipolar, robust democracy I envision for South Africa.

Ofentse Mboweni
Ofentse Mboweni is communications officer for the Grow Great campaign. He has a keen interest in South African politics and history, is an avid reader and loves anything to do with good hip-hop music, literature and afrofuturism. Described as a "blerd" and postmodernist by some, he prefers to be called OJ.
Facebook
Twitter
WhatsApp
Linkedin