​Plenty of maize, but not a grain to eat: How small farmers went hungry in Limpopo 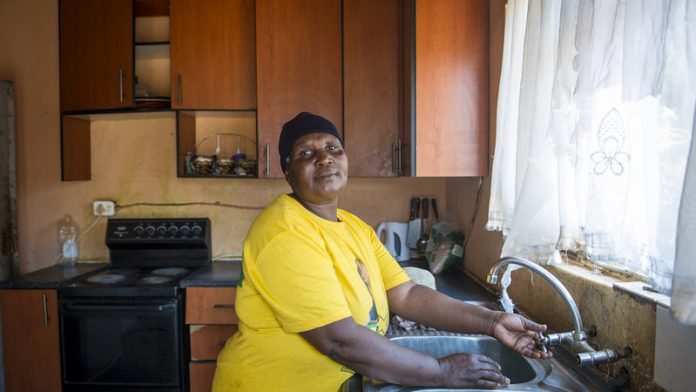 In the land of abundance, nothing could have prepared more than 5 000 small-scale farmers for the news that they could lose millions of tonnes of their maize that was already harvested and stored.

The drought played a part, but the real blow came when one of Limpopo’s biggest milling companies couldn’t pay its debts and had to enter business rescue. This means that tonnes of maize the mill is storing for rural farmers are locked away — and they can’t touch a grain of it.

Ngwanamosebjadi Chuene is 70 years old and has a family of 10 to feed. She clings to the hope that something good will happen soon.

“I don’t how long I have been with Progress Milling, but it’s been a very long time,” she says.

Every year she and close to 100 people from her village, Mooiplaas, would plough and then watch their maize grow, as well as their avocado trees and cabbages. Chuene has a hectare and a half, and over the years was able to send about a tonne of maize to the company to be milled and stored until she and her family needed food.

In March this year, everything changed. Thousands of farmers from Limpopo and Mpumalanga were called to a meeting by their trusted partner. The message was simple: Progress Milling was broke.

“My heart sank; I was cold,” says Chuene.

Sitting outside her modest white-washed home, with lemon trees and sugar cane growing in the backyard, Chuene didn’t want to speak about the many meetings she went to, seeking answers about her maize that’s locked up at the mill because the company is in business rescue.

One of her neighbours, Phuti Lekoloane (28), whose family has worked with Progress Milling for about 50 years, says each generation of his family has had a connection to their farm and the company.

“My mother used to also work on the farm after school and it’s part of our family, so when we were told this [about the mill], it was devastating,” he says.

His extended family owns about 300 hectares in Mooiplaas, about 40km from Polokwane. They produce about 100 tonnes of maize every season.

For decades Progress Milling has partnered with small-scale farmers such as Chuene and Lekoloane, ensuring that they could work the land and have a place to store their grain. Every month they would pay about R100 for the company to mill their maize. In the cycle of life here, Progress was the cog.

After the company, a major supplier of maize products to the rest of the continent, filed for business rescue Chuene says she went there “to get my monthly bag and was told that we couldn’t get it. We were going to go hungry.”

Lekoloane says Progress could give the farmers only 10% of their grain. The farmers have 11‑million tonnes stored there, worth about R54-million. But that means little to Chuene, who has 10 mouths to feed.

“Imagine, I have to pay R600 for a bag of maize to feed this house every month instead of the R100 to grind the maize,” she says. “My pension now is the only thing we live on.”

Chuene’s struggle is duplicated throughout the village; families are being forced to go hungry.

A month after the mill’s announcement, the Limpopo agriculture department said it had run out of money to help farmers in the drought-stricken province.

Lekoloane, who is among those negotiating with Progress Milling, says there was little communication with the farmers for the three months after the company said it was broke.

“We got back to work because it was reaping season,” he says. “But then the problem was what do we do with the grain. Progress Milling has serious problems and there was no other place we had such a relationship with.”

Many of the farmers kept their maize in garages or stuffy rooms. By June the maize was rotting. Worth nothing, it could only be fed to cattle — and families could still not get their grain from the mill.

The older farmers in the group are apparently frustrated and willing to accept any deal.

“The worst thing about this is the fact that we work with a lot of elderly people who didn’t understand all this jargon and were simply scared they would lose all that food to Progress,” said Lekoloane.

Chuene, sitting in the shade of her home and wearing her farmer’s hat, says she has to use her last money to put food on the table and has imposed strict rationing. “I fed the grain to my chickens. It wasn’t something we could eat, and we couldn’t take the little we had back to the mill and never get it back. That is the life we have to live.”

Hope appeared on the horizon when three companies — Louis Dreyfus Commodities, DH Brothers Industries (trading as Willowton) and Il Molino, which trade in a range of products, including wheat and maize — said they wanted to buy Progress Milling.

In its business plan, the consortium explains how the farmers rely on the company to provide food security for their families: “The farmers are small-scale emerging who will become vulnerable even if their claim is compromised in the smallest degree.” The buyout, they said, would guarantee the retention of 700 jobs and ensure the farmers got their grain back.

Lekoloane lights up when he speaks about the consortium. “We first heard of the consortium after there had been no word from the business rescue plan practitioners.”

But their hopes faded as the back-and-forth discussions among creditors, the consortium and the limping Progress Milling started.

Numerous meetings were held, tempers ran high and court action was threatened and filed. The tug-of-war ground on.

Lekoloane diligently attends meetings for updates and to report back to the farmers. “It’s hard. You must understand that this is their way of life. They rely on this [the mill] and it’s painful to watch.”

The business rescue practitioner handling the Progress Milling case had not commented by the time of going to print. But, six months after the milling company dropped its bombshell, there is some good news — the consortium will now buy Progress Milling.

On Thursday Mohamed Essack, director of Il Molino, told the Mail & Guardian that the consortium is finalising its business plan and has been in talks with the agriculture department and the mayor of Polokwane. But its main focus is on ensuring that people don’t starve.

“Once we verify the tonnages of maize owed to them, we can start giving it back to them. The smaller families who rely on this food so they don’t starve are of great importance and we would like to continue the relationship with the farmers.”

With ploughing season around the corner, Chuene is hoping once again.