Makhosi Khoza: Being led by a president who harasses women is intolerable 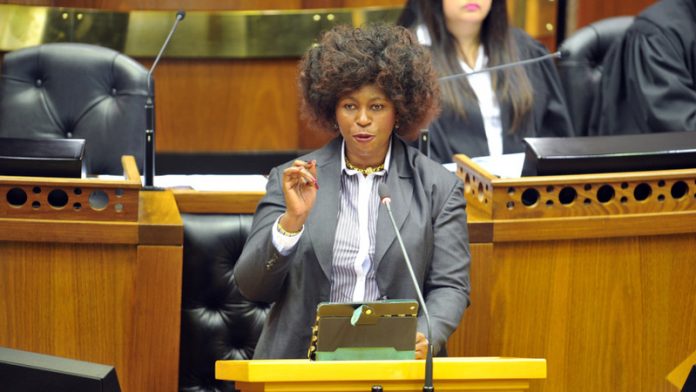 ANC MP Makhosi Khoza has reiterated her demand that President Jacob Zuma must step down. Khoza said that as a feminist in South Africa, she cannot tolerate being led by a man who has been accused of harassing women.

Khoza was speaking at an event hosted by Save South Africa and the Ahmed Kathrada Foundation for Nelson Mandela Day at Rhema Church Randburg. The conference was held to develop resolutions for a plan of action to mobilise support for a vote against Zuma in the motion of no confidence on August 8.

The ANC MP said that although she has been a member of the party since she was 12, Zuma’s leadership contradicts the ANC’s own constitution as well as the Constitution of South Africa. As a feminist, she said, his leadership is “intolerable”.

“I am here to defend the ANC mission and not a dishonourable and disgraceful leader. I am here, because as an African feminist … I find a patriarchal system oppressive. I also find being led by a man who harasses women extremely intolerable.”

Former ANC MP Vytjie Mentor has accused Zuma of harassing her on two occasions. Zuma was also accused of raping a woman known as “Khwezi”. Fezekile Ntsukela Kuzwayo was forced into exile after a court found Zuma was not guilty of rape. After Kuzwayo died in October 2016, her death reignited headlines about Zuma’s rape trial.

Khoza has received threats on her life, which were reported to have come from a cellphone registered to a member of Black First Land First, but BLF has denied it threatened Khoza. On Friday, Khoza posted screenshots of a text conversation where she was threatened. She was told she has 21 days to live.

On Tuesday, as she stood in front of delegates, civil society representatives and MPs at the Save South Africa conference, Khoza said: “In case I do not make it on the 8 August 2017, Mr President you know as the president you are taunting the South African nation. Please, Mr President, step down.