Unless you’ve been hiding in a nuclear bunker since Donald Trump’s presidency began, you’ll know that two of this century’s supreme fighters are going head-to-head this weekend. And all signs point to it being a complete farce. The grand comedic irony is that one of the biggest sporting events of a generation is barely worthy of the phrase.

In one corner: one of the greatest boxers of all time, Floyd “Money” Mayweather, the man with an unheard-of, unprecedented, undisputed 49-0-0 record.

His opponent: mixed martial arts (MMA) darling Conor “The Notorious” McGregor, a history-making fighter, but one with absolutely no professional boxing experience.

Only the brave and the mad suggest the Irishman has anything more than a snowball’s chance in hell. Though absurdly gifted in his own right, McGregor is stepping into Mayweather’s house. It’s a house the specialist pugilist has dominated for two decades, taking on the best the world has to offer and producing the same victorious result every single time.

Arguably the best defensive fighter to have ever laced up his gloves, Mayweather has probably only been hit flush about five to seven times in his entire career. Yet a brash MMA fighter in his first real bout is expected to prevent that glorious 50th win?

The premise of the fight is the genesis of what has become the greatest circus in the history of either sport. The on-paper mismatch is just the start of the joke, however.

À la Cirque du Soleil, the Mayweather-McGregor festival has hit the road for a bona fide world tour. Tens of thousands in Toronto, Los Angeles, London and New York got to witness the spectacle first hand as the two were paraded in front of live hordes. The crowds roared with delight as banter went back and forth and faux-intimidating face-offs ensued.

You would be hard-pressed to find two athletes better versed in the crass art of showmanship, and their skills were in full effect.

Mayweather brought a backpack along with him to one stop on the tour from which he produced a crisp cheque — a $100‑million payday he claims has been burning a hole in his pocket since his mega-fight against Manny Pacquiao in 2015. McGregor, meanwhile, rocked up with his now-infamous pinstripe suit — look closely and you’ll see the stripes are made up of the words “fuck you”. A few days later, he wore a polar bear fur coat. 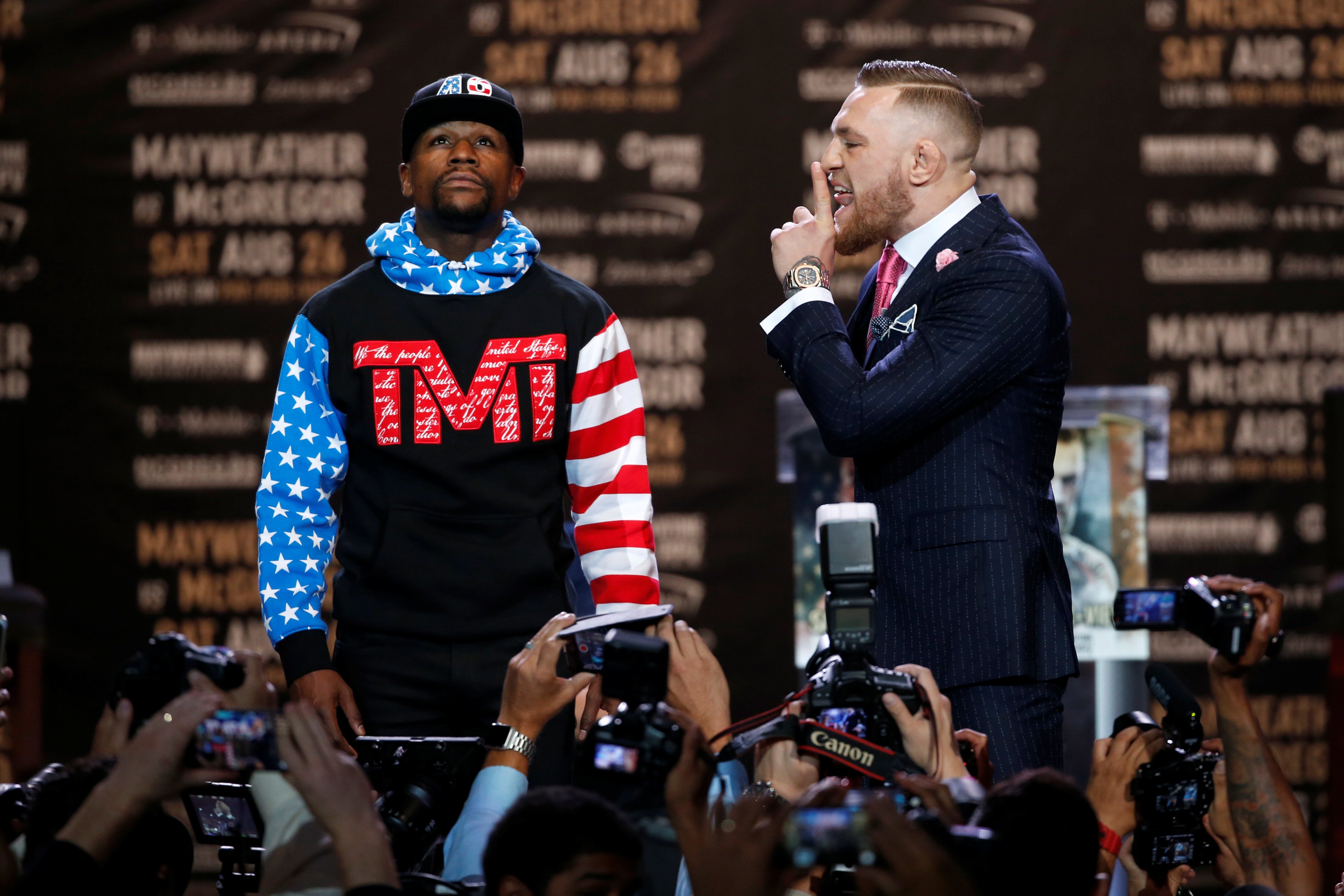 The fact that these glorified press conferences were sold out explains why this fight was set up in the first place. These entertainers were born to compete — in and out of the ring. Actual competition arising from the clash is a byproduct that likely does not concern the promoters too much. The concept of the fight is enough to capture the mind — logic be damned. And with captured minds come captured wallets.

Whether the fight itself turns out to be an absolute humdinger, travesty or, as is most likely to be the case, an episode of defensive boxing 101, it will be the dollar that has its hand raised at the end of the fight.

The record-breaking revenue of Money’s match against Pacquiao came in at about $600‑million, with Mayweather himself earning north of $200-million — proving he has the most apt nickname in humanity’s recorded history.

“Experts” suggest the upcoming boxing versus MMA extravaganza could net anywhere between $500‑million and a ridiculous $1‑billion. Whatever the degree of obscenity, once the pay-per-view, betting, merchandise and ticket incomes are all added up, it will certainly give the Mayweather-PacMan “Fight of the Century” a run for its money (pun intended).

Contributing to this pornographic whirlpool of cash and the carnival atmosphere are backers willing to walk the walk. Prominent businesspeople the Maloof brothers, for instance, have put $880 000 on Mayweather coming out victorious. The returns? Roughly $160 000 profit.

The lopsided odds have done little to deter those rooting for The Notorious, however. If anything, it’s galvanised their fervour. Reports this week suggest that about 95% of bets have been placed on the underdog, leaving bookies nervously praying for a deity not to intervene and cause an upset. Former Ultimate Fighting Championship (UFC) fighter Brendan Schaub has even put his penis on the line, promising dick pics to his followers should McGregor get knocked out.

The promise of an Irish pot of gold at the end of the rainbow has clearly gone to the heads of MMA fans, but is their faith in their superstar utterly unjustified? Some might dare to argue that it’s not. Unrealistic, yes. But impossible?

Put simply, if anyone from their world can do it, it’s McGregor. Despite looking like a hipster without irony, he has proved to be one of the most ruthless and intelligent competitors any form of combat sport has had to offer recently. As recently as 2013 he reportedly collected a welfare cheque for $235 — now he reigns supreme as the first person in UFC history to hold two belts from two different weight classes. Familiar criticism greeted his step-up to lightweight, but he silenced the doubters with a second-round technical knockout against the larger Eddie Alvarez.

Preceding that fight, he proved he has the quality to adapt when the chips are down and the situation calls for guts in pursuit of glory. His epic consecutive fights against Nate Diaz prove that the wild, colourful cats tattooed on his body are not aesthetically meaningless. After tapping out in the first fight, McGregor used the failure to become a better, more complete fighter. He fine-tuned his style, harnessing every error he made as a lesson and turning them into strengths. His dogged, stoic approach to competition is the reason he left the second fight with his hand raised in victory and the world at his feet.

Further fuel was added to the flames of hope in the build-up to the “Money Fight” with images of McGregor actually making an impact in a boxing ring. UFC president Dana White released sparring footage of his prime talent and of him knocking down former world welterweight champion Paulie Malignaggi.

So, does the southpaw Irish have a chance against this generation’s greatest counterpuncher? Maybe, maybe not, but ultimately the question is moot. This fight goes beyond the winner and the loser, even beyond the massive sums that are being tossed around.

The duel is a microcosm of the trajectories of both MMA and boxing, and an indication of what we can come to expect in the near future. It is the natural direction to take for both the ambitious and the disillusioned. It is the meeting point of two rivers.

As the undisputed crown jewel of combat sport for decades, in recent times boxing’s reign perhaps hasn’t been as dominant as its purists would wish. The anachronistic “Fight of the Century” notwithstanding, gone are the days in which the sport could truly capture the world’s attention, when the build-up to fights like Mike Tyson vs Lennox Lewis was broadcast on daily news shows across the globe.

MMA, meanwhile, has gone from strength to strength in the past 20 years. “Cage fighting” was initially laughed off as a professional sport, dismissed as brutal carnage without any structure, a gruesome bloodsport. And rightly so — many early organisations didn’t have any weight classes and offered very few rules to protect their fighters. Fast forward a few decades and MMA has become a respected global phenomenon.

The McGregor vs Mayweather fight is perhaps the two sports meeting perfectly in the middle — and milking the chance encounter for every dime they can. Cents make sense and everyone wants a slice of the pie, even if it means going against what can be considered a realistic challenge.

Take the UFC’s other darling, Jon Jones, as an example. At the end of his memorable July victory over Daniel Cormier, he called out Brock “The Beast” Lesnar, a man almost 30kg heavier, to be his next opponent. Why would he seek out a fight in which he’s clearly the underdog?

“So, if I’m going to sacrifice being the smaller guy, I think stylistically Brock would be a fight that makes way more sense, and the payday would be tremendous,” he said.

“What it would do for our sport would be tremendous. Much bigger impact. So, for many reasons, a Brock Lesnar fight just makes much more sense to me.” 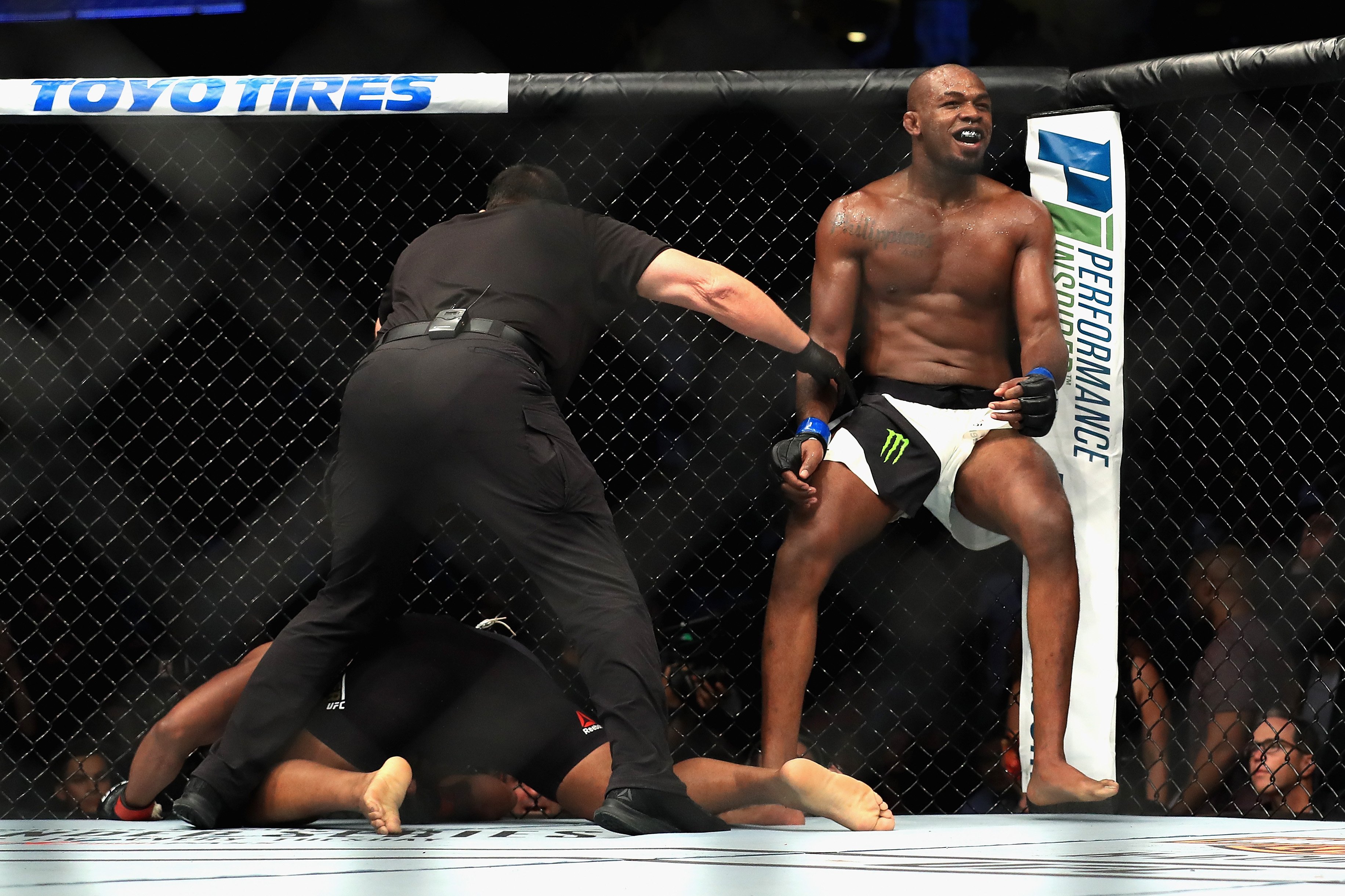 Even British golden boy and Olympic gold medal holder Anthony Joshua, a boxer, has said he would entertain the idea of crossing sports and trying his hand at MMA — although he admitted he would prefer that there was no submission involved: “I’d probably get beaten. The only thing that they can’t do is submissions, but they can kick, elbow, bite — whatever they want. Just no submissions.”

Is this the future? Paradoxically, a large part of the allure in putting together a Mayweather-McGregor battle was its implausibility. But they made it happen. What will become of both boxing and MMA when the appetite of the hordes is only sated by the bizarre, improbable and illogical?

Fortunately, we don’t have to answer that question right now. We can sit back and enjoy the show. Take in all the banter, bright lights and frivolous action.

The best thing about the circus that, when it’s over, once we’ve gotten our fill of absurdity, the troop will pack up its tent and leave.

Trumpian troll cons it to the big time

Tap, tap, Khabib is on the attack

Slice of life: The fight in me