The University of the Witwatersrand has given its workers an ultimatum to accept the salary increase it has put on the table or forego an annual increase next year.

This comes after a deadlock in the five-month salary negotiations between the university and four unions.

At least one union has already referred a dispute to the Commission for Conciliation, Mediation and Arbitration (CCMA) — a necessary precursor to strike action — and others are about to do so. The unions are looking at embarking on a strike in January.

The university is offering academic staff a 6.8% raise, and professional and administrative staff between 6% to 7%, based on their remuneration levels. 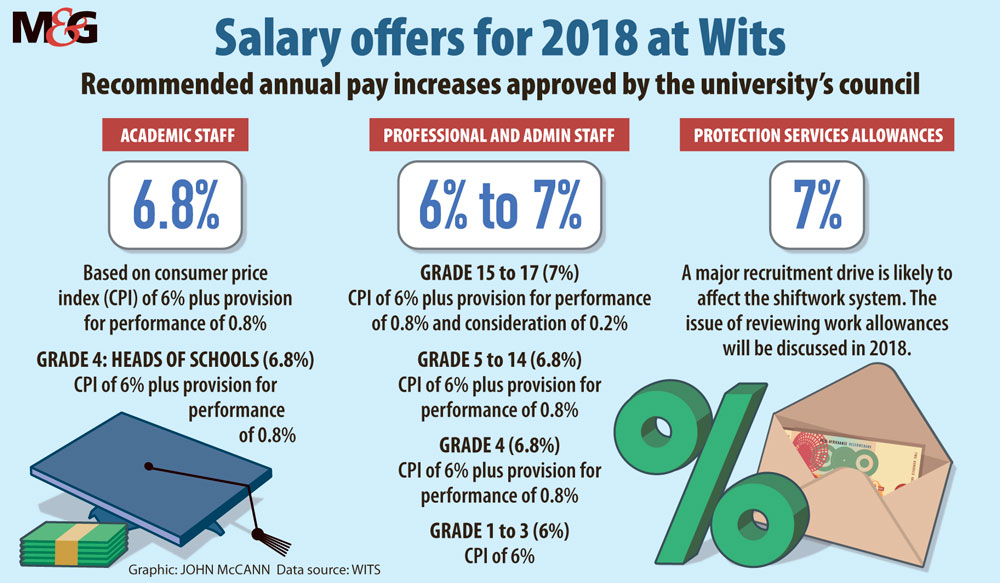 But in a joint meeting last Friday, the unions — the National Education, Health and Allied Workers’ Union (Nehawu), the Administrative, Library and Technical Staff Association (Altsa), the Academic Staff Association of Wits University (Asawu) and the National Union of Metalworkers of South Africa (Numsa) — received a mandate from workers to approach the CCMA.

Wits spokesperson Shirona Patel said the university was aware that some unions had approached the CCMA, and that the institution welcomed facilitation as part of the agreed dispute resolution mechanisms.

“Concerning strike action, we wish to emphasise that this is a constitutional and statutory right of all employees, which the university respects. However, there are legal requirements which should be met for any strike action to be protected. It is our belief that our union leadership will comply with these requirements and the right of those conscientious objectors to strike action,” said Patel.

The Mail & Guardian has seen an email sent by the university’s senior executive team to staff on December 4 in which it indicated that it had reached a deadlock with the unions after meeting 13 times. The team decided to make individual agreements with employees “through a letter to each staff member through which they will indicate their decision”.

The university added that it was going through difficult times because of, among other things, the uncertainty about tuition income for 2018 because of government “inaction” on the Heher report on fee-free education.

President Jacob Zuma released the Heher report last month. It found that there is no capacity for the state to provide free tertiary education to all students.

Zuma said he would make a pronouncement on the report only after the interministerial committee on higher education funding and the presidential fiscal committee, which are both studying it, have concluded their work.

“Given these challenges, the SET [senior executive team] believes that the proposed offer is the best that can be made under the current circumstances. It maintains our ability to compete favourably with, and to be among, the best paying in the sector. It speaks to the principles of fairness and affordability and will not compromise the university’s financial sustainability,” reads the email.

The acting branch secretary of Nehawu at Wits, Tumisho Madihlaba, told the M&G this week that the union had already referred a dispute to the CCMA. The union had asked for an 8% increase, because the 6% its members had been receiving for the past three years meant they were “finding it difficult to cope with their daily demands”.

Nehawu had also demanded that its lowest-paid workers be moved to the midpoint of their salary scale, so that those who earn R94 000 a year move up to about R117 000.

“They rejected that and said they cannot afford it. This is a serious dispute because they are saying they cannot afford it, but in the past year this management was able to raise about R40‑million in a short period in order to get private security during #FeesMustFall,” he said.

“It cannot be business as usual when the university management has refused to listen to workers.”

The vice-president of Altsa, Taariq Surtee, said the main concern for the union was that workers on the lowest scale were underpaid. The proposed increase would take them up to a level where it becomes compulsory for them to join a medical aid scheme, but this would mean they would barely have any money to take home.

He said when the university says fees must go up by 8%, it acknowledges that the cost of living has gone up by 8% and yet expects workers to survive on a 6% increase.

“If workers get 6%, it means we are subsidising the university to function, basically meaning we are paying the university to work here,” said Surtee. He said Altsa had not yet approached the CCMA and was waiting to meet members to map the way forward following the joint union meeting.

Asawu president Anthony Stacey said the union had pushed for reinstating the monetary element of long-service awards and had rejected increases based on performance. But the union’s concerns were rejected by the university, he said.

The university’s decision to implement salary increases by individual agreements has also angered union leaders, who see it as intimidation by the university, divisive and undermining the role of the unions.

“There was a strong sentiment by members of the unions that this is unfair and prejudicial, and the process is flawed,” said Stacey.

Workers had until Wednesday to accept or reject the offers made to them. The university started sending the letters to staff on December 6. In one of the letters, the university offers a 6.8% salary increase and gives electronic options of accepting or declining the offer.

If the “accept offer” is clicked on, “the offer is binding between you and the university for the duration of the offer period”, which is a year.

If the “reject offer” is selected, it says “your annual remuneration from 1 January 2018 shall remain as at 31 December 2017 for the duration of the offer period, unless the contrary is agreed to by the university”.

As for workers who failed to meet the Wednesday deadline for responding to the proposed increase, the university assumed that they had rejected the offer. But the email added that those workers who wanted to accept the offer at a later stage could approach the human resources department to make the necessary arrangements.