Cut the past out of your hair. It’s a philosophy I have lived by for as long as I can remember. You see, in some cultures, your hair is the place where your experience lives.

Hair is not just hair. It’s politics. It’s time in animation. It’s where your stories have roots and where you grow your narrative. Your hair is weathered by the elements of sun and wind and soil but it is also weathered by the condition of your soul. And when the soul asks the important questions in my life, my hair always answers: Cut the past out of your hair. And start again.

I thought about this on my way to Yogi’s Barber Shop. Traffic is heavy but quiet. I can’t remember ever getting a haircut at 9am in the morning. I take a deep breath and pay for parking, each coin an exhale. I make my way to Buitengracht Street and brace myself for a cut at a Cape Town landmark. 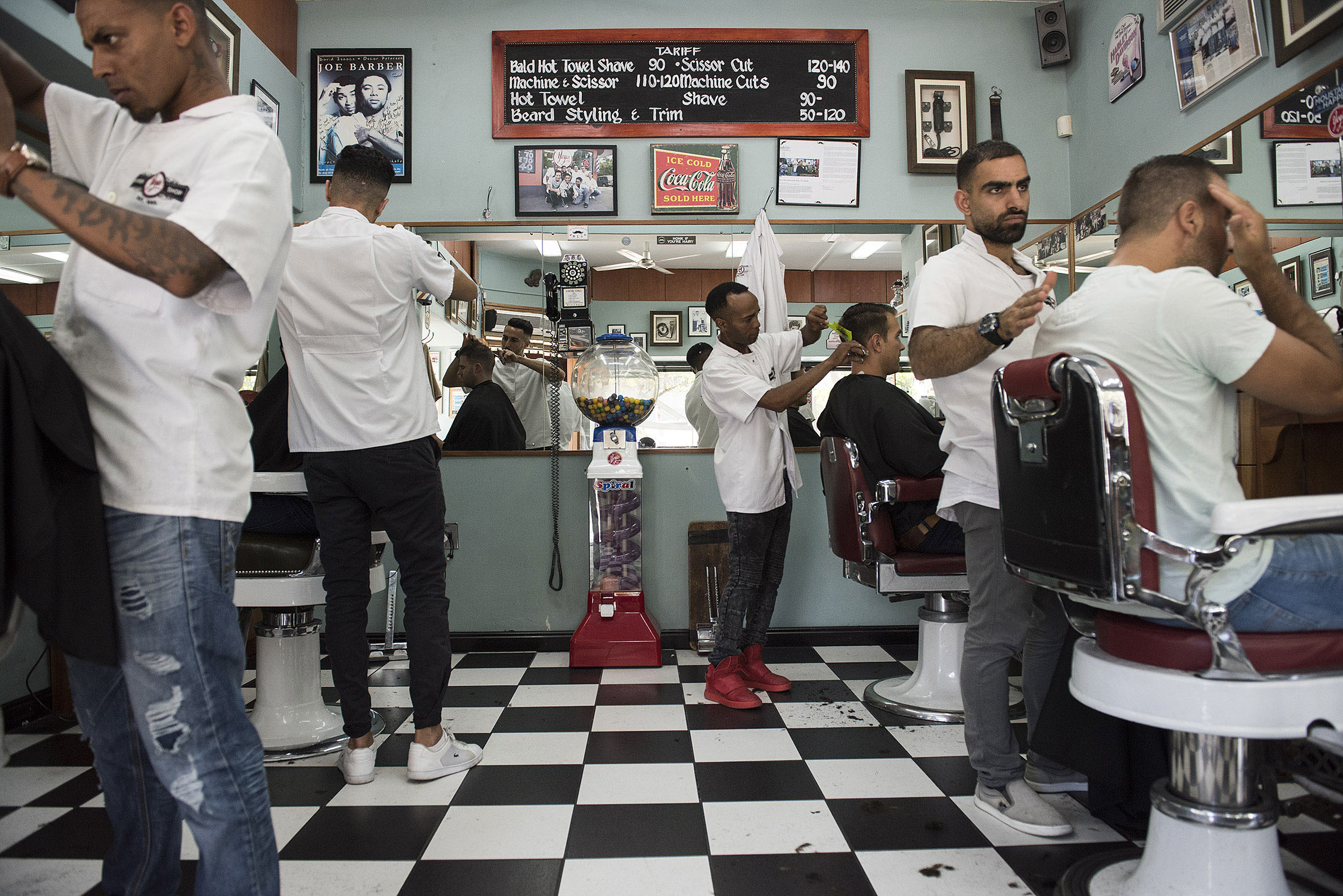 [Inside Yogi’s Barbershop, a Cape Town landmark and a legacy of the Govan family (David Harrison)]

A group of guys are hanging about outside killing their cigarettes on the tarmac stained with the shadows of the low-hanging clouds. I look up before I enter. They tease us, those clouds. No rain again today, I suppose.

When he was a boy, Yogesh “Yogi” Govan would get strict instructions from his barber dad. “Sit still there and keep quiet,” the youth was told. “And then, from the smoke and ashes, the stories would rise,” says Yogi.

It was a Saturday morning, decades ago, when an old gentleman walked in for a haircut. Because the barber maintained a traditional first-come, first-serve system — something that Yogi still upholds to this day — the gentleman waited a long time to have his edges trimmed. When he was done, he took his fresh cut with him up the hill toward Bo Kaap. Minutes later, that same fresh cut dragged its way back down the hill. This time, heavy with the burden of luggage.

“He walked in here with a haversack and a tog bag and I remember he had a letter,” says Yogi. Eyes bright with the memory of the past, its exposure matched only by the white shirt he’s wearing under his red sweater. Yogi was too far away from the older men to hear an exact exchange of words. But on that smoke that travels so well in small spaces he heard the makings of a story. He made out that the man wanted his dad to read the letter … and respond.

A new patron walks in. Yogi excuses himself. I take a moment to capture the scene around me. I imagine that old man from days gone by in the corner chair. My eyes capture a deep nostalgia with each blink. A gumball machine sits undisturbed underneath a phone that has long since had its last ring. Rusty clippers and other barbers’ tools from generations past crowd the walls in matt-lined frames.

A picture of Harry, Yogi’s dad, hangs above me, his eyes casually gazing over all six barbers’ chairs and the artisans who work them. When his shift ends, the portraits of Yogi’s grandfather and great-grandfather take over. 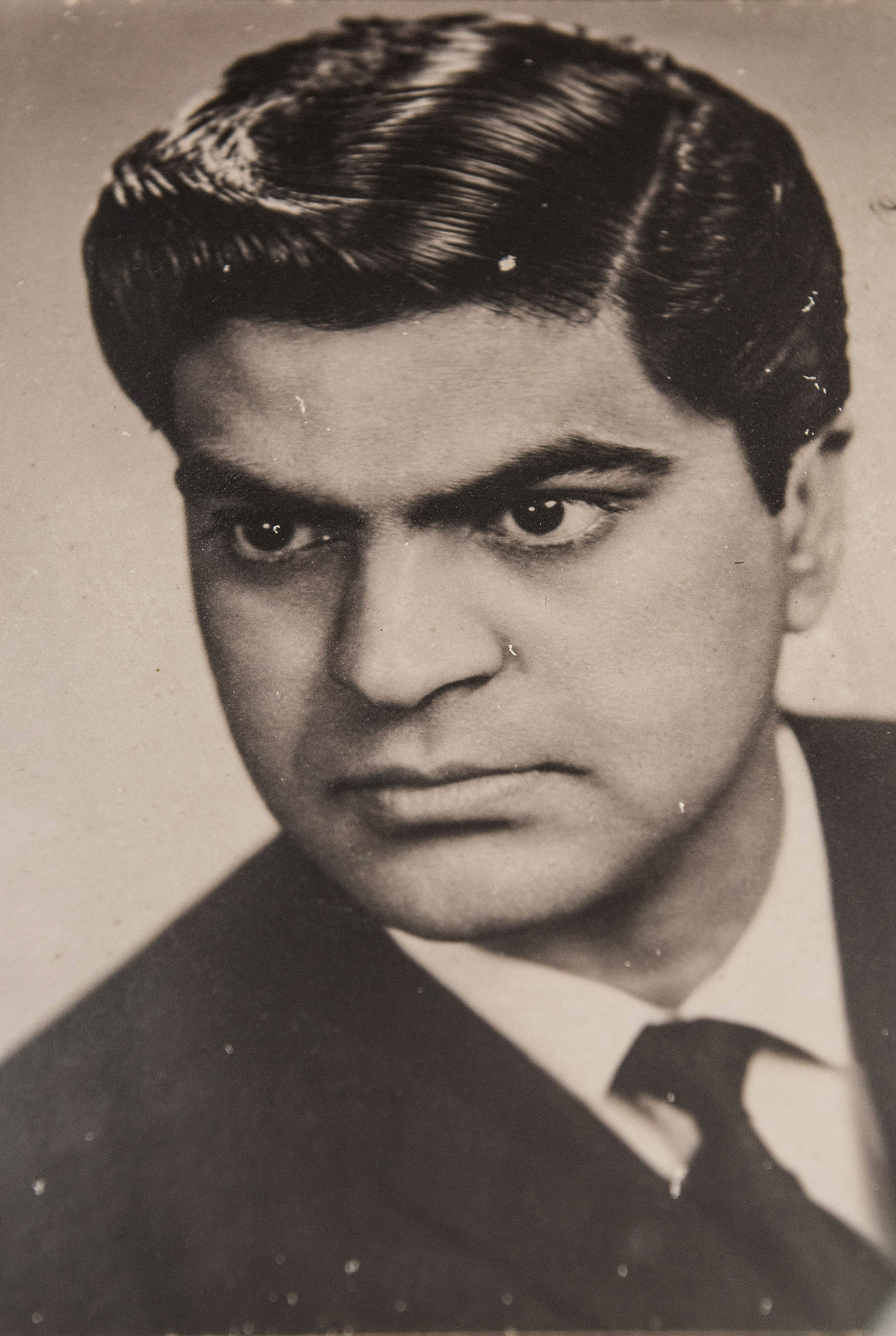 A history of hair, right here on the corner of a city crushing the old heritage sites in Bo Kaap across the road with tall high-rises made of gentrification and foreign wealth.

But the past will not be erased from Yogi, this fourth-generation barber whose trade runs in his veins.

That Saturday years ago, he sat next to his dad on the car ride home and with eyes no doubt just as bright as the ones talking to me now he asked: “Dad, that old man that came in there, what was the letter about?”

“Okay son, let me tell you how this works. This guy came in for a haircut and then he returned with bags. You saw him, right?” Harry checks to see that he still has his son’s attention. He does.

“When he got home, his wife told him to pack his bags and go. The old man tried to explain to her that he was at the barbershop cutting his hair. But the problem was that he was having an affair with a hairdresser so the wife thought he was at her house.”

Yogi lets out a warm chuckle. It’s clear he is reliving the story like an entertained child. The letter held the seven digits of the gentleman’s telephone number. The responsibility fell on Harry to clear up the mess.

Out of the many roles a barber plays — therapist, father, brother, town gossip, soothsayer — sometimes he also has to be a marriage counsellor. Harry was also a matchmaker. He hooked this man and his wife up years ago, and even did her hair in a fit-looking up style for their wedding day. There was no getting around it — she trusted him that day and she trusted him still. The man went home to his wife.

I ready myself for my own haircut. There’s a fuzzy reel running in my mind about all the times I have visited barbershops as a woman. Some men looked at me like they didn’t know what to do with me. Hair is surely hair, right? Other barbers turned me away because my femininity was an offence to their sacred masculine space. 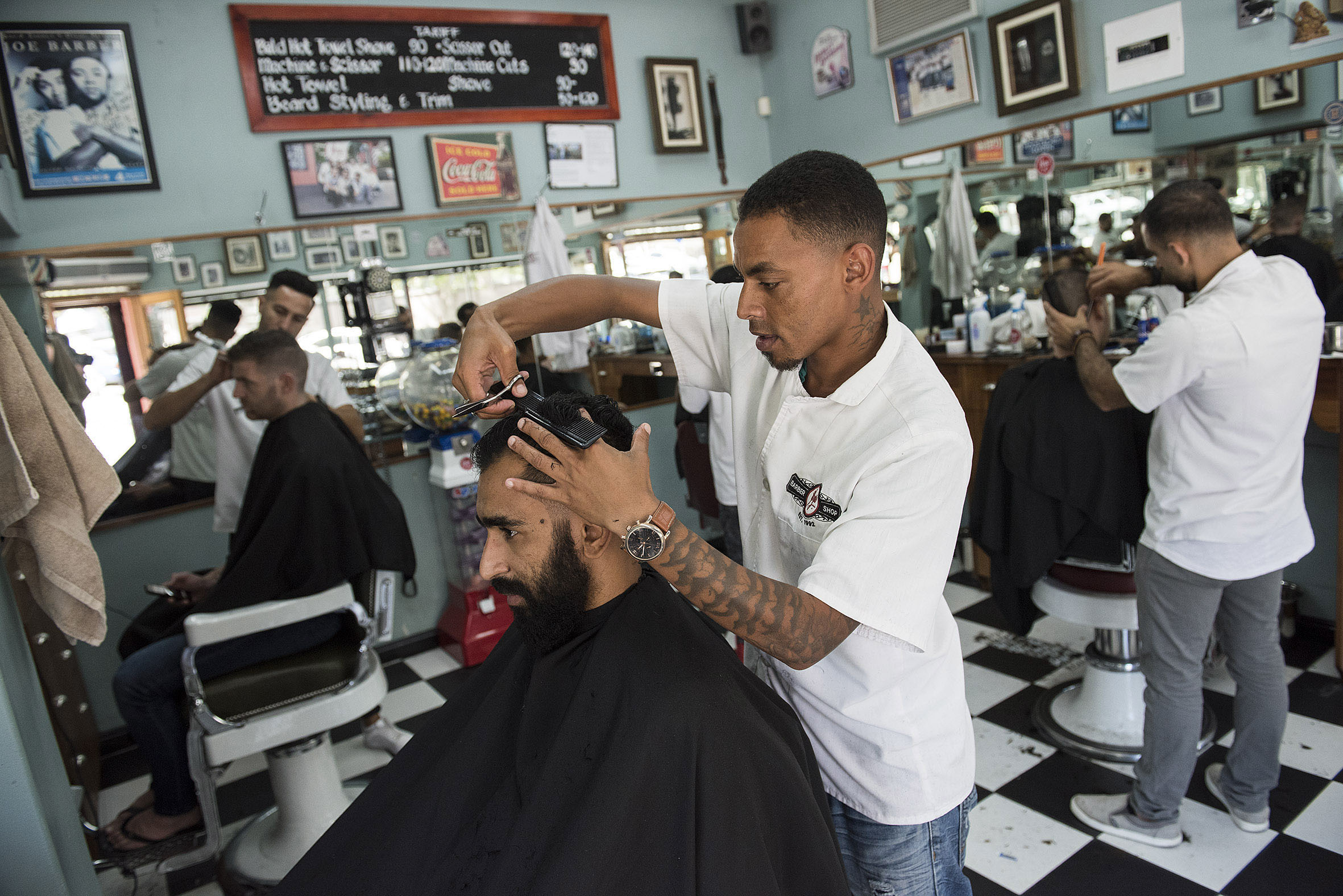 These thoughts swim in my tummy as I take my seat. I exercise a mental shrug. It doesn’t matter how much of a feminist you are, sometimes the patriarchy still gets to you. But at Yogi’s, sexism rises like the embers from a burning bra and disappears into the atmosphere. This is no place for it.

“Dis ’n yaat* nommer!” Abbaas, the barber chopping my own locks, has his snip stopped by a colleague who wants to talk about the song playing. Soon after, another nommer plays. This time it’s Beyoncé’s Love on Top.

“En nou, Abbaas? Is jy nie lus nie?” Now it’s a colleague at the chair opposite us. He mimics a dance. It’s clear that Abbaas probably knows how to skud lekker on the checked barbershop floor. He doesn’t this time though. But he does do his best to hit Bey’s highest notes.

I’m about done pretending not to stare at my fresh cut in the mirror when I witness two women walk in. They don’t seem as intimidated as I was. They must be regulars.

“Women come here all the time,” I remember Yogi saying earlier. They’re so confident, my insecurity stirs again and dampens my poise a bit, like a spritz from a spray bottle.

Yogi told me earlier: “Young women, old women. I have old women clients from Bo Kaap who used to come get their hair done by my dad and they still come.”

I am mid-moan about discrimination in the sexist hairdressing industry. The way women pay more. Capital markets. Yogi stops me with an empathising and affirmative nod. “You come here, you pay only up to R140.

“In Bo Kaap, you will see the aunties. They come here, keep their hair short and then pull the doekie over.”

I smile. I have family members who do this. If only they had the pleasure of strolling down to Yogi’s for a quick number four.

Moving forward back in time

“You look 24.” I am not offended when Yogi says that to me. Instead, I feel my predisposed insecurity about walking into a barbershop hit a 180. My doubts are silenced. I walked in 33.

I am snapped out of the haze by the clicking of Yogi’s camera. The pic makes its way to Yogi’s Barbershop Instagram account: “Ladies rock at the barbershop.”

* Yaat is a colloquial term for music with a recognisable beat. Basically, it’s just kwaai songs and if you know it, you know it. You know?

‘Is fokol is nex’: The South Western side of life

On Bop and the legacy of nostalgia