Minister in the Presidency, Dr Nkosazana Dlamini-Zuma, has distanced herself from a tweet on her official Twitter account that accused Democratic Alliance (DA) members of bribing individuals to cause chaos in the North West province.

The tweet, which has since been removed, cited “anonymous sources” for the accusation, and linked users to a YouTube news report published by Africa News Network 7.

“Hello south Africans. What is actually happening in our Province? See this youtube.com/watch?v=Gxafjp… News from anonymous community members that @Our_DA members in the province are bribing select community members to cause chaos in the Province? Good day to you,” the tweet read. 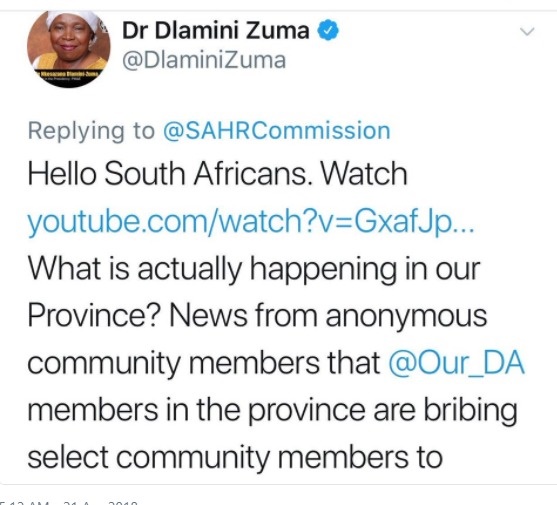 On Saturday morning however, the tweet was removed. Dlamini-Zuma later issued an apology, saying the tweet did not represent her views, claiming her account had been hacked.

The allegations come at a time when violent protestshave rocked the town of Mahikeng this week.

In a scathing response, DA leader Mmusi Maimane, who was visiting Mahikeng on Saturday, said her tweet was “sheer nonsense.”

“It shows that she is not fit for leadership. It shows the ANC doesn’t care about the people. People are raising legitimate concerns here.

“For Nkosazana Dlamini-Zuma to tweet about such issues, A, [it shows] how distant the ANC is from the people and B, how much they don’t really care.

“No-one has been paid. People want to fabricate rubbish like that shows that these people no longer know what is happening in South Africa, let alone care for the people of South Africa.”

In her apology, Dlamini-Zuma issued an apology to the DA. She is currently at the funeral service of ANC struggle stalwart Zola Skweyiya. – News24

I will take responsibility because it is my Twitter account and I’m a public figure but rest assured that those are NOT my views. Again I apologize.