News24 has confirmed the document shared by at least two DA MPs on social media is a forgery.

The DA members include deputy chief whip Mike Waters, who is also a deputy federal chairperson of the party, and National Council of Provinces MP Bronwynn Engelbrecht.

The social media post in question shows a picture of De Lille with the headline “Patricia de Lille exposed”, before listing alleged breaches made by De Lille relating to MiCity bus tenders. 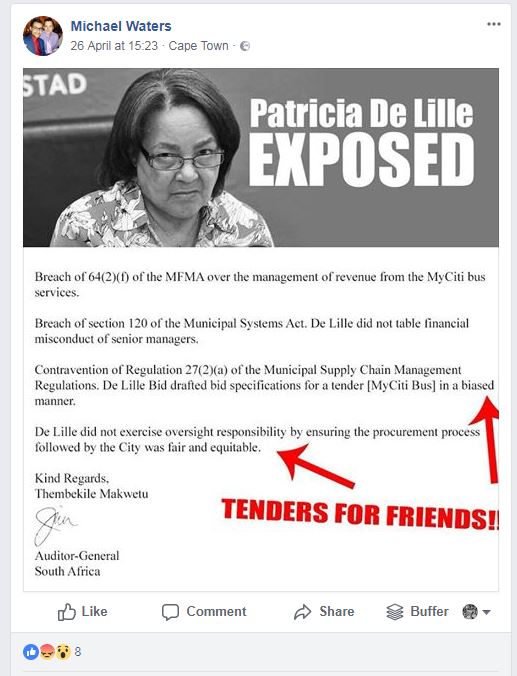 It lists three alleged contraventions of various municipal laws, including the municipal systems act, and draws the conclusion that “De Lille did not exercise her responsibility” in the procurement process of MyCiti buses.

It is then purportedly signed by Auditor General of South Africa (AGSA) Thembekile “Kimi” Makwetu at the end of the page.

AGSA spokesperson Africa Boso confirmed with News24 on Friday that Makwetu did not give his signature for the purported document, and that their municipal findings will only be released later this month.

“The Auditor-General of South did not sign or know the origins of the document you are enquiring about,” Boso told News24 via email.

“The AGSA will deal with all matters relating to municipal audits when it tables/releases its general report on the audit results of all the country’s municipalities on 23 May.”

AG does ‘not make findings against individuals’

Makwetu himself confirmed to News24 that, as national head, he does not personally sign municipal or provincial documents in the way that is shown in the purported document.

His office also does not make findings against specific individuals, as is also suggested in the document.

The news comes in a week where De Lille’s future hangs in the balance, after almost 70% of DA councillors in the City of Cape Town voted to oust her as mayor in a motion of no confidence two weeks ago.

From Water’s and Engelbrecht’s posts in late April, the document was subsequently re-posted or shared by at least another four members, two of whom are councillors in the Cape Town and Ekurhuleni municipalities respectively.

Waters told News24 on Monday that he had no idea the document was a fake, as he had simply “reposted” it from social media.

“No of course I didn’t know, if that’s the case. I got it from Twitter,” Waters said.

He agreed that it was problematic, and the issue warranted further investigation.

“Of course [it’s worrying], someone is forging the AG’s signature, which is obviously in itself fraud.”

Document ‘not used’ in DA’s disciplinary against De Lille

Engelbrecht told News24 on Monday that she needed to check her Facebook feed again, as she cannot remember the specific details of the post in question.

DA spokesperson Natasha Mazzone responded to News24’s request for comment on Monday, including if the document formed part of the DA’s charges against De Lille.

“This document is not an official communication of the DA and has not been shared on any official DA platforms, nor has it formed part of the ongoing disciplinary matter between the DA and the City of Cape Town mayor, Patricia de Lille.

“Any DA leader or member who has shared this has simply fallen prey to fake news on social media platforms which is quite common.”

The party did not answer a question on what it made of the fact that someone had forged an AG document against their embattled mayor in the midst of a fraught battle between the two parties.

News of the City of Cape Town’s proposed audit downgrade from clean to unqualified first broke in January through leaks to the media.

The full report however is still the property of the Cape Town city council, with Makwetu’s office only due to release all municipal reports later in May.

The DA also lists similar Auditor General findings against De Lille on their official website under their FAQ section on the De Lille matter.

De Lille also cited the post in her  submissions made to the Democratic Alliance’s Federal Executive on Wednesday on why she should not be removed, which she subsequently released to the public.

She however did not make any claims that the document could be fake, only citing it as evidence of Waters’ alleged bias against her.

The DA’s federal executive is currently engaged with the  pending recall of De Lille, having postponed a decision over the weekend pending legal advice.

The party will likely make an announcement on Tuesday. —  News 24

In a previous version of this article, Mike Water’s Facebook post was embedded in the piece. It was subsequently deleted on Monday afternoon without explanation. We have since included a screenshot of the post.