A lens on a portfolio review

‘Whoa.” It is an exhalation collectively released by photographers Reatile Moalusi, Kgomotso Neto Tleane as they enter the New Museum on New York’s famed Bowery neighbourhood.

The lightless corridor is furnished with two screens suspended from the ceiling. A film is playing on the first screen — but the language is not recognisable, the characters cannot readily be seen and the subtitles cannot be easily read because the entire image is inverted.

“This is such an interesting way to present work. I’m already thinking about my next series,” Moalusi whispers. Tleane is quietly pacing the corridor snapping this scene on his 35mm camera. They’re both restless — a likely come-down after the past few days of high-intensity workshopping of their own artwork by a roomful of world-renowned strangers.

“You’re standing behind the exhibit, ma’am, gentlemen. There are seats on the other side,” whispers a security guard.

“I still think it’s an interesting way to present work,” says Moalusi as he walks to the other side of the screen, half-sheepish, half-amused.

There are five floors to the New Museum and Tleane and Moalusi have roughly 90 minutes before they have to dash off to The New York Times offices.

They are in New York City for the sixth annual New York Portfolio Review. It’s a critique of photography, video and multimedia. Sponsored by The New York Times Lens blog, the City University of New York’s Graduate School of Journalism and United Photo Industries, the review is held under the banner that “only the quality of your work should matter”.

For a weekend in April this year, about 40 esteemed reviewers such as photojournalists David Gonzalez, Elizabeth Avedon and James Estrin gathered with 160 applicants chosen from a pool of roughly 3 000. Qualifying is no small feat.

Applying to the review was the first hurdle for Tleane and Moalusi, they both confess. “Being self-taught, all I know is how to shoot,” Tleane says. “I usually don’t apply for these things because what are the odds?” It was his friend and fellow photographer, Andile Buka, who presented his work at last year’s portfolio review, who pushed him to apply. “Dude, you have to do it,” Tleane recalls him saying. 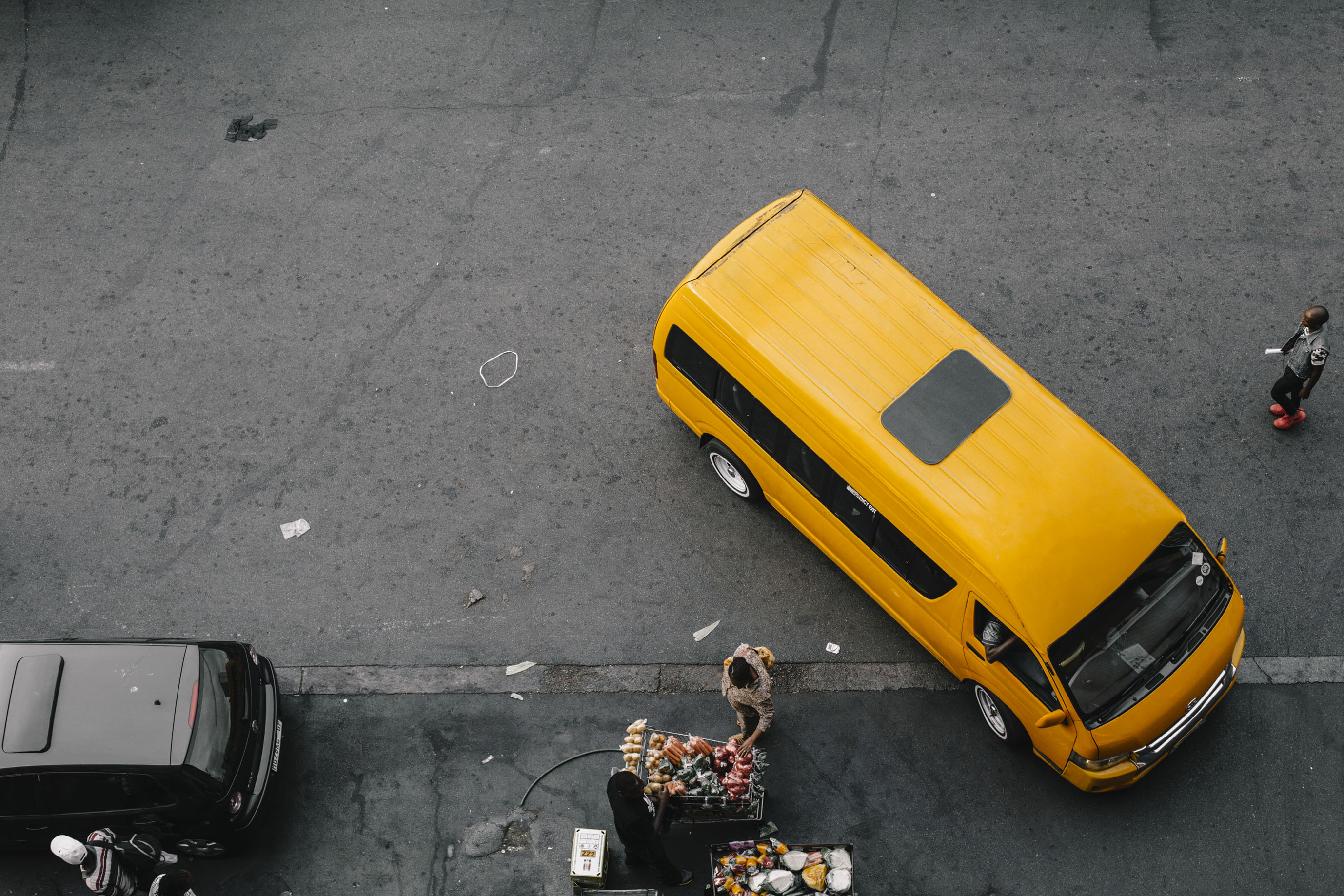 Moalusi, who graduated as a fine arts photographer from Tshwane University of Technology, had long been hesitant to apply for anything at all, until his girlfriend nudged him toward the portfolio review. His reluctance, he explains, was largely because of too few “local eyes and ears” on his work over the years and the compounding discouragement he felt as an artist.

Moalusi had exhibited his series Mollo/Molelo wa Badimo (Fire of the Gods), on the skin condition vitiligo at the first Johannesburg Art Fair. He continued the series in a body of work that piqued the attention of those in New York. 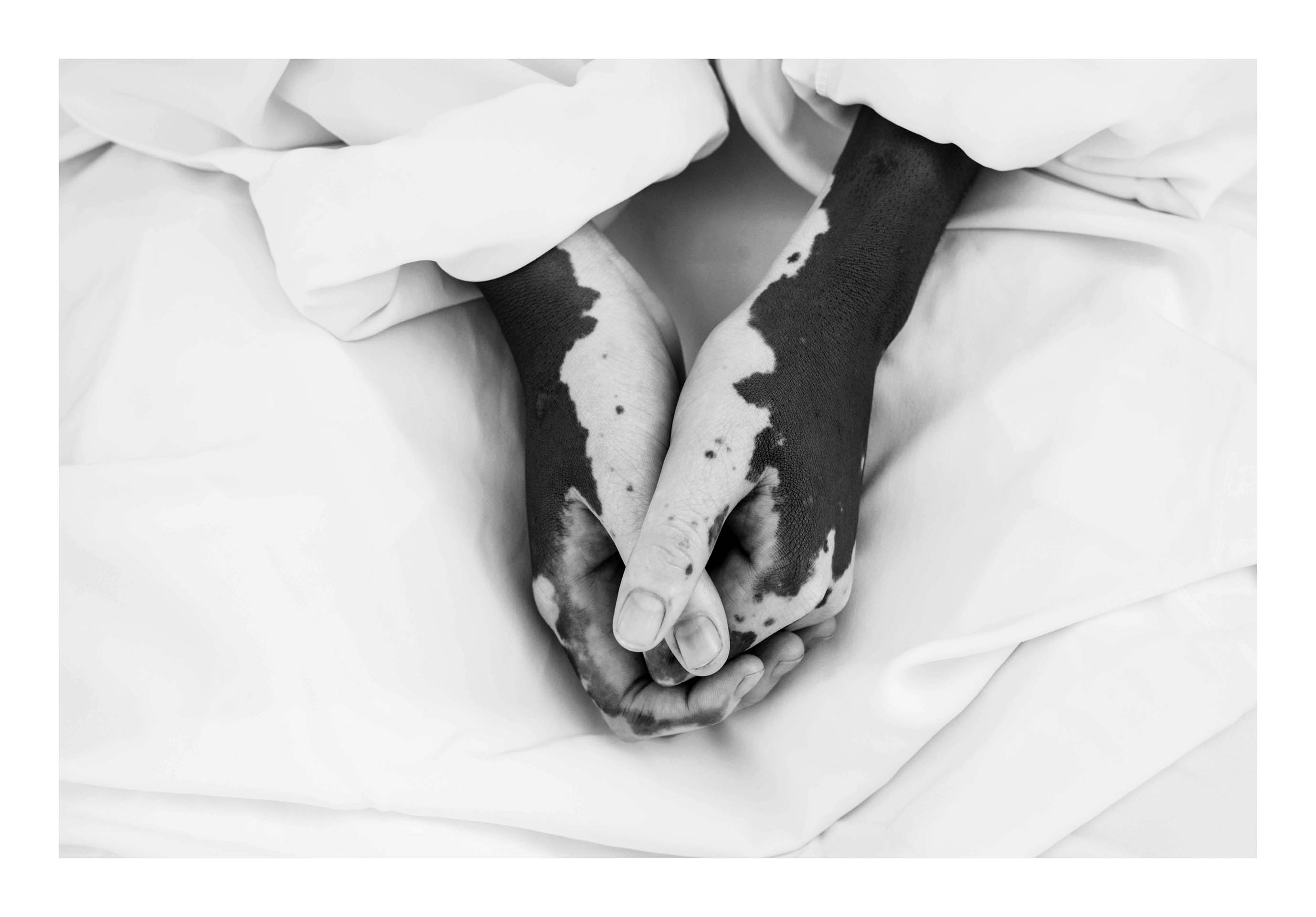 One self-taught, the other university-educated, both uncertain about their odds or their calibre: acceptance into the portfolio review was more than confidence-boosting. Now they want to help other South African photographers to apply, just as their mentors and peers had done for them. “There are kids who are out there [who] are really looking to see that this thing is possible: getting to New York, doing what you love,” explains Tleane.

“[The New York Times] is about to be inundated with applications from South Africa,” warns Moalusi as he approaches Haroon Gunn-Salie’s sculptural memorial to fallen Marikana miners, Senzenina, on show as part of the New Museum’s 2018 triennial.

The sight of Haroon’s work, of life-sized spectres of Marikana, rustles something in each of us.

Our time is up and we agree to meet later, this time at a different end of town: Long Island City, Queens, a long-haul subway ride from their Brooklyn apartment.

We take a walk towards Queensboro Bridge along the East River. They are wide-eyed and tired. “I don’t think I’ve ever, ever spoken about my work this much,” Tleane says. “It feels really good. Different perspectives, new eyes, new people. Talking about it also grows the work for me.”

Moalusi affirms this with a soft click of his camera.

Talking about the lessons learnt from the review, Tleane and Moalusi found themselves struggling to defend work and processes. For Tleane, it was the absence of a singular body of work that earned him the most criticism.

“They loved the work but reviewers kept saying [I should] work on one thing,” he recalls. “I consider my work [itself] to be a body of work. With me, my main thing is to try change perceptions of black spaces, to try change certain stereotypes about black people. Whether it be a portrait, whether it be street photography … it has to fall under that theme.”

Moalusi was “faced with the question at the review of: ‘What kind of photographer are you going to be? Documentary or editorial?’ And my response was ‘I’m a documentary photographer who shoots in studio, so …’”

He says his is the story of a black South African whose life, as a teenager, went from township to white suburban Pretoria almost overnight as the clock struck democracy in 1994. The dualities of his work reflect the dualities that run through him.

Taking the critiques in their stride, their pluralities will not easily be given up. “Let us also not be naive,” Tleane adds. “They’re letting us into their space because they need to learn too. I have a lot of work to do back home. I’m not going to change my work or my vision just because I’m here.”

It was an affirmation that, though Tleane’s work may be “based in South Africa and mostly for people in South Africa”, that is more than fine: it is necessary.

Moalusi, whose work was highly praised by both National Geographic and Vogue, learned through Nwagbogu that it is perfectly possible to be a black photographer and unintentionally commit the same exotifications that colonial photography has long inflicted on people of colour. “I needed to hear that,” he reflects.

“What I’m learning from Kgomotso is that, if something feels good to him, he will work with it immediately … as opposed to overly conceptualising [it]. It feels a lot more honest,” says Moalusi.

Tleane adds: “And I finally understand what this guy has been going on about, talking about ‘bodies of work’ since we first met. He’s a master networker, too — I can’t keep up.”

Walking back from the river in search of a not-too-shiny bar, the conversation continues to ebb and flow — wildly optimistic along 29th Street and critically reflective at the corner on to 38th Avenue.

The openness with which they critique their own creative processes is the strongest sign that their work is connected to something far greater than each of them. Not even the Big Apple could sway that, it seems.

The conversation turns to the gatekeepers of the industry, the proverbial security guards of global opportunities.

Tleane says that, according to Estrin, co-editor of The New York Times Lens blog, “they started the review [because] in the beginning it was just a bunch of white American photojournalists being sent out into the world to ‘capture’ it. And because editors are facing the problem of having all these talented photographers who are photographing ‘Pulitzer-winning’ things [photographers have] idolised the framework created by publishers … and now everyone wants to be Pulitzer-winning Kevin Carter.”

Carter, a news photographer in the turbulent times in South Africa, won his Pulitzer for a photograph of a starving Sudanese child and a vulture. He took his own life at the age of 33, three months after winning the Pulitzer, because, as The Guardian reported, his father said “he always carried around the horror of the work that he did”.

It’s a reminder that benchmarks can become moral blindfolds too.

“Us, now, doing the type of work we’re doing highlighting the spaces we come from. This comes from a place of love. That’s what matters. That’s what people need to see,” Tleane reasons.

On companies and scandal

Coolie Woman and me