Race towards a brave new world

The floor of the hall adjoining the DP de Villiers Stadium in Sasolburg is crawling with brown ants, which deliver stinging bites to the ankles of anyone standing still for long enough. It’s the dry September heat that drives them indoors.

Outside, a mini sandstorm is raging — raised by the solar cars competing in the 2018 Sasol Solar Challenge as they make their way into the small Free State town. The drivers emerge every now and then from the toy-like cars, their racing suits clinging to the sweat beneath.

The challenge, which started last Saturday and runs for a week, involves nine teams from around the world competing to cover the longest distance between Pretoria and Stellenbosch. On a route winding through the Free State and the Eastern Cape, the drivers and their teams negotiate the inevitable technical trials brought on by an inconsistent sun. 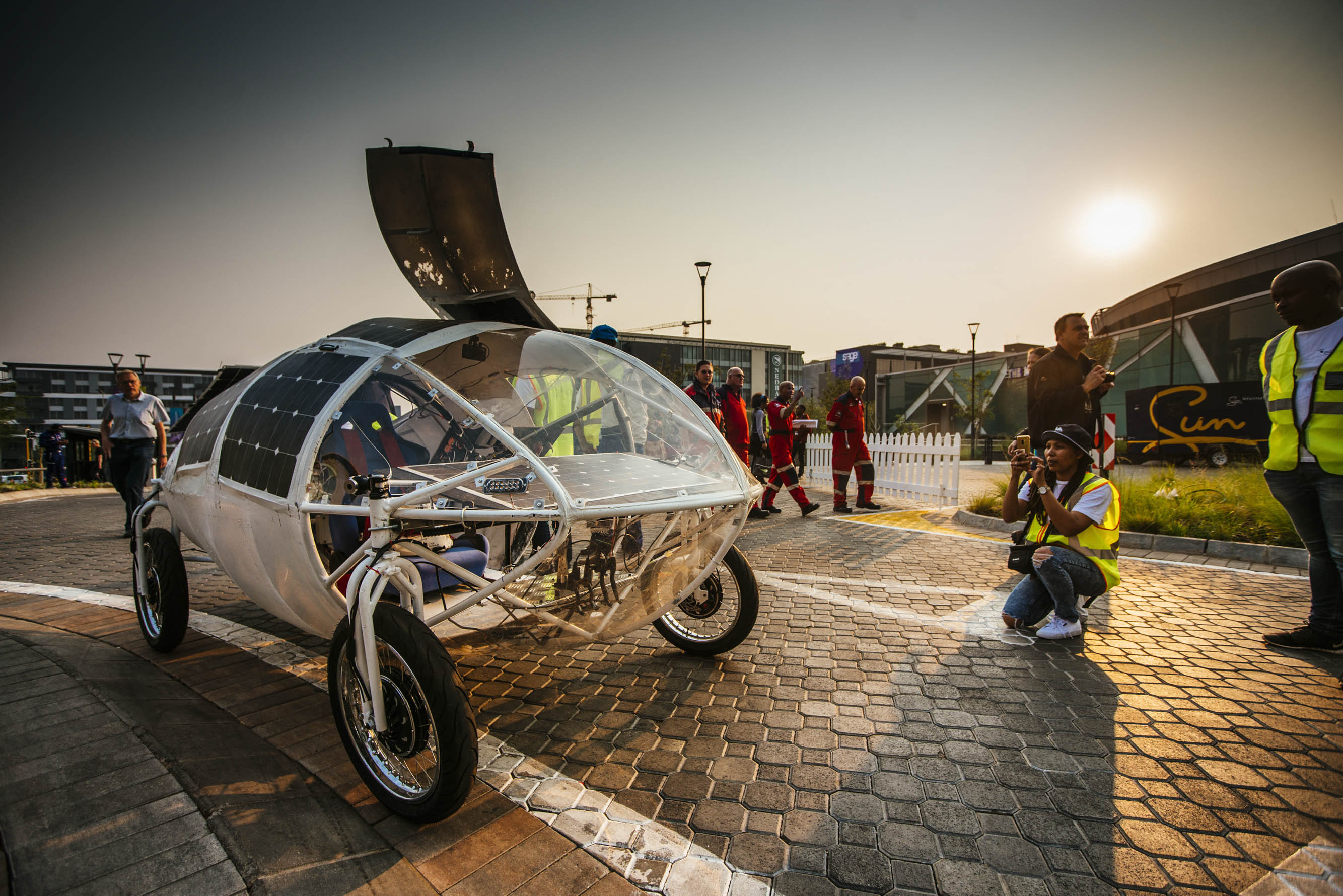 Sasolburg is the first stop in this gruelling excursion. But its stadium, and main attraction,is near empty.

“We put up a big banner outside. We put pamphlets all around the town,” says Jaco van der Westhuizen, his only leg jutting out in front of him from his wheelchair.

Van der Westhuizen has lived in Sasolburg for 36 years, having spent most of those years working at Sasol after which the town is named.

Despite his 25 years atone of South Africa’s largest coal-mining companies, a solar-powered future is something Van der Westhuizen looks forward to. “What we’re doing now is very bad for the world,” he says solemnly.

Though the country is still largely reliant on coal-generated energy, in April the department of energy signed agreements with 27 independent power producers (IPPs) — marking a R56-billion government investment in renewable energy. The country’s gradual turn to renewable energy is exemplified by the growing provision of off-grid energy sources, such as solar energy, to low-cost housing.

A 2018 Statistics South Africa report shows that, of the country’s 213 municipalities, 22 provided free solar electricity systems to about 113200 households. Some of these solar panels peek through the terrain as you pass the outskirts of small-town South Africa on the route of the solar challenge.

Veteran solar car enthusiast Professor John Storey says that, at the first solar challenge in Australia in 1987, this would have been a rare sight.

“At that stage, basically nobody had solar panels on their houses and there we were putting them on cars,” he says.

On these cars, a solar panel converts sunlight into electricity. That electricity can either go directly to the motor to drive the car or be stored in a battery, the physicist explains. He adds that a lot of the strategy that goes into the challenge is in managing this stored energy.

It is designed to be difficult. “You’re constantly forced to deal with challenges that you can’t necessarily foresee,” Storey says, his Australian accent now not out of place in Sasolburg.

The first major challenge for the teams comes on the first night as the dry heat gives way to a thunderstorm that, rumour has it, ends up blowing off 20 roofs in Kroonstad.

One team, from the Tshwane University of Technology (TUT), has to rebuild its cockpit and solar array overnight, after damaging them in an accident on the last stretch between Kroonstad and Sasolburg. 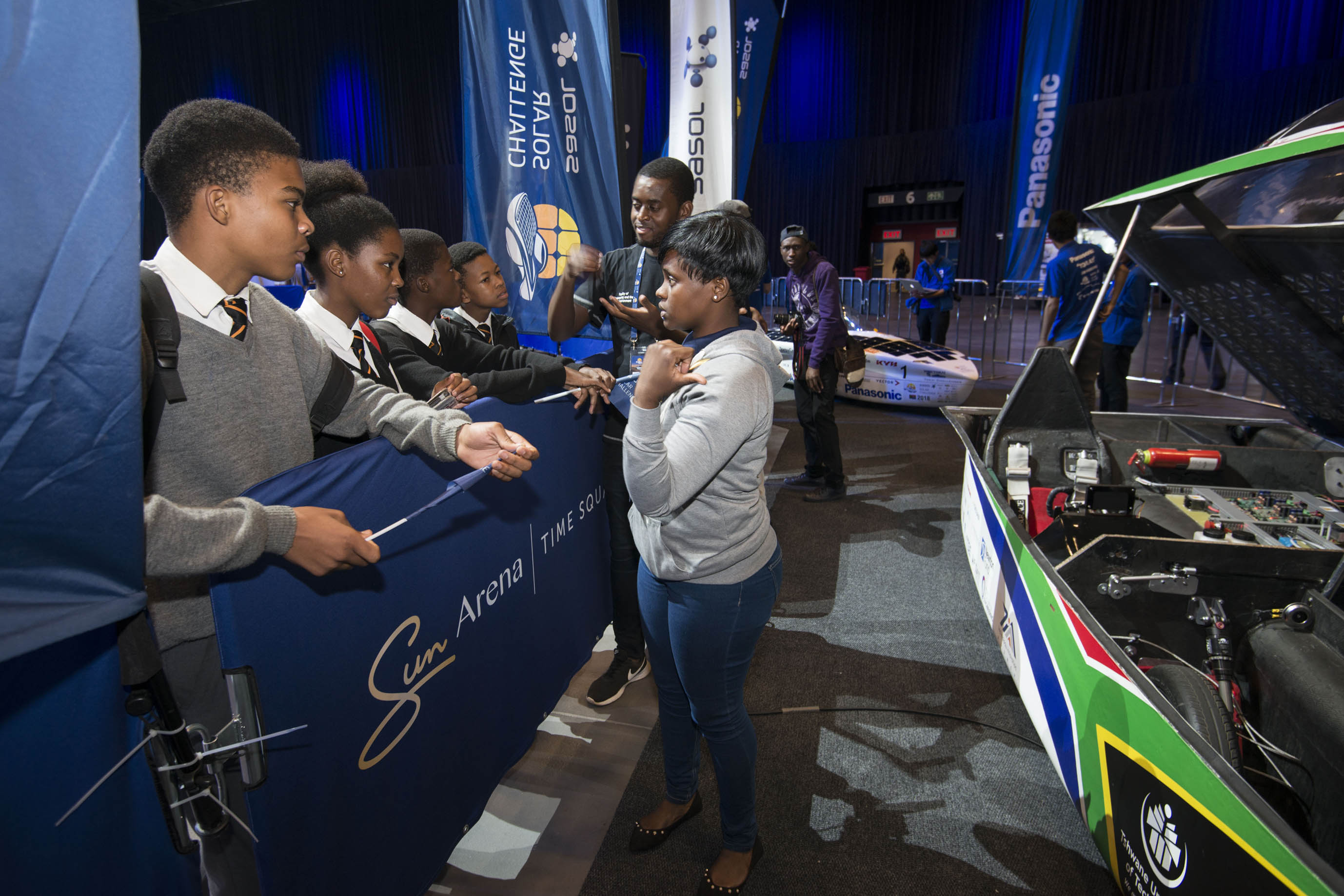 Their car, Sunchaser III, finished the first leg behind the accomplished international teams — Tokai from Japan and Nuon from the Netherlands — which both clocked the same number of kilometres.

The team is still dealing with the damage a day later in Edenburg, a dusty town 80km south of Bloemfontein. Bongani Malabele and Gift Khongota sit with their fingers lodged uncomfortably between the wing and the body of the car.

Malabele explains that, during the accident, the car lost its wing mechanism so they have to use their fingers as a hinge.

Malabele is a driver, but he and Khongota also worked on building the body of the car from carbon fibre.

Growing up, the mechatronic engineering student fixed bicycles. He started when he was about ten years old in his hometown of Bushbuckridge in Mpumalanga. This is where the dream of one day becoming an engineer was sparked.

Soon the team is off again.

Inside the van that supports the solar car, the heat distills a distinctly masculine odour.

Malabele falls asleep almost immediately to the sound of team leader Johannes de Vries — called “meneer” by the team — radioing in directions to the driver following close behind.

Malebele’s knees are sore from driving and another teammate has taken the wheel today.

But, sitting next to him, David Scholfield remarks that it’s all worth it.

“More people have been to space than have driven a solar car,” he says.

It’s cloudy out, a fact the team has to weigh up in considering how far to travel today.

De Vries points out that this is exactly the weather that gallium arsenide — the material used in making Nuon’s solar panel — thrives in. It can cost thousands of dollars to make a strip about 20cm in diameter, compared with the $5 it takes to make the same strip in silicon, the material used by most teams.

This is just one of the many advantages the Dutch and some of the other international teams have over South Africa. The highly regimented Nuon and Tokai are in a class of their own — some South African teams can’t even try to keep up.

Sasol’s involvement as the main sponsor of the challenge is not necessarily an indication of their switch to renewable energy.

Sasol group marketing manager Nozipho Mbatha tells the Mail & Guardian that the reason the company has put so much money into the challenge is to get more people into engineering.

“Sasol is one of the biggest employers of engineers in the country. They’re the ones that feel it the hardest when we don’t have people studying engineering,” says the founder of the South African solar challenge, Winstone Jordaan.

The company has recently been hit by strike action, sparked by Sasol Khanyisa, a broad-based black economic empowerment scheme intended to provide financial benefits to 23000 black public shareholders and workers. Trade union Solidarity, which represents mostly white workers — many of whom are engineers — has called the scheme discriminatory.

Jordaan stresses the importance of creating an altogether new workforce. He scoffs at the idea that South Africa’s move towards renewable energy will cost jobs, a concern raised by trade unions in the wake of Energy Minister Jeff Radebe’s IPP deal.

Lungile Ntshulana, a member of the Cape Penisula University of Technology (CPUT) team, understands this concern. “There is a huge possibility that many mines will have to shut down once people realise that the sun never runs out,” he says.

Sitting on the edge of the Gariep Dam, he talks about the trials the CPUT Solar Flyers have faced in trying to get their car on the road. The challenge is almost halfway through and their car has yet to be declared roadworthy.

Unlike Nuon, which has been working full-time on their car for more than a year, CPUT had to put their car together in under a month. The team only heard about the challenge in July and still had to wait for their funding to come through before actually being able to work on the body of the car. A solar car can cost millions to get on the road.

Waiting for the rest of the TUT team to arrive at the control stop in Edenburg is Daisy Nesindande.

Nesindande talks with her hands, her short nails revealing thin slivers of dirt. The only woman on her team, she draws attention to her nails as proof that she is one of the boys.

“You know how it is,” she says referring to the marked gender disparities in her field — keenly felt at a challenge in which not many women take part.

From the sidelines, Jordaan admits that transformation has been slow.

“But the key is to get people started,” he says.