We all know that drinking puts us at risk of more than just some serious hangovers.

You probably know that alcohol can do a number on your liver. Chronic alcoholism can lead to a liver condition called cirrhosis that can increase your risk of liver cancer, among other things.

And there’s more, Charles Parry explained to Bhekisisa recently. Parry is the director of the Alcohol, Tobacco and Other Drug Research Unit at the Medical Research Council of South Africa:

“Any alcohol consumption raises a woman’s breast cancer risk. Drinking four glasses of wine a day would increase a woman’s chances of getting breast cancer by about 50%, according to a 2016 study published in the journal, Addiction.”

A recent study published in The Lancet medical journal now suggests that no amount of alcohol consumption may be safe.

“Previous studies have found a protective effect of alcohol on some conditions, but we found that the combined health risks associated with alcohol increase with any amount of alcohol,” study researcher Max Griswold said in a statement. Griswold is a senior researcher for the United States’ Institute for Health Metrics and Evaluation Institute for Health Metrics and Evaluation.

Griswold and his team estimated that, in one year, people 15 to 49 who drank one alcoholic drink — like a can of beer or small glass of wine — a day increased their risk of developing a related health problem by .5%, compared with non-drinkers.

This risk increased to 7% in those who drank double that a day and shot up to almost 40% in people who drank consumed five drinks a day, meaning that in one year 1 252 people in 100 000 would develop an alcohol-related problem.

But did you know that drinking also puts you at an increased risk of developing TB? TB remains the leading cause of non-violent deaths in South Africa, according to Statistics South Africa.

Read why knocking back five beers a day or more could put you at risk of the infectious disease: 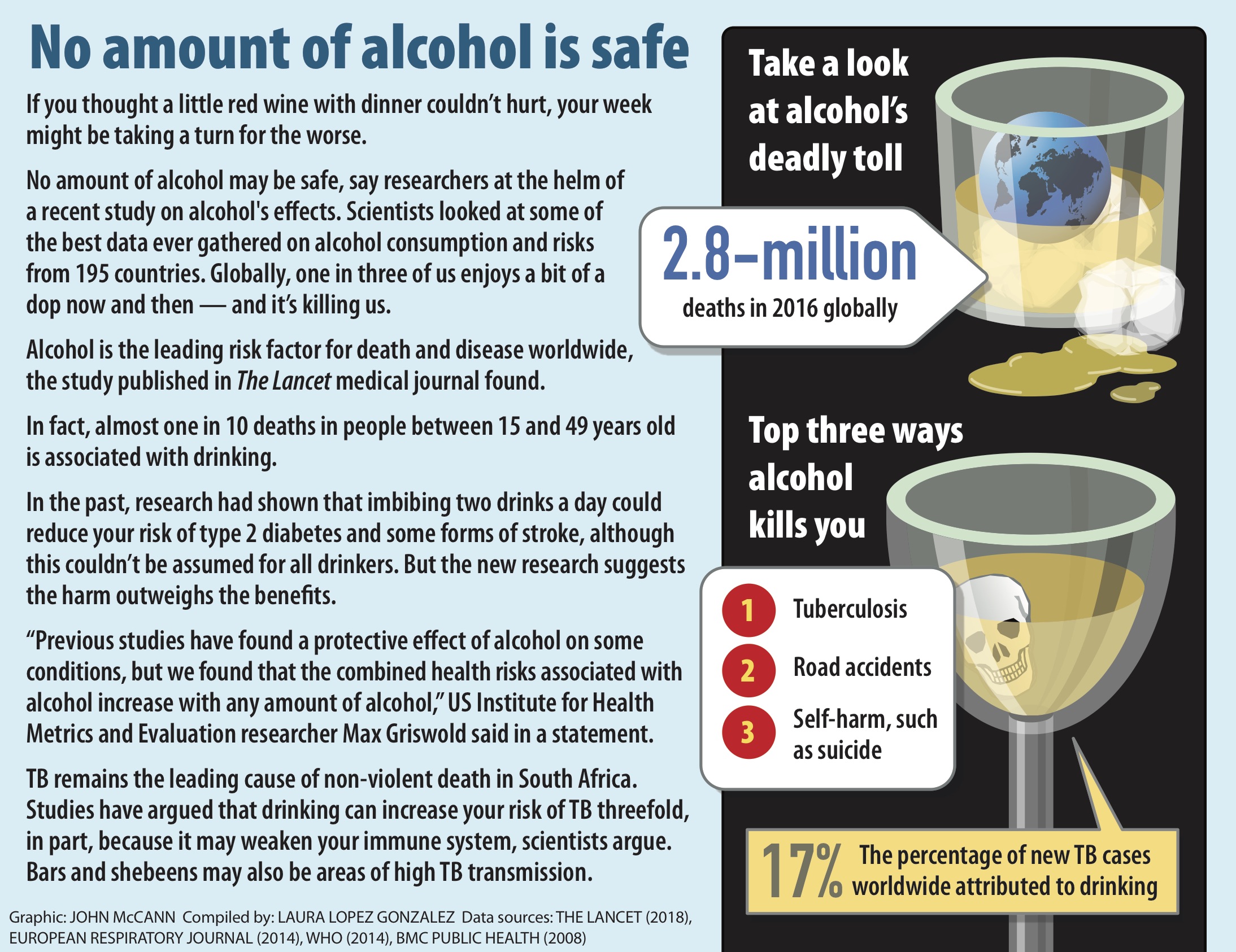 Alcohol kills in many and unexpected ways, a new study reveals. (John McCann)

Drinking was linked to almost one in five new cases of TB globally in 2014, a 2017 study published in the European Respiratory Journal found. Heavy drinkers who consumed more than 60 grams of ethanol per day — or five beers or more — had an almost 70% higher risk of TB compared to non-drinkers, the research shows. It argued 250 TB cases per every 100 000 people were attributed to alcohol in South Africa in 2014.

To put it in perspective, about one in seven South Africans say that’s exactly how much they knock back on an average day of drinking, a 2017 South African Medical Journal study into binge drinking revealed.

[8:53 am 8 October 2018 This story was updated to include more information on the risks found in The Lancet study. The story was similarly updated on 1 November to include additional statistics]