While the country was fixated on the #FeesMustFall protests that changed the face of higher learning in South Africa, workers were fighting for their very survival. The #OutsourcingMustFall movement got less media attention, but the workers’ struggle and its outcomes would change lives forever, writes Bongekile Macupe

“I felt like I was a prostitute. I used to feel like I’m being passed from this man to another,” says Lindiwe Monkwe, who over the years worked for different companies as a cleaner at Unisa.

Monkwe was one of the thousands of cleaners, security guards, groundsmen and those in catering services at universities in South Africa who fought to be employed directly by these higher education institutions.

The Wits Workers’ Solidarity Committee had, in 2013, reignited the battle against outsourcing, which began at the University of the Witwatersrand in 2001. The workers’ movement gained momentum in 2016.

Although some universities gave in to the calls to end outsourcing, others are still locked in protracted negotiations with workers.

In 2016, Monkwe stood outside Unisa draped in a black refuse bag in an effort to ward off the Highveld winter chill. For two months of the strike action she received no salary — the last payment she got was for R489. The company that technically employed her and the other workers regularly sent SMSes. Go back to work or you’ll be fired, it threatened.

But Monkwe knew what she was fighting for. A single mother with three children at school, her R2 700 monthly salary was not enough to make up for the creaks in her back.

“It was difficult. I was so aggressive, I was angry at everything, everyone. At some point I even questioned my reason for living,” she says.

But there was no turning back.

The endless rounds of negotiations led Unisa to agree to employ contracted workers from June 2016. The university also introduced a multidisciplinary task team that would finalise the process of ending outsourcing. Part of the announcement by the university council was that workers at the lowest levels, such as cleaners, would receive a minimum wage of R3 500, which would rise to a minimum wage of R5 500 by 2020.

Still, striking workers were unsure that this promise would be kept. Their access cards had been blocked, hampering communication with official channels.

“On May 31 2016, we slept outside campus, all the cleaners,” Monkwe recalls. “We didn’t know whether the next day we would be employed or not. It was so cold.”

Kwena Manamela, a security guard at Unisa, and his colleagues went on strike for 13 months. Next to the university is a park, unofficially named Freedom Park, where they would gather daily, living off a staple diet of bread and juice.

The university council had also announced that security guards would get R4 000, targeting a minimum wage of R5 500 by 2020.

But, says Manamela, security guards would not budge and carried on with their protest, demanding a minimum salary of R8 000.

Along the way there would be many casualties.

Scores of security guards were dismissed by the companies for not showing up for work.

Says Manamela: “Some of the comrades, their wives left them because of that thing, because they could not put anything on the table. It was bad. Some of them were arrested and charged for this struggle. As I’m speaking to you some of them have a criminal records.”

Manamela says his wife, who provided for his family at the time, begged him several times to look for a job elsewhere and forget about Unisa. But he refused, believing they were fighting the good fight and that they would eventually win. 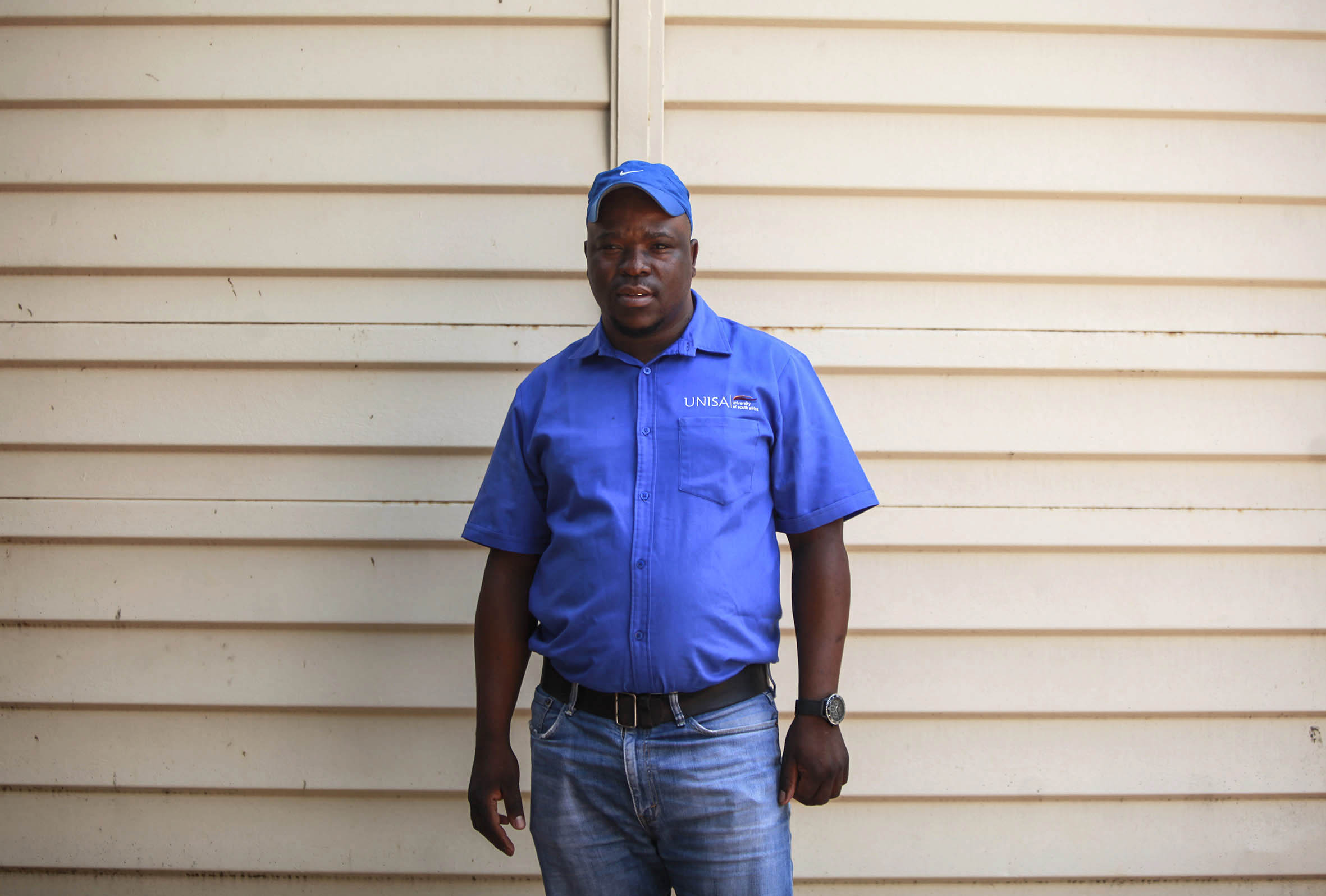 “We were called hooligans, thugs and told that we were unemployable because of our behaviour, but we fought. We fought for what we believed in and eventually we won.”

On April 1 2017 security guards at Unisa were finally employed by the university and now earn on average R9 000.

Jane Mnguni worked in catering services as a contract worker for 12 years, but now sits on the University of Pretoria’s council, UP’s highest decision-making body, after being elected as a representative of her union, the Academic and Professional Staff Association.

Mnguni says her sole purpose now is to take the boardroom to the level of workers.

“It’s a challenge sitting in council, especially for me being a black, young woman. But when I’m there
I think about the thousands of people outside the boardroom that I’m representing because I’m not there for myself.”

Mnguni says it’s easy for people in boardrooms to take decisions without knowing how those decisions will affect people on the ground. 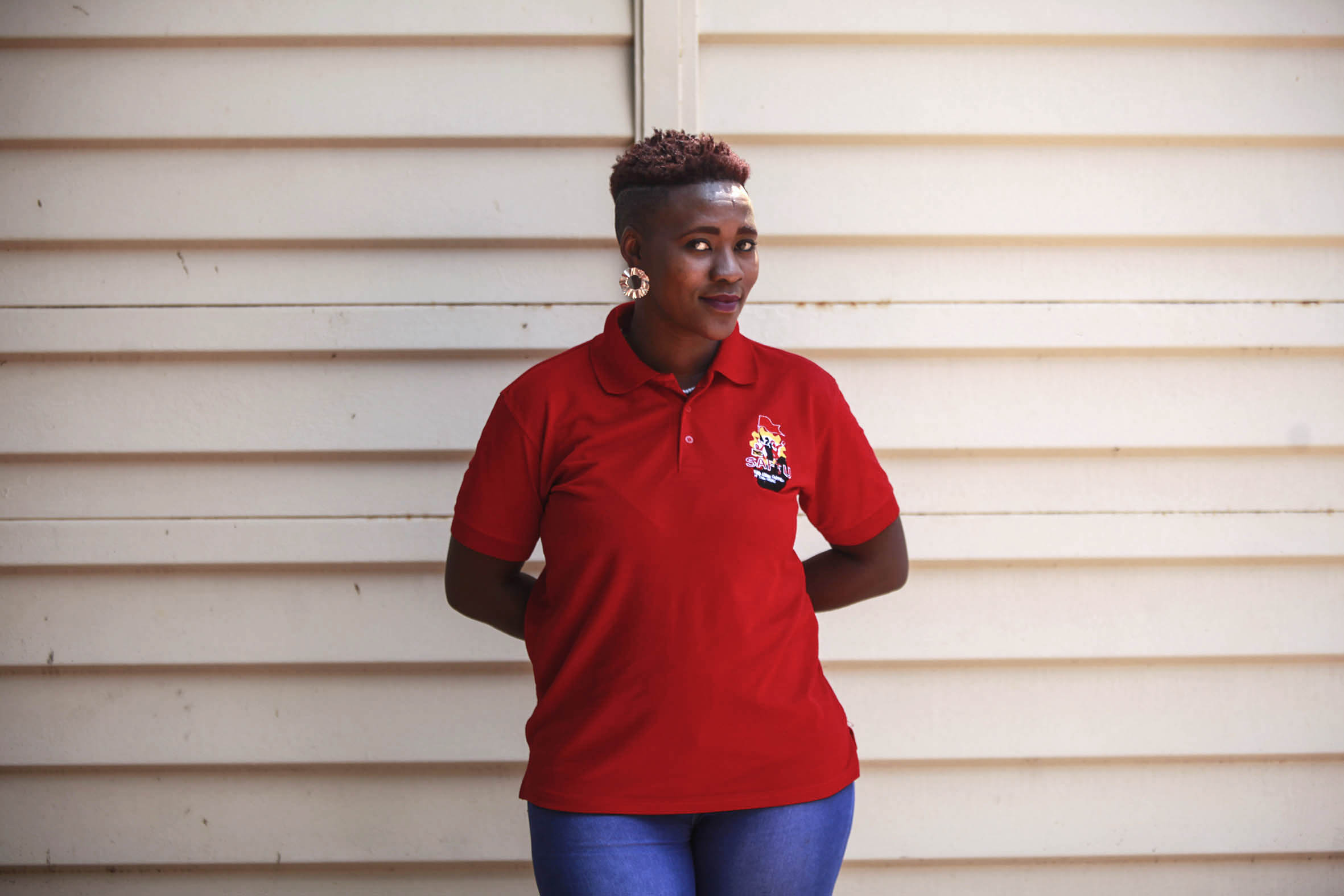 Insourced: Jane Mnguni now sits on the Council of the University of Pretoria (Oupa Nkosi)

“Being there is like being taken to heaven from Earth, you get to see how people up there think of us who are down there. So I’m part of them now, I will take them down so that they feel what is happening on the ground. It’s easy for them to take decisions up there and have no clue of the pressure we have because of the decisions they have taken without consulting us.”

Besides being proud of being a council member, Mnguni also beams about the benefits that come with being a permanent employee, such as medical aid and a provident fund. After years of taking home R2 800, she is now a cashier and earns R7 000 after deductions.

For Eugene Maluleke, a security guard at UP, being able to speak up and raise injustices is the single most important thing that employment by the university has brought about. 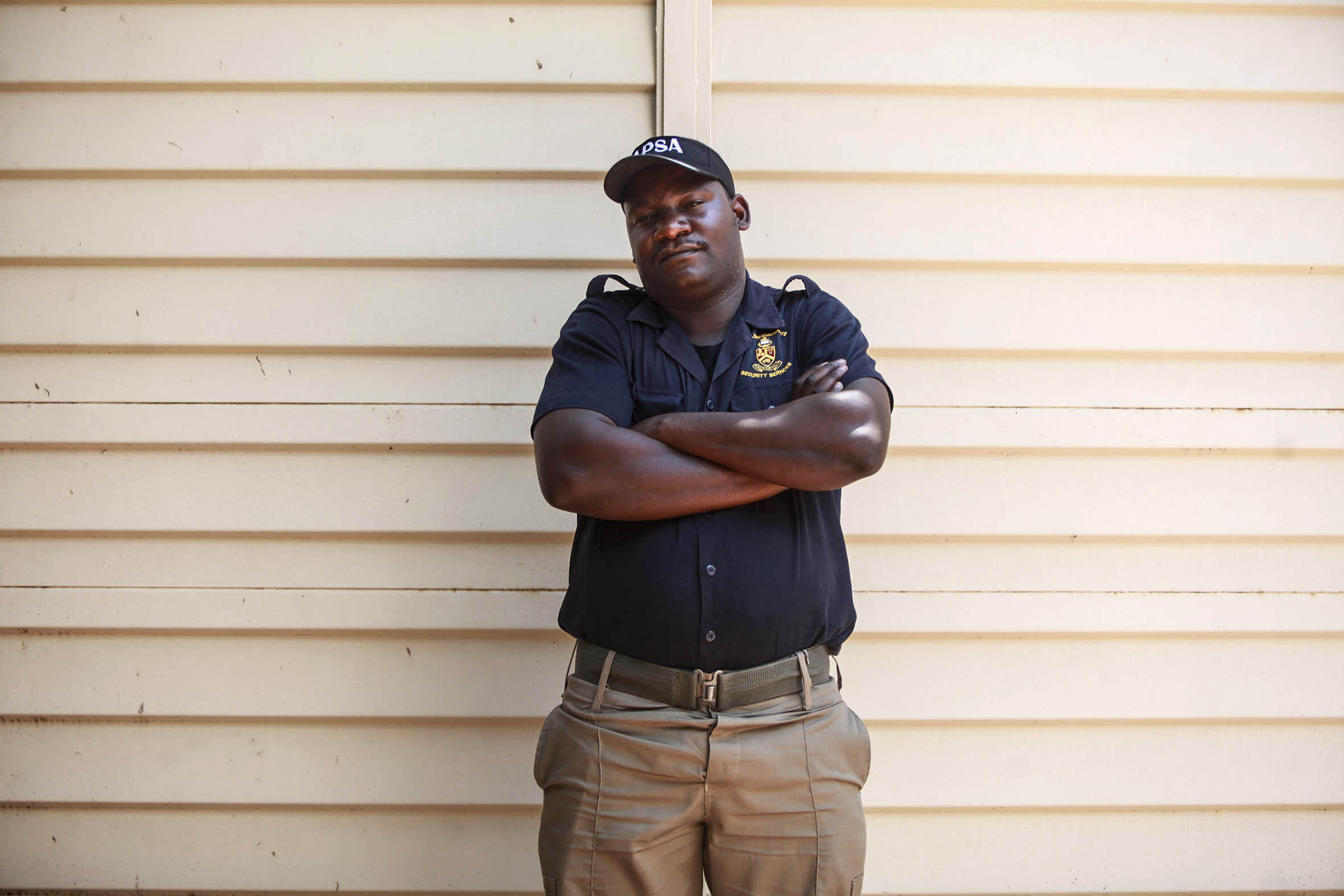 “There are signs that show that I was somewhere and now I’ve moved elsewhere. I didn’t have medical aid then and now I have medical aid,” he says. “It has been my dream to further my studies and I was unable to do so because of financial difficulties, but now that I’m directly working for the university they will be paying for my studies. I want to study criminal justice.”

The best birthday present for Deliwe Mzobe, a cleaner at Wits University, was on October 31 2015. It was on a Sunday and the university finally announced that it was going to do away with outsourcing.

“I was very emotional; I just burst into tears. It was the best birthday ever,” recalls Mzobe.

She says the fight to end outsourcing at Wits had been a 15-year battle, following a decision by the university in 2001 to outsource services. 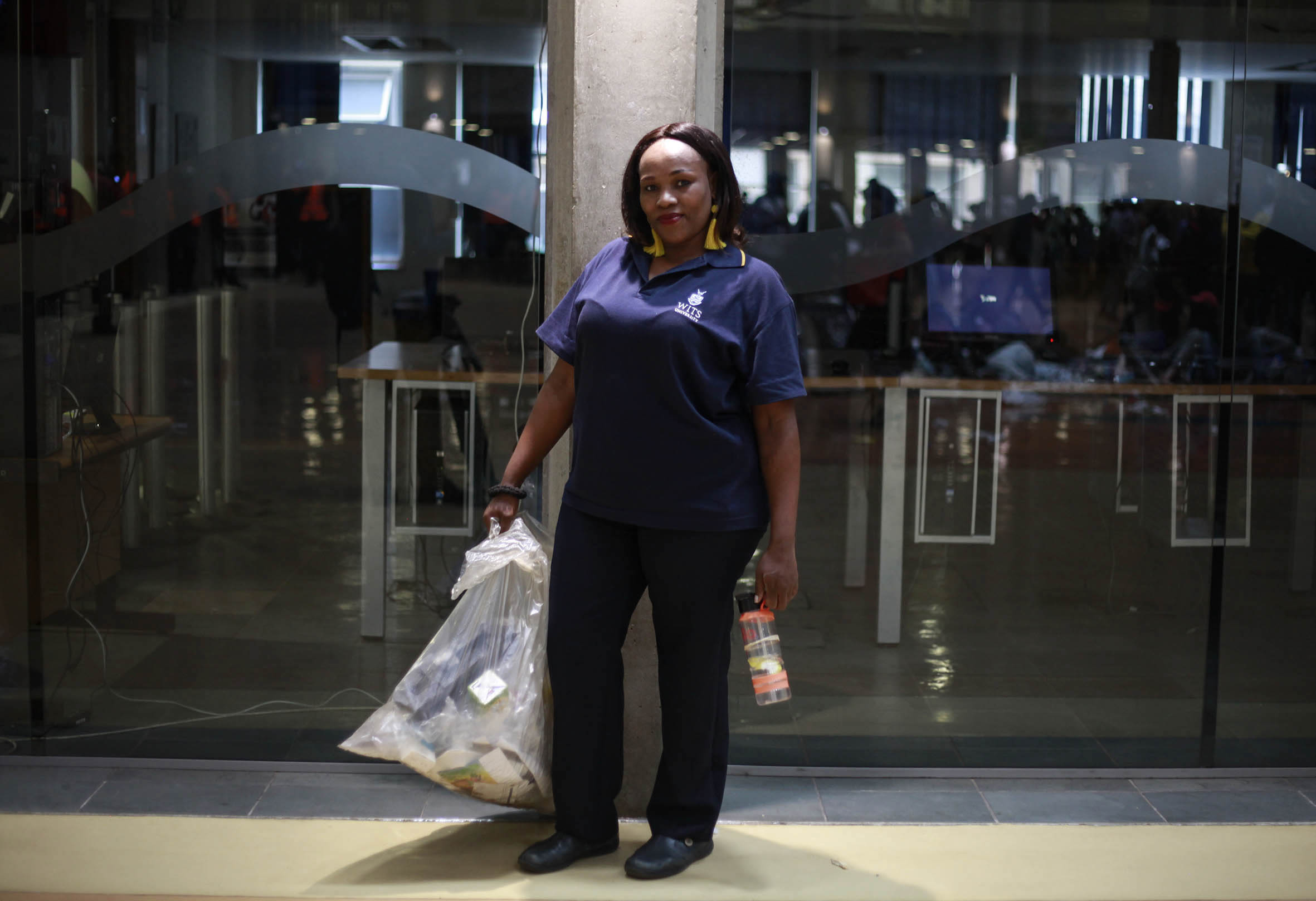 Battle: The best birthday gift for Deliwe Mzobe, a cleaner at Wits University, was the end to outsourcing (Oupa Nkosi)

Mzobe recalls the “apartheid rules” to which outsourced workers had to adhere to.

“We didn’t use some of the toilets, we only cleaned them; we didn’t use all the entrances, we were only assigned one gate to come in and out. And you know how big Wits is, so if you work at West Campus you had to walk all the way to East Campus to use the entrance or exit.

“It was a lot of us. There were about 500 of us. We would all go in that kitchen, which was also used as a change room. It was next to a dumping area, it had no windows so there was no ventilation and there were sewerage pipes running through so it smelt very bad,” she says.

In 2013, the call to end outsourcing intensified. Wits vice-chancellor Adam Habib took over the reins in June that year and he abolished these “apartheid rules”, says Mzobe.

She says previously life was so bad that, after getting paid, she would go to the bank once and her money would be finished. Some of her colleagues did not even have money to buy lunch.

“I know of two colleagues who used to eat out of the bins on campus. Life was really bad. We would go to the university’s dump site and pick up broken chairs, tables and carpets to take them home,” says Mzobe.

Although employment by universities has changed the lives of the workers who spoke to the Mail & Guardian, it has also brought its fair share of problems.

The workers spoke about how they still feel like “outsiders” even though they are employees of the university.

“The old staff will always say things that will remind us of the olden days. And they sometimes tell us that after three years the university will retrench us because it belongs to the old staff and not the new staff,” says Mnguni. “They never miss a chance to remind us of where we come from, and it is not nice to hear those things every day. We still feel like an outsider even though we are permanently employed. They call us the ‘insource ones’.

“We will always have that thing at the back of our minds that we were that bitter pill that they had to swallow and now it’s turning their stomach around.”

Another problem the workers are addressing with management is unequal working conditions between the old staff and “the insourced ones”.

#OutsourcingMustFall activist Vusi Mahlangu said it was a “mischievous act” that employers divided workers. He said they always knew the struggle would continue
after contracting came to an end.

But, he added, it was encouraging to see that some universities have taken the plight of workers seriously and ended outsourcing.

As for Monkwe, her prospects are bright. She has registered to study human resources at Unisa, and the university is paying for her studies. 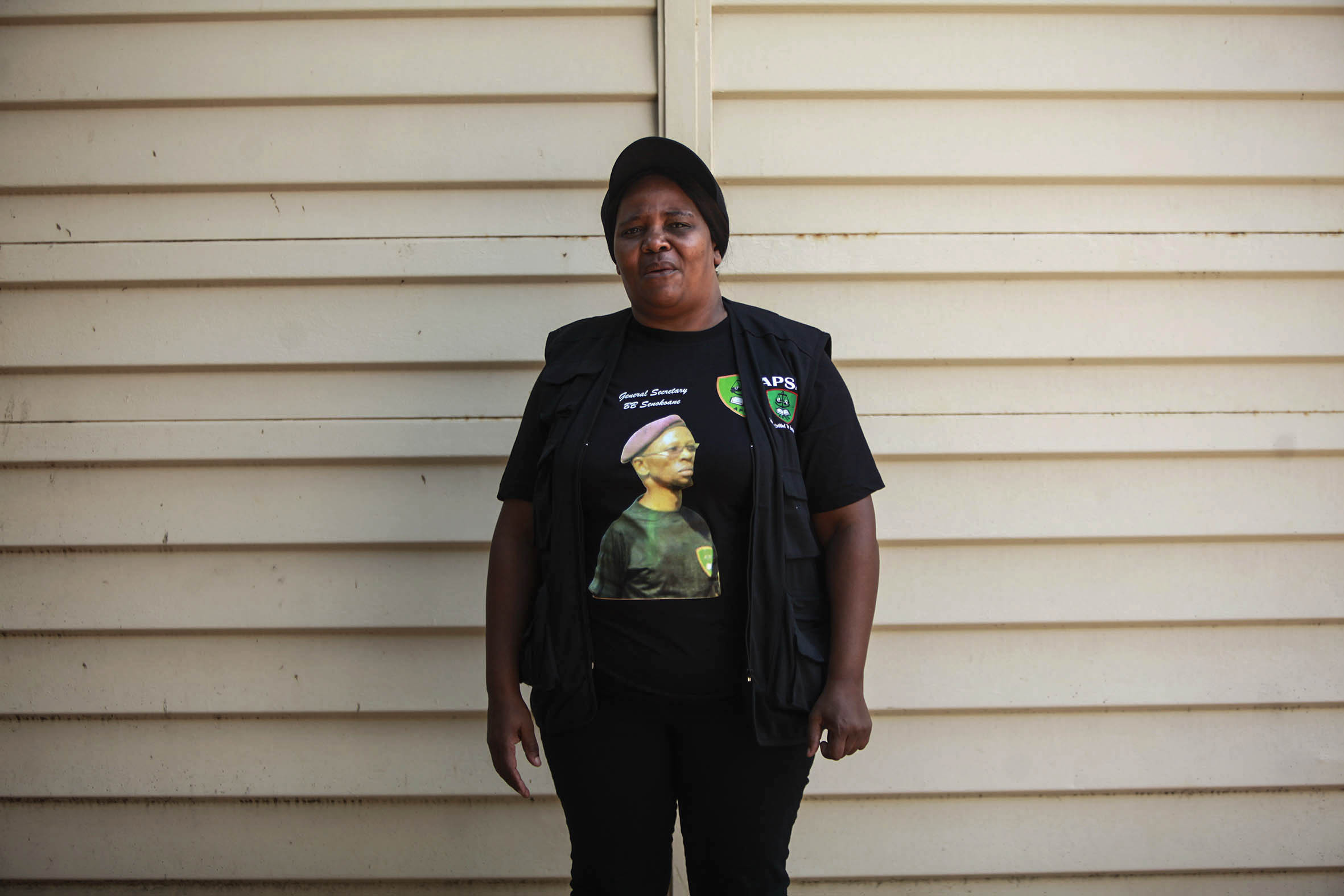 Changing fortunes: Both cleaner Lindiwe Monkwe, who has registered to study went on strike to get Unisa to employ her directly (Oupa Nkosi)

“Some of my colleagues used to stay in plastic shacks but at least today they have managed to buy zinc to build their shacks.

“Today, I have Unisa assets with me outside of campus. Back then I could not even leave campus with this bottled water with a Unisa emblem. Who was I to do that? People used to do as they please with us. They would call us names and we couldn’t say anything, we had no voice. I remember those days.”

African elephants use ‘pachyderm perfume’ to send messages to each other