How state funds are sliced up

Ten years ago, South Africa set aside R54-billion to pay interest on its debt. Today, R202-billion, or 11% of the total budget, is used to service debt.

The remainder of the 2018-2019 budget goes toward paying government employees (34%), current transfers and subsidies, which include social grants (29%), goods and services (14%) and capital spending and transfers (9%).

Looking at data from the past decade, South Africa’s government expenses have grown by nearly a third (26%) since 2005-2006.

Since its inception, the bulk of the education budget has gone towards teachers’ salaries. Finance Minister Tito Mboweni this week said that R220-billion (59%) will be provided for the salaries of state employees in the education sector, up from R192-billion in the previous period.

Overall, however, there will be a R27-billion reduction in government employee compensation. This will come from “natural attrition”, freezing salary increases of certain public officials and public sector employees taking up government’s early retirement offer (55 to 59 years old).

Another focus area is that of school infrastructure. Last year, the spending backlog of these grants was R2-billion. On Wednesday, Mboweni said an additional R2.8-billion would be added to the grant scheme to replace pit latrines at more than 2 400 schools. 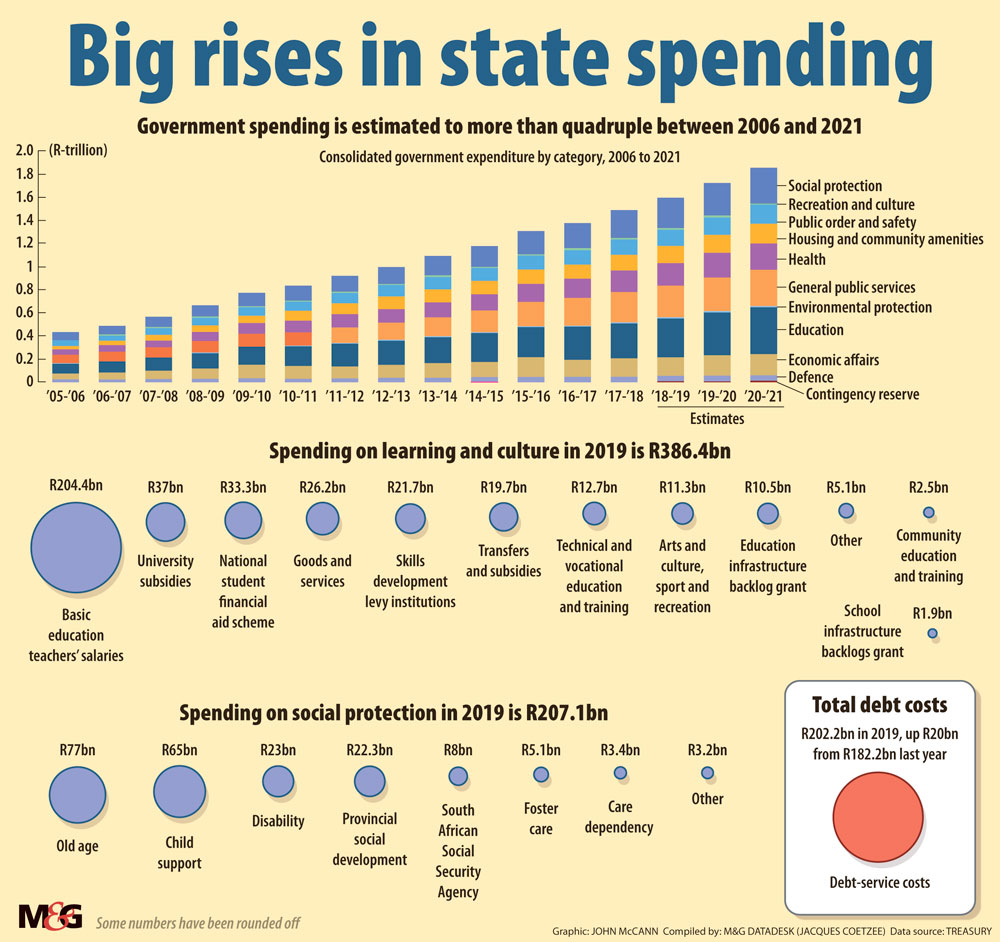 The second-biggest category of government expenses is social development, to which the treasury allocates R278-billion — up from R259-billion in 2018-2019 and a 26% increase from 2005-2006. A total of R77-billion (37%) of social spending is directed to older persons’ grants, followed by child support grants at R71-billion (31%). The rest of the social development budget goes towards foster care grants, policy and administration. In the health category — the third largest — the finance minister announced that R1-billion would be added to raise the wages of community healthcare workers to R3 500 a month. This amounts to R140‑billion, or 63% of the total health budget.

Some of the smallest categories of government spending include the departments of home affairs and arts and culture, which receive R8-billion and R11-billion, respectively.— Jacques Coetzee, M&G Data Desk