It takes more than eight hours of constant heating at 1 000°C to turn coal into the coke that’s mixed with iron ore to make steel.

At the huge ArcelorMittal steelworks in Vanderbijlpark, south of Johannesburg, the heating starts late in the afternoon. Grey and then increasingly black dust starts to pour out of the four chimney stacks at the plant. Depending on the wind direction, this blows over Boipatong, Sharpeville and Sebokeng, and ultimately over the whole Vaal Triangle.

Packed with pollutants such as sulphur dioxide, it reaches its peak late at night when people are asleep and regulators are not at work. In Boipatong, to the west of the plant, people close their windows and doors, and sleep in stifling heat to keep out the dust.

The pollution is often toxic — worse than is allowed by South Africa’s already lenient air quality laws. ArcelorMittal was involved in drafting these as far back as 2006. Then the newly privatised company was making so much profit that its British owner, Lakshmi Mittal, became the third richest man in the world.

During a 2007 inspection, the environment department’s Green Scorpions noted the plant was releasing “excessive emissions of sulphur dioxide” each day.

Thirteen years after helping to draft the air pollution laws, the company says it is unable to stop the emission of the pollutants and is asking for more time to upgrade parts of the steelworks so it can comply with the law.

In mid-March, it held a “community” meeting at an upmarket estate an expensive taxi ride away from Vanderbijlpark. One person attended. The minutes record the person as saying the meeting should have been closer to the people affected by the pollution.

ArcelorMittal’s consultants told him that their models showed the steelworks released sulphur dioxide and nitrous oxide above legal levels on hundreds of separate occasions.

That one person, Samson Mokoena, works for the Vaal Environmental Justice Alliance, which has been fighting with the company since the group was founded in 2006.

It forced the normally secretive steelworks to release records in 2015 of its environmental pollution, after ArcelorMittal fought them all the way to the Supreme Court of Appeal. The records documented violations such as toxic pollutants flowing into local groundwater because its waste dump was not lined.

Sitting in the alliance’s offices, wedged between the sheriff’s office and a sex shop advertising cold energy drinks, Mokoena says the company’s application to postpone legal compliance is not a surprise.

He laughs at the predictability of it, his thin salt-and-pepper-coloured moustache wiggling. “They were part of the team that drafted these laws. A loophole was created and everyone jumped on.” Now ArcelorMittal says it cannot meet the legal requirement for the four kilns where it burns coal coke. Waiting so late is a deliberate ploy, Mokoena says.

“They’re coming at the last minute and dragging the process out so they can twist the government’s arm.”

He gently hits his fist on the boardroom table for emphasis. “They tell government that complying with the law will mean job losses, so they get what they want.”

Companies with old factories are meant to comply with the law by 2020. But a five-year postponement has been built into the process, which ArcelorMittal is taking advantage of. Other major polluters such as Sasol and Eskom are doing the same thing. Their applications have to be approved by the national air quality officer in the environment department.

The department says ArcelorMittal has reported higher than legally sanctioned pollution for every quarter since 2016. A compliance notice was issued last year, telling the plant to improve its record or face a fine.

The department also says, “in concurrence with the affected municipality”, it will undertake a “rigorous process with ArcelorMittal’s application” when it is received.

Mokoena says the department is failing to protect people’s right to a clean environment, guaranteed by section 24 of the Constitution.

“In the Nineties, we had hope. We had a new Constitution and fantastic legislation. But government is not ensuring that companies comply with that law. Things won’t change now — they’ll get the postponement and keep on polluting.” 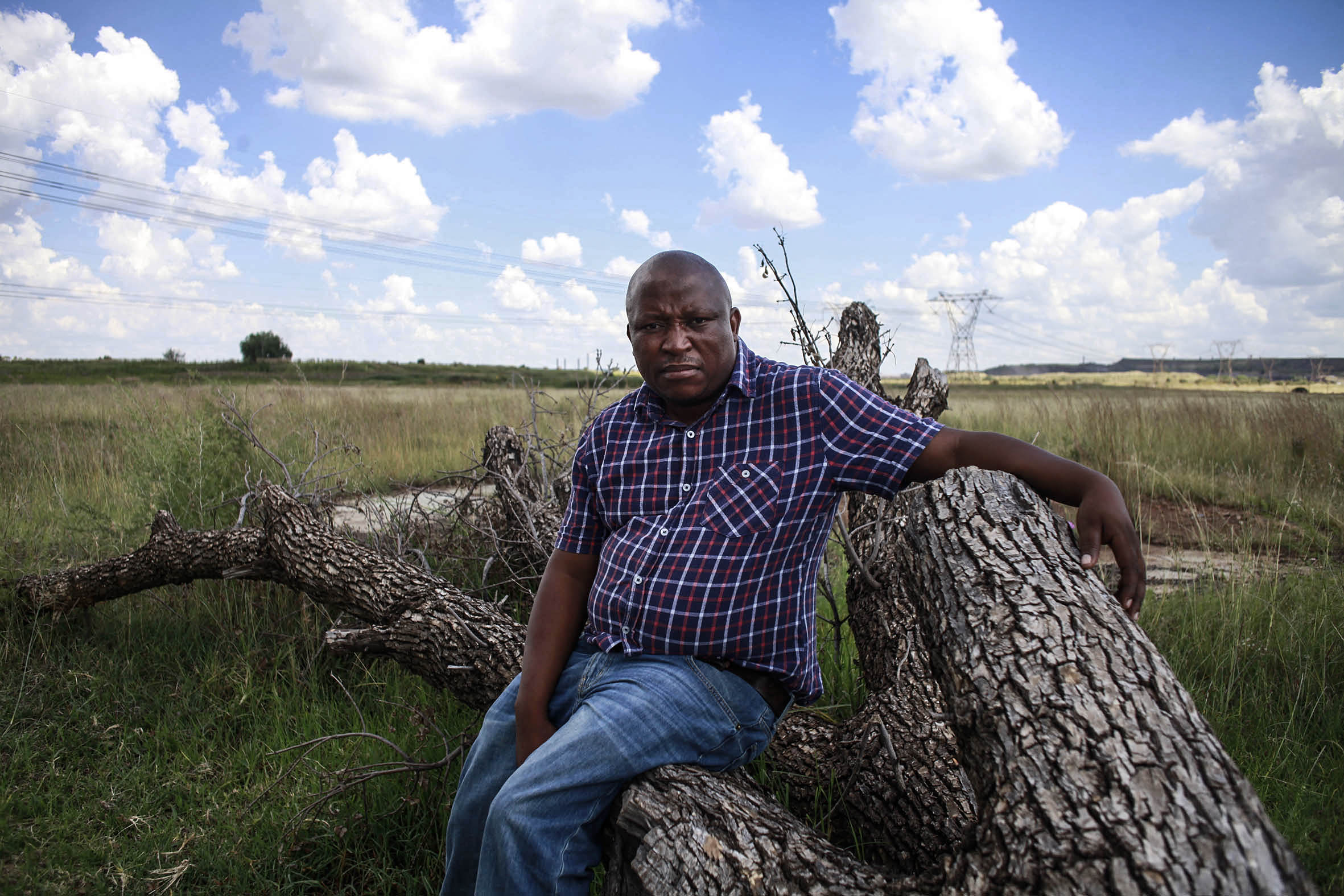 Samson Mokoena is a co-ordinator of the Vaal Environmental Justice Alliance, which has taken on ArcelorMittal. (Oupa Nkosi/M&G)

The Mail & Guardian visited the western side of ArcelorMittal in 2015, so this time it went to the eastern side, next to the plant’s waste dump.

Separated from this by a narrow tar road, resident John Dewing uses a stunted and deformed baby chick to illustrate the effect of pollution. Gently placing it on a wooden bench under a tree in his cluttered yard, he says nothing here grows properly. Chicks die young, after growing “bones and bits” where they shouldn’t. Cats die from eating pollution-riddled rats. It took his prize cow three years to come on heat, and that was only when the polluted air flowing from ArcelorMittal was at a low. 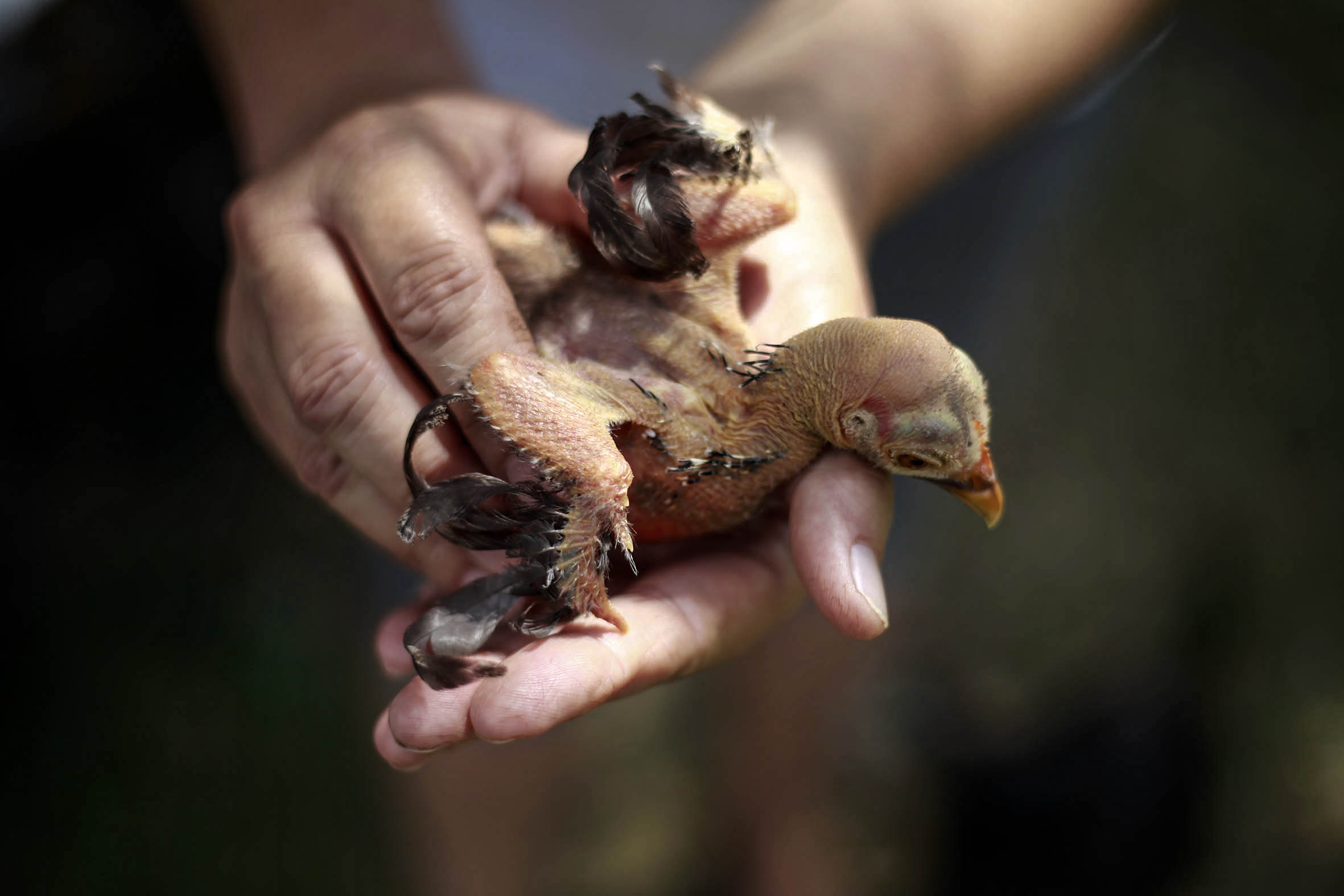 Holding a battered green smartphone in his paw-like hands, he flips through pictures of dead foetuses. He pauses at some of the hundreds he has of polluted air, sometimes so dark and thick it looks like a storm is brewing over the steel plant.

His olive-green hat is so worn and stained with sweat that it looks brown. He speaks with an urgency that is only slowed by deep coughing. “It’s absurd. Where else does this happen except here?”

At one point in a two-hour conversation, he gesticulates at the ground, “deformities, deformities”.

He sends his pictures on WhatsApp to the company’s environmental officer, sometimes getting promises of urgent action.

Asked about its application, ArcelorMittal says it “continues to engage with various authorities on certain environmental issues” related to the Vanderbijlpark plant. “These issues are largely to do with the interpretation of the application of atmospheric emission licences as well as exceedances of the minimum sulphur-related emissions.”

The company says it will spend “a significant amount” to “address emissions” at the plant over the next three years.

Having lost a court case to ArcelorMittal on a technicality, and without answers to his petitions, Dewing has been sending his photographs by email to the environment department, which are as polite as his conversation. 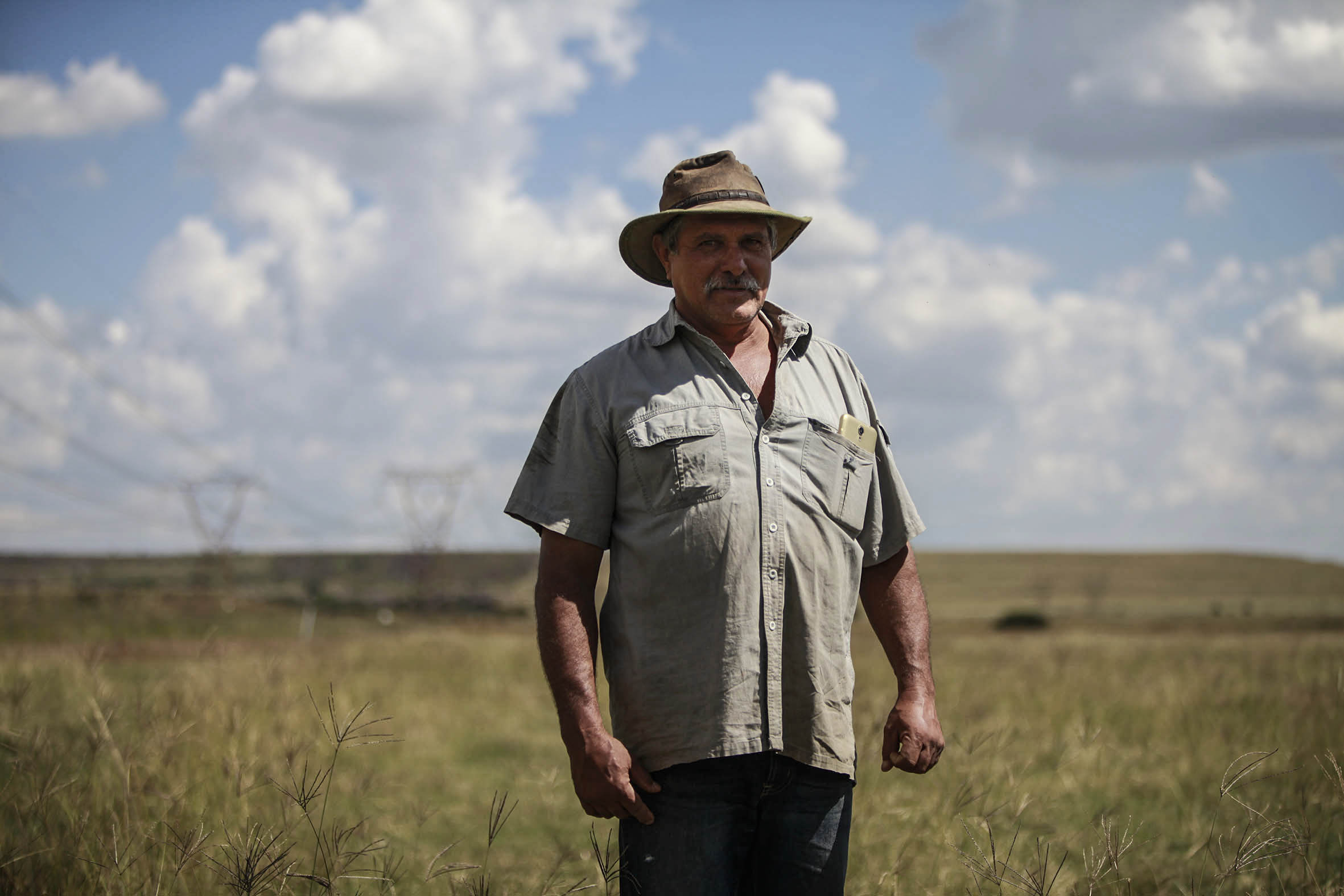 Johan Dewing lives near the steel giant and its waste dump. His health has been harmed by air pollution. (Oupa Nkosi/M&G)

The emails don’t reflect his rolling rs and read more like stream of consciousness than a well-constructed letter. One starts:“Dear people of the DEA [department of environmental affairs]” and goes on to say:“Hazardous waste is being dumped through air pollution on my property.

“The nearby ArcelorMittal waste dump contains a mix of arsenic, cadmium, lead and zinc — when the wind whips it up that can mix with the sulphur dioxide and tiny dust particles coming from the coke kilns.”

The only time he got a response, officials from the department visited his home. Sitting on his couch, one asked: “But aren’t you afraid of people losing their jobs?”

Recounting this, Dewing says, after a moment of surprised silence, he said: “I don’t want people to lose their jobs. But what about my health?”

After living nearly four decades near the steelworks, Dewing says he has little left in the way of health.

Because the department of health does not collect data on upper respiratory health problems, complaints like his are treated as circumstantial — even though his health issues are common throughout Vanderbijlpark and the Vaal’s industrial heartland.

ArcelorMittal did not respond to questions about how many people get sick or die because of its operations.

For Dewing, this means only more days when his home is subjected to pollution. On bad nights he wakes up with his nose bleeding.

“That’s when I take my children to the [Vaal] river to breathe.”

It is both misleading and patronising to suggest that democracy has somehow been imposed by the international community against the wishes of ordinary people. Instead, it has been demanded and fought for from below
Advertising