After Crispian Olver controversially lifted the lid on graft in Nelson Mandela Bay in his 2018 book, How to Steal a City, a new book shifts the spotlight on to the other major motor hub in the Eastern Cape, Buffalo City.

In City of Broken Dreams: Myth-making, Nationalism and Universities in an African Motor City, South African anthropologist Leslie Bank focuses on the historical roots of state capture and argues that the present political and economic malaise in the Buffalo City (previously East London) municipality can be traced back to the

1960s. At that time, a burgeoning, settler-dominated regional economy, driven by British capital and a paternalistic ideology of trustee liberalism, was overturned by the apartheid state.

Bank links the success of the city in the mid-20th century to settler involvement in the Allied war effort and to the rise of separatist, English-speaking, white nationalism, which set itself up against the political and economic project of Afrikaner nationalism. But when the Afrikaner nationalists came to power in 1948, systematic state capture of the city and the wider region was set in motion.

The Afrikaans enclave of Port Elizabeth was rewarded with regional government offices, a new dual-medium university, an expanded technical college, a wool exchange and advantageous rail rebates to get products to the Reef.

The previously booming industrial city of East London, however, was progressively shut down by the state.

Firms were lured out of the metro to decentralised, state-funded industrial parks in the “homelands”. New freeways and other modernist development projects in the city were brought to an abrupt halt as government funds were ploughed into building the Bantustans, where a new black middle class was created and captured by patronage politics.

From being the fastest-growing industrial centre in South Africa in 1952, East London slumped into relative insignificance by the mid-1960s after a decade of social engineering, during which forced removals from the cities aimed to retribalise the countryside.

Competitive settler capitalism, which had aimed to entrench white privilege, was replaced by a quasi-socialist, statist system designed to prop up the migrant labour system. This rewired the regional political economy, shackling it to the mines and Pretoria.

The apartheid turn also signalled the end of a post-war revival of white liberalism in the region, which had been supported by the emergence of a more inclusive development model. 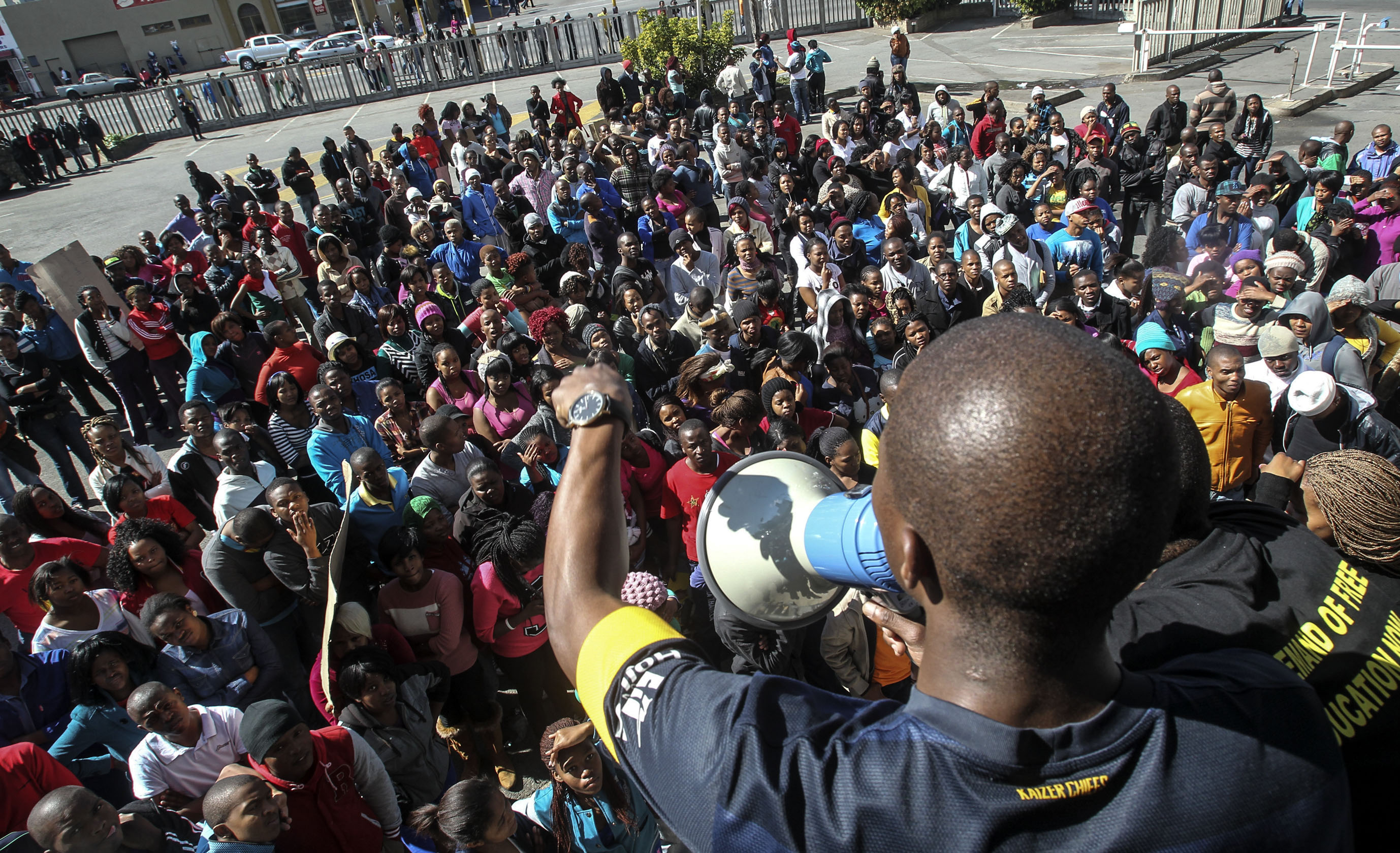 Universities in the area have also failed to transform and develop, angering students (below), who have been agitating for a liveable presence in East London’s inner city for the past five years. (Michael Pinyana/ Daily Dispatch/ Gallo Images)

As their options were closed, progressive elements in the African community, still reeling from the removal of the Cape African franchise in 1936, no longer differentiated between English-speaking and Afrikaner white nationalism and adopted an approach of non-co-operation across the board towards white institutions and power in the region.

A number of forms of separatist African and ethnic nationalism emerged, which saw racial war or ethnic sovereignty as the best way to end perpetual white domination. The Pan Africanist Congress (PAC) was born in the region in 1959 with mass popular support; a few years later, the Black Consciousness Movement extended the criticism of white liberalism.

The legacy of the early form of state capture practised under apartheid has been catastrophic, Bank argues.

He contends that, since the introduction of democracy in 1994, the ANC has in effect adopted a modified version of the core/periphery, apartheid patronage model, rather than seeking to transform it. The party has, he says, reshaped the Eastern Cape into little more than a large, regional Bantustan, “modernising poverty” with the grant system and expanding the African middle class with cadre deployment and state tenders.

Meanwhile, economic dynamism, Bank suggests, has been confined to small industrial enclaves — the so-called industrial development zones, which are dominated by global automotive capitalists, such as Mercedes-Benz in East London, General Motors in Nelson Mandela Bay and Volkswagen in Uitenhage.

Hefty state subsidies are used to keep these companies in the province, although reindustrialisation remains a distant dream. At the same time, meaningful rural development has not materialised because the state has sought to re-entrench tribal authorities.

In the quest for solutions, Bank sees the transformation of the higher education system in the city-region as a critical staging post for effective transformation and development but laments the limited extent to which institutions such as the University of Fort Hare and Walter Sisulu University have been able, or willing, to grasp the nettle.

Neither, he says, has embraced the progressive vision of the 2002 report of the national working group on higher education, which proposed connecting urban growth and higher education in East London-Buffalo City.

As a result, these institutions stand at some distance from the aspirations of their students, who prefer urban to rural campuses, and have been engaged in almost continuous insurrection for the past five years in order to establish a liveable presence in East London’s inner city.

Bank uses the term “occupy urbanism” to describe the orientation of the historically black universities and the new local black middle class, which seem to be “in but not of the city”.

He contends that the bureaucratic bourgeoisie holds the city politically but lacks the commitment to place-based development, preferring to engage in factional political struggles and state capture.

Meanwhile, the #FeesMustFall student protesters have turned on local elites, seeking to expose their attempts to “steal” the city-region and redirect student bursaries and university resources into their own pockets.

But, Bank argues, the student movement has been overly populist and self-centred and has thus failed to produce viable radical or market-led alternatives for regional economic development and social reconstruction.

Bank’s book concludes by invoking the metaphor of imaginary maps, which the great cartographers of the state construct in air-conditioned offices and punt to the people. In the case of the struggling motor city of East London, the old map of apartheid, refashioned by the ANC and the new black middle class, needs to be cast aside for something new, he says. A new beginning must be found.

In this regard, he argues that universities, which are connected to globalised systems of research, can lead a process of reimagination. He calls for the conversion of East London’s central business district and university district into a hub for knowledge production and innovation to help to refashion the city and the region and build a new kind of urban economy unlike that envisaged under the model of industrial enclaves.

Tim Hart is a senior research project manager in the Economic Performance and Development Unit of the Human Sciences Research Council. ‘City of Broken Dreams: Myth-making, Nationalism and Universities in an African Motor City’ is published by HSRC Press. The author will launch the book, with Professor Alan Mabin, at the African Centre for Cities in the department of environmental and geographical science on the University of Cape Town’s upper campus at 3pm on April 3

Tim Hart
Tim Hart is a senior research manager in the Economic Performance and Development research programme. He is a social anthropologist and holds an MPhil in social science methods from Stellenbosch University.
Facebook
Twitter
WhatsApp
Linkedin