The department of mineral resources (DMR) and a Limpopo municipality are at the centre of an investigation by the public protector over allegations that they failed to act against illegal sand miners.

Lepelle-Nkumpiofficials did not respond to requests for comment. It is one of 14 municipalities implicated in the R1.5-billion VBS bank scandal. The municipality deposited over R155-million into VBS, in violation of municipal finance regulations.

The sand and gravel is mined on tribal trust land in different parts of Ga-Mphahlele, which falls under the Lepelle-Nkumpi local municipality. Businessman Lesiba Chuene, who runs a sand and gravel supply company in Mogodi, a Ga-Mphahlele village, holds a mining permit for the areas being illegally mined. He has been fighting a losing two-year battle to get the authorities to act.

Chuenehas reported the matter to various state agencies, including the public protector and the DMR. In an attempt to get the authorities to act, Chuene wrote to the Capricorn District Municipality on October 192018.

“I am writing this letter to you with my heart bleeding;[I have] been so depressed [be]cause corruption just happen[s] in front of my eyes;no one is willing to stop [it].”

Chuene said the contractor was supposed to pay for the minerals but was getting them for free. The Mail & Guardian understands that the value of the sand and gravel used for the Groothoek project is nearly R8-million.

Chuene also raised the issue of the material’s quality control, saying it was not being tested to determine if it meets the required levels for constructing a reservoir. He said this may compromise the project’s future.

These illegal sand miners,who use big earth-moving machines, have also failed to rehabilitate several areas seen by the M&Gin the Ga-Mphahlele district. They have left behind gaping pits that pose a threat to people and livestock.

Their activities have also affected small-scale sand diggers, who sell gravel and sand at R550 per truckload. 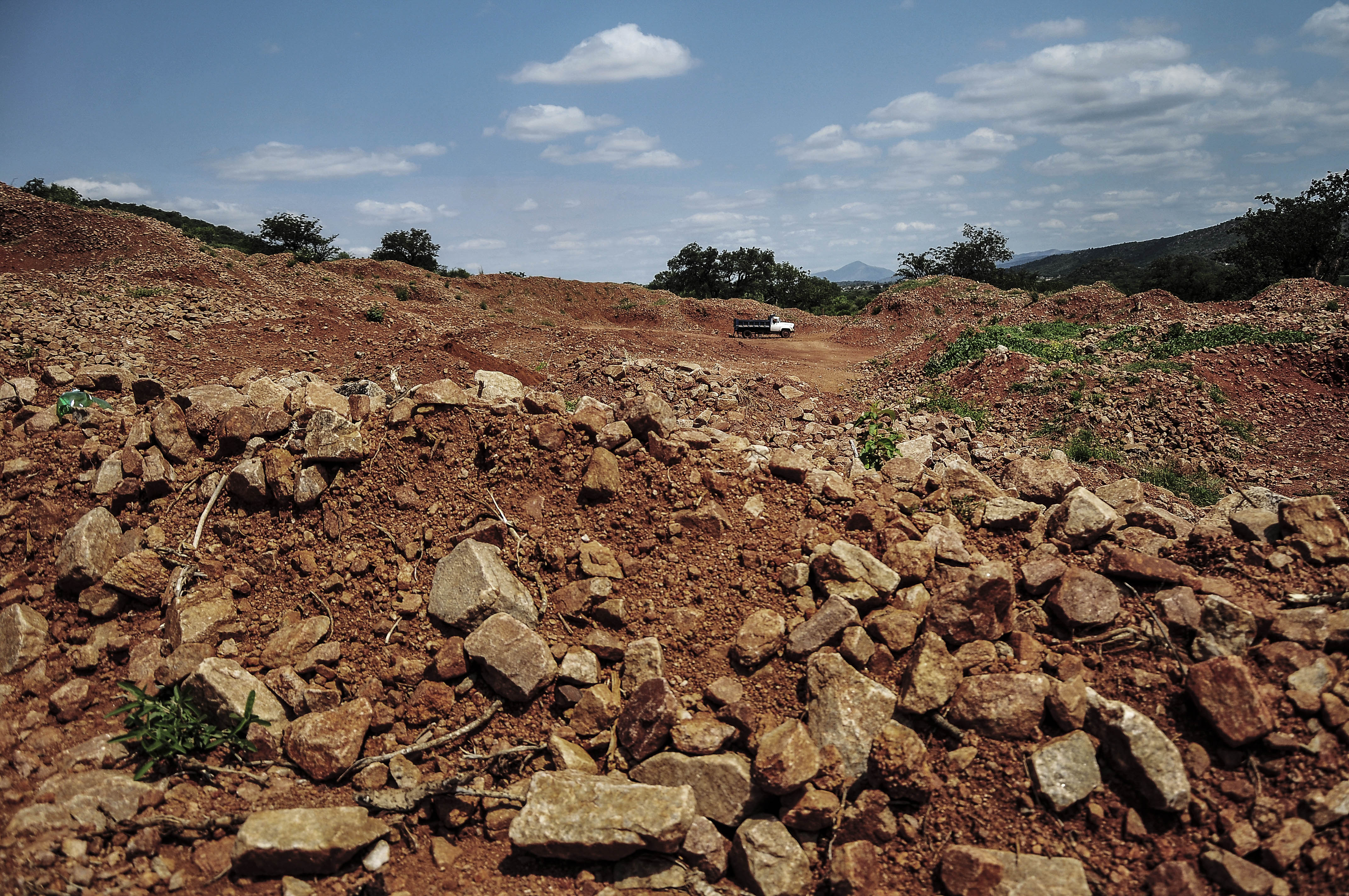 The informal sand miners then use the open pitsto dig up gravel and sell it for R550 per truckload. (Lucas Ledwaba/Mukurukuru Media)

He explained that an inspection was conducted at the area concerned as recently as February 2019.

Segalwe confirmed that Chuene’s complaint centred on the alleged failure by the DMR and Lepelle-Nkumpi municipality to act against the illegal miners.

“Accordingly, the DMR and the municipality are respondents,” he said,adding that according to Chuene, the municipality and the DMR have failed to deal with his complaint that they were allowing mining to proceed illegally on land where he holds a permit.

In July 2017, an official from the department of justice wrote to the Lebowakgomo police station, asking them to “kindly assist” Chuene to open a case of malicious damage to property and for trespassing.

“There is no act of harassment in his case;he qualifies to lay charges. Mr Chuene is having a mining permit certificate in his position [sic],” reads part of the letter.Yet there is no record of a case being opened.

In October last year the DMR informed Chuene by email that its environmental resource inspectors had conducted investigations that confirmed the truth of his complaints. It was signed by Aaron Khathutshelo Kharive, director of administrative enforcement, and said the department would initiate administrative and criminal enforcement actions against the perpetrators.

It also said that the matter had been taken up with the provincial South African Police Services and that a joint operation would be conducted “very soon”.

Albi Modise, spokespersonfor the national department of environmental affairs, said all environmental compliance and enforcement related to mining matters now fall under the purview of the DMR as a result of the introduction of government’s One Environmental System in December 2014.

He added that as a result of the legislative amendments, the Green Scorpions, who previously conducted a nationwide blitz on illegal sand-mining operations, no longer have the principal mandate in this regard.

Furthermore, he said if the DMR or SAPS needed support from the Green Scorpions,they would provide a support function.“It should however be noted that traditional authorities do not have a right to sell sand mined from these areas, unless they have a permit to do so.”

Sand, like gold, diamonds and platinum, is a mineral regulated by law.

“Permits for the legal mining of sand can therefore only be issued by the DMR,” said Modise.

The DMR said that after its inspection in October 2018, it is issuing the perpetrators with compliance notices in terms of Section 31L of the National Environmental Management Act (Act 107 of 1998) as part of Administrative Enforcement.

“However, should it emerge that they are not adhering thereto, criminal measures will be pursued. It is imperative to highlight that the only reason the criminal measures could not be pursued in light of the inspection conducted on October 31 2018 was as a result of no one having been found mining. The DMR will continuously monitor the situation and act swiftly,” said the DMR’s Ayanda Shezi.

She said the department “has and continues to engage the Lepelle-Nkumpi municipality and other stakeholders including law enforcement agencies on initiatives to combat this illegal activity”.

Shezi said the DMR carried out a joint inspection on October 312018 with the SAPS and that no people were found in the act of mining illegally. She said there had been other individuals found by the team during the course of October and November of 2018 and “they had completely stopped with the unauthorised mining activities”.

Unepwarns that the resources are now being extracted at a rate far greater than their renewal and the volume of extraction is impactingrivers, deltasand coastal and marine ecosystems. — Mukurukuru Media

It could prove difficult for government to loosen its grip on the public purse, but economists say the current extraordinary circumstances require intervention
National