It was all the way back in August 2003 when South Africa’s first national director of public prosecutions, Bulelani Ngcuka, announced that Schabir Shaik, the one-time financial adviser to Jacob Zuma, would be prosecuted for corruption.

Shaik was accused of paying R1.2-million to Zuma, then deputy president of the country, over a period of seven years. The idea was to induce Zuma to use his political influence to protect Shaik’s business interests. Shaik was also accused of attempting to secure an annual bribe of R500 000 for Zuma from a French arms company. 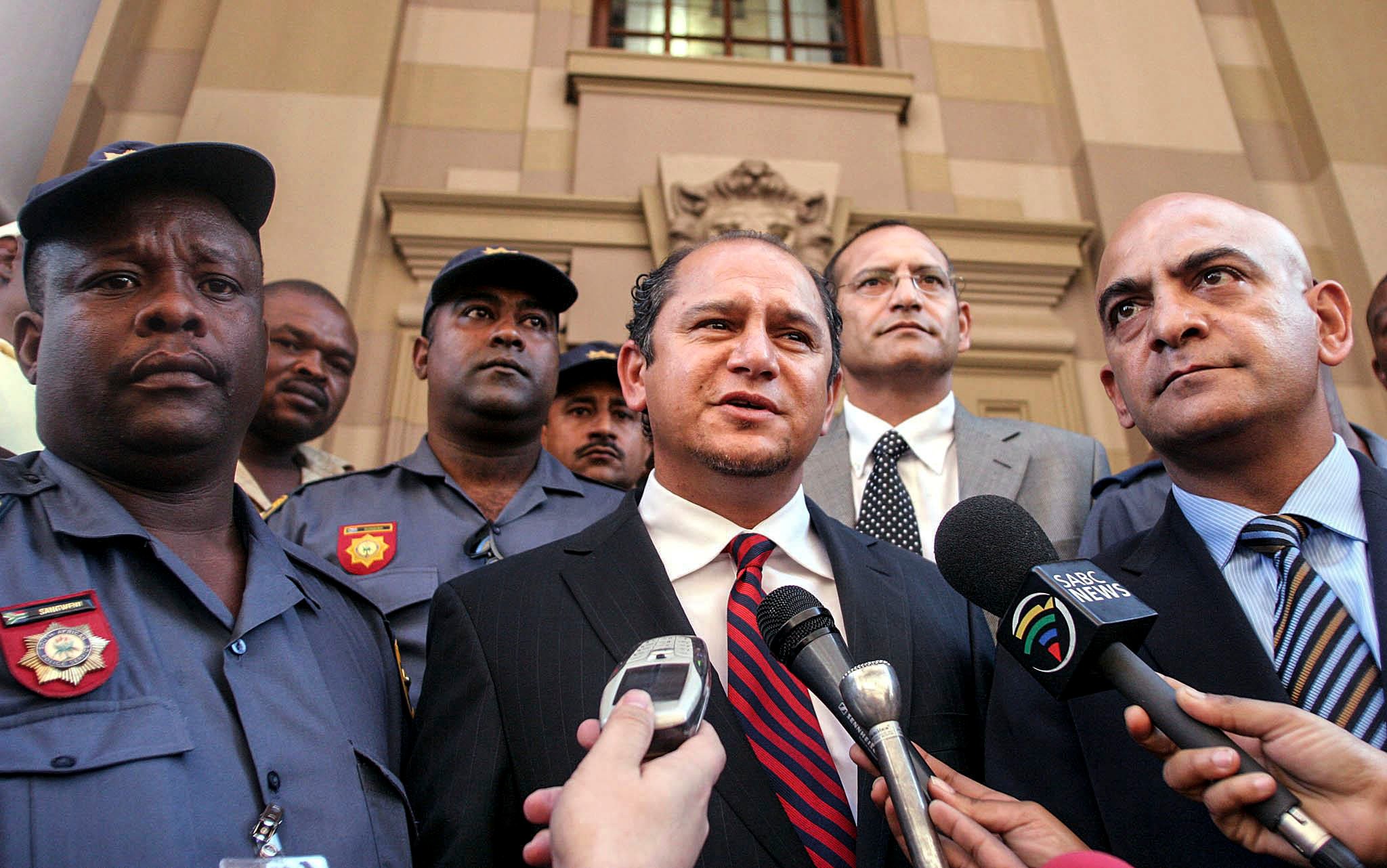 To date, however, only Schabir Shaik has been found guilty of corruption. (Rajesh Jantilal/AFP)

To the surprise of many at the time, Zuma was not indicted alongside Shaik. And, 15 years later, he is yet to go to trial. Instead, his legal team will next week argue for a permanent stay of prosecution, saying the marathon delay has irredeemably tainted the possibility of a fair trial.

When compared to what has emerged from the state capture commission, the amounts of money involved may seem like small change. But the corruption claims have dominated South Africa’s political and legal landscape since they were made all those years ago, dividing the governing party and testing the strength of the National Prosecuting Authority (NPA) and the courts.

Those in Zuma’s corner say he has been the victim of a most vicious political campaign — pilloried in the court of public opinion, yet never in a position to clear his name. For them, this case is about how state institutions were abused to fight political battles — particularly the NPA and its now defunct Scorpions.

“To any objective and truly unbiased mind, the prejudice and injustice visited on Zuma is self-evident. The facts and history of the Zuma prosecution … reveal a pattern of unlawful conduct that should attract the severest reprimand by our courts,” says his counsel, Muzi Sikhakhane SC, in his heads of argument.

For those on the other side, who have been pushing to see his prosecution go to trial, the battle is about the rule of law: at stake is the principle that everyone, no matter how powerful, should face the law if there are allegations of corruption against them.

Counsel for the state Wim Trengove SC says the application is nothing more than a continuation of Zuma’s “Stalingrad defence” — a strategy of using civil litigation to postpone a criminal trial and to delay justice, which the Supreme Court of appeal has said “is of particular benefit to those who are well resourced and able to secure the services of the best lawyers”.

But Zuma’s team argues that there was so much political and improper external interference that he will not get a fair trial. They refer to the so-called spy tapes. These are recordings of phone conversations between Ngcuka, after he resigned as prosecutions head, and former Scorpions head Leonard McCarthy about when to time the service of Zuma’s indictment — before or after the ANC’s 2007 Polokwane elective congress — in order to influence its outcome.

He points to a memorandum from the prosecuting team, led by Billy Downer SC, at the time, which said that it would be “indefensible” to decide not to prosecute everyone involved.

Ngcuka was a “self-confessed political ally” of former president Thabo Mbeki, says Sikhakhane. His “rejection of the advice of his most senior prosecutors points to his deliberate and most sinister motive to prejudice Zuma and to hang him out to dry”.

But Trengove says Downer has explained that, while he and Ngcuka disagreed, it was “a good-faith difference of opinion between two lawyers on their assessment of the strength of their case”.

Zuma’s complaint “is baseless. It is not underpinned by any facts. It is no more than a conspiracy theory,” says Trengove. In any event, says Trengove, the courts have said “again and again” the motive for a prosecution is irrelevant, unless there are also no reasonable and probable grounds for prosecuting.

On this score, both legal teams unpack, in minute detail, the history of the investigation and prosecution and all the accompanying litigation over it; and argue at length about who was responsible for which delays over the years.

Sikhakhane says: “While the NPA concedes to the delay of 22 months, the facts of this matter demonstrate that the NPA was actually responsible even for the delay of more than a decade.”

But Trengove says that Zuma was complicit in, or entirely responsible for, the majority of the delays. On one of the longest delays — the epic eight-year battle to get access to the spy tapes — Trengove says: “It lies ill in the mouth of Mr Zuma to complain about the delay in this period” because he was actively involved in the litigation, at a point even continuing when the NPA had given up.

Trengove says the 22-month delay caused by Ngcuka’s decision not to charge Zuma alongside Shaik was because of the nature of the case against Shaik and how the high court trial system works. But Sikhakhane says: “The blame lies with the NPA. The NPA ought to have taken all necessary steps they needed to mitigate the systemic delays. Despite having unlimited resources, they failed in this regard.”

Thales SA, the French owned company that is Zuma’s co-accused, is also arguing for a permanent stay and is applying to review the decision to reinstate charges against it.

The applications are being heard by a full Bench in the high court in Pietermaritzburg from Monday, May 20 to Friday, May 24.