More than half of the country’s Thuthuzela Care Centres (TCCs) are without counselling services or have been forced to rely on one or two social workers to comfort victims of abuse months after they lost international donor support.

TCCs are one-stop facilities designed to provide sexual and gender-based violence survivors with access to medical, psychological and legal support services all in one place. The centres are a joint initiative of the health, justice and social development departments. Under the arrangement, the health department provides centres with medical services while staff from the department of justice and constitutional development help survivors register cases against their abusers, if victims choose, and go on to prepare them for court.

The department of social development is responsible for providing TCCs with counsellors — a task its historically paid nonprofit organisations to do with donor money. Until recently, the majority of this funding came from the international financing mechanism, The Global Fund to Fight Aids, TB and Malaria. To get this kind of support, countries submit detailed proposals to the body about what they would like money for.

But South Africa has increasingly looked to secure funding for programmes in the districts hardest hit by HIV, in an approach UNAids first recommended in 2007 and reflected in the country’s current HIV and TB plan.

For more than three years, NGOs have known that these shifts would mean that at least some would not be budgeted under the country’s current Global Fund grant. By July, most NGOs had already identified alternative funding sources, according to a 2018 study published by the Networking HIV & Aids Community of Southern Africa (Nacosa).

The trouble was that most planned at least partly to look to the department of social development. Researchers added that it wasn’t clear how many NGOs were planning to do this and few could answer questions about their sustainability strategies in detail.

Meanwhile, international donors and corporates were unlikely to step in to fund counselling services, the report noted. As a result, the uncertainty over centres’ services was palatable.

But last November, at his National Summit on Gender-Based Violence and Femicide, President Cyril Ramaphosa promised that government would make funding available for TCCs — a commitment he reiterated at his state of the nation address this February:

“We are expanding and dedicating more funds to places of support, such as the Thuthuzela Care Centres,” he said.

In Emalahleni, Mpumalanga, over the entrance to the city’s one-stop centre for abuse victims hangs a small placard, bearing the TCC motto: “Thuthuzela Care Centre: Turning victims into survivors”.

Today, months after Ramaphosa’s announcement, about 40% of the country’s 55 centres have had their international funding renewed.

But Emalahleni’s is not one of them.

Instead, it is among almost three dozen facilities that are without a new major source of money to pay for the psychosocial services that play a crucial role in helping people in not only prevent HIV infections and unwanted pregnancies but also to cope with trauma following attacks — to become survivors.

When asked about the lack of funding, the President’s spokesperson Khusela Diko directed Bhekisisa to the department of social services.

Diko explained: “When the president makes announcements or promises, he expects the relevant departments to follow through with his promise.”

Bhekisisa made various attempts to get a response from the national department of social development for over two months but our queries were met with silence. 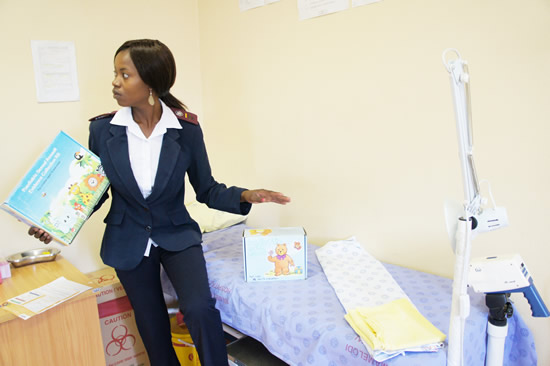 In the Free State, Sasolburg’s TCC is also without counsellors after losing funding. East London’s centre stopped offering psychosocial support in April after its money ran out, support services resumed a month later after it negotiated new international funding.

What does it mean when Thuthuzela Care Centres lose counsellors? It’s about much more than just having an empathetic shoulder to lean on for victims.

A 2017 study found that counsellors from nonprofits allowed TCCs to extend working hours, enabling some to stay open 24 hours a day and over weekends.

But NGO counsellors also provide centres with HIV counselling and testing and are crucial to allowing TCCs to provide post-exposure prophylaxis or Pep. The one-month trio of daily antiretroviral medication can reduce the risk of HIV infection by about 80%, 2016 research published in the journal Clinical Infectious Diseases shows. It has to be taken within 72 hours after a sexual assault to work — the sooner it’s taken, the more effective it is.

One doctor, interviewed in Nacosa’s study, explained how councillors stepped in when they couldn’t.

“At times, we don’t have time for us to see if the patient has completed the full Pep course or has followed up on all the visits”, she said. “[The counsellors] are recording outcomes, [doing] the proper follow-up.”

The country’s current national HIV plan aims to ensure that PEP is provided to anyone who is HIV negative and may have been exposed to the virus, particularly for survivors of sexual assault. It also says that the government should conduct campaigns to raise awareness about the service — something that has also largely fallen to NGOs working at TCCs.

Whether it was accompanying victims to court even when their own families wouldn’t or providing special counselling to children, the Nacosa report found nonprofit counsellors filled a myriad of roles that government employees couldn’t give centres’ small staffs.

“I had this case, a 5-year-old girl, and she didn’t want to speak to her mother about what happened”, one counsellor told researchers. “Her mother asked me if I can speak to her in

private, so she left us.”

“We were playing house and then she told me, on that level, what had happened to her”, the counsellor explained.

“They open up more easily when you’re on their level.”

The centre was also forced to move to smaller, cheaper offices and even now is struggling to afford the R10 000 a month in rent.

Before funding cut, the centre assisted 45 victims of sexual assault every month.

But it’s outreach programme helped almost 10 times that in survivors of domestic violence every month.

The centre was also testing 250 people for HIV monthly. Over the three years the centre received Global Fund support as part of South Africa previous grant, it was able to reach almost 20 000 victims of abuse. Tshilidzi estimates the TVEP tested almost 9 000 people for HIV during this time.

South Africa’s HIV strategy commits the country to an ambitious target of testing 10-million people each year for HIV — it’s part of the national health department’s plan to test 90% of people for the virus by 2020. As of 2016, about 76% of adults in the country had tested for HIV, Yogan Pillay told Bhekisisa. Pillay is the national health department’s deputy director general for communicable and noncommunicable disease.

Today, TVEP has gone from counselling and testing hundreds monthly to seeing about 100 people in total. The funding it receives from the department of social development covers just 5% of the organisation’s annual budget.

As with previous grants, support for NGO counselling at TCCs under South Africa’s current Global Fund grant is being channelled through Nacosa and Aids Foundation of South Africa. These larger organisations will, in turn, funnel money down to smaller non-profits — and some NGOs are still in negotiations with the pair for this kind of money. Nacosa and the foundation did not say how many centres they were likely to fund in the future.

For organisations that don’t make the cut, the department of social development will likely be the only option.

Colleen Rogers is the director of LifeLine in Sasolburg, which provided counselling at the local TCC until it lost funding.

She says she tried to apply for funding from the provincial department of social development. When no one picked up the phone to answer her calls, she got into her car and drove to the department’s premises.

The offices, she says, were empty.

She was told that the department was closed because there was no water and electricity in the area.

What will it take to save counselling services at TCCs? R31-million by Nacosa and Aids Foundation of South Africa estimates.

And in truth, whether Ramaphosa can deliver on his promise is up to the provinces, which will use their own discretion in how they allocate funds, explains Lisa Vetten, a gender-based violence researcher at the University of Witwatersrand.

“Some provinces are more generous than others and some give more to [victim] empowerment than others.”

Nacosa’s study suggested that more attention be paid to the way TCCs are budgeted for under Treasury’s provincial equitable share formula, which it uses to allocate national funding to provinces. But at the very least, says Vetten, every centre should have one psychologist or social worker.

Back in Limpopo, Tshilidzi and his staff at the Thohoyandou Victim Empowerment Programme are moving furniture around in their new office. They’re not unpacking from the move, they’re trying to find places where counsellors can sleep.

Vetten says that with the previous funding, NGOs were able to pay workers more than the country’s minimum wage of R3 500 per month. At TVEP, this means some counsellors are volunteering some of their time and don’t have money to go to and from work and home.

“I don’t want to break the law by paying my staff below the minimum wage,” Tshilidzi says.

“My staff are not doing this for money. They have a passion for helping survivors.”