In part three of a series on how government entities get around procurement processes, Athandiwe Saba looks at why this is a big problem for the auditor general’s office, taxpayers and citizens

Government procurement — due process and the intricacies of various laws — can seem boring, but this is where much of the corruption that wastes billions in taxpayers’ money happens.

With the high stakes comes a team of officials from the office of the auditor general (AG), who are always on high alert. Trained to pick up discrepancies using a trove of computer-assisted audit tools, they have been working extra hard since 2009, when instances of people circumventing procurement processes started to spike. This team can easily quote regulations out of any Act and indicate that there isn’t much that still shocks them.

Auditors expose all kinds of irregularities through their work in government. This work can land them in dangerous situations. Last year the AG in KwaZulu-Natal withdrew the whole team auditing the books of the eThekwini metropolitan municipality after a series of death threats.

Irregular expenditure, according to the AG definition, means that the expenditure was in contravention of the law — either the tender was not advertised or required permission was not obtained. It can range from a town council buying pens without getting three quotations, all the way to a nuclear power plant being built after a dubious tender process.

After weeks of investigating the worrying procurement processes used by the City of Johannesburg, which enrich some big contractors, the Mail & Guardian spoke to auditors at the AG’s office about the red flags raised when people use deviations from regular procurement processes. 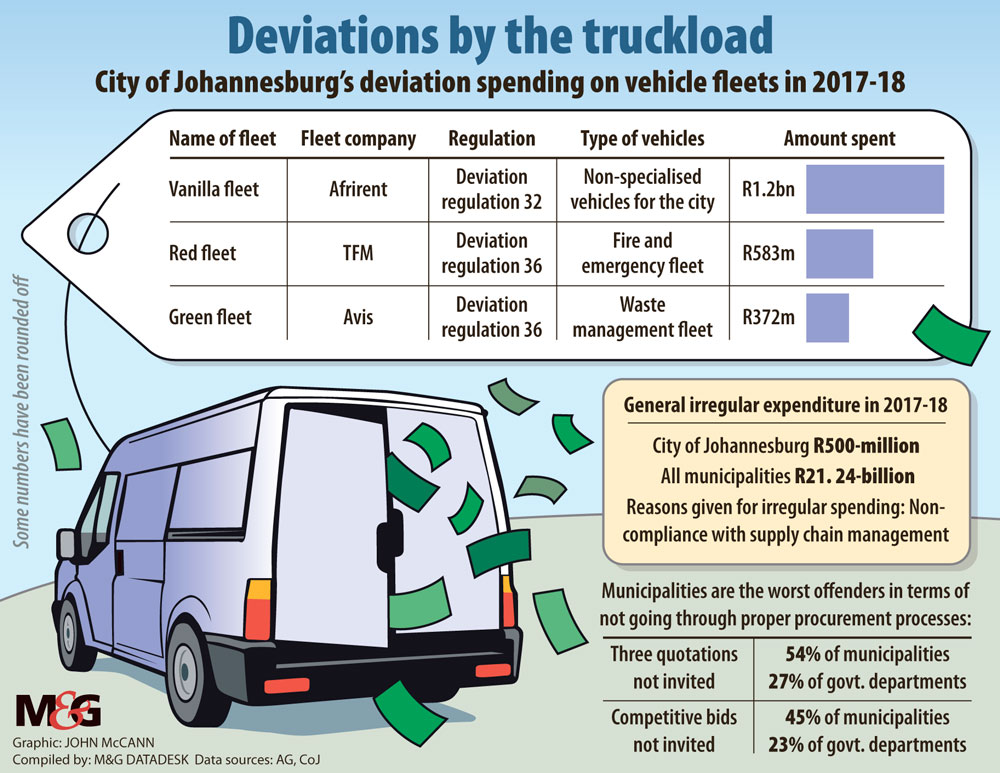 A senior auditor, sitting in a drab government office block in Pretoria, said that, since about 2009, their office started noting a very big problem in entities abusing the regulations and piggybacking on contracts done by other entities. All this happens through deviations — a process that allows contracts to be awarded to sole suppliers or in cases of an emergency without going through the regular tender process. The law on deviations is simple: deviate only in exceptional cases.

The senior auditor said: “We have the power to question why there was a need to deviate from the processes. An emergency may occur when there is a serious and unexpected situation that poses an immediate risk to health, life, a property, which calls for urgent action and there is insufficient time to call for bids.”

This is often not the case, though.

The M&G reported two weeks ago on the results of analysing 80 contracts that the City of Johannesburg had awarded over five years. The contracts, worth about R3.9-billion, were recommended to bypass the regular tender process. This included three of the city’s biggest fleet contracts. In one case, the deviation was signed off, despite the previous contract having lapsed two years before — meaning there was plenty of time for due process to be followed.

Though the AG’s office would not be drawn into the specific cases of the City of Johannesburg, the auditor in Pretoria did note that many of the emergencies cited by state entities are self-inflicted.

“If I am running an organisation, I have my strategic objectives and goals to achieve [and] I need to do proper planning to meet my goals. There is an annual procurement plan that entities must follow. This is prescribed by treasury. We ask the question: ‘What did the entity do to ensure that when the contract comes to an end there is a replacement supplier ready?’”

When it comes to procurement, the audit teams go through a rigorous risk-assessment process before even selecting the cases they are going to test. This is a process that includes understanding the entity so that the auditors can more easily pick up what is outside of the norm.

How the entity goes about ensuring services are rendered is important, the auditor added. Without going through the proper tender process, the public will not know if the price was the most cost-effective. As has been seen in many municipalities, it also means less money for critical services such as adequate water and sanitation.

The scale of corruption, which is increasingly being revealed by the Zondo commission of inquiry into state capture, often seems overwhelming. But the AG’s office has now been given significant new powers to enforce the laws that already allow for accounting officers to be held accountable. For example, losses can be recovered from municipal managers and director generals who oversaw deviations and other irregularities.

These new powers will allow the AG to build on existing successes.

The auditor said: “I must note that the areas that we have rigorously focused on, such as conflicts of interest, have shown a drastic reduction. A lot of people have been dismissed from their workplace.”

With consequences, people start to change their behaviour, he said. “When we identify issues and there is action taken, it starts to address the behaviour.”

Deviations are now the place where action is being taken.

Just a few examples of dodging due process

Arrogant, out-of-touch ANC is not accountable to the people