Behind the glitz and glamour of the Vita Basadi awards are the unsung heroines, community builders, leaders and philanthropists who push for freedom, are courageous and break gender stereotypes.

The awards take place every Women’s Month and are championed by the Gauteng provincial legislature’s multiparty women’s caucus. Through these awards, the legislature recognises women who use their determination and skills to empower others without demanding compensation.

As with all celebrations, music, good food and gifts were in the mix. The tables were elegantly decorated with touches of pink, white and gold reflecting the arrangements of fresh roses. Women were pampered with a gift bag and the likes of Loyiso Bala and Ayanda Jiya serenaded them. Invitations to the event were sent to 450 people from all over Gauteng.

Ntombi Mekgwe, the founder of Vita Basadi and speaker of the legislature, told the Mail & Guardian that the awards are important because women have been in the forefront of the fight to change the lives of people. She said that fight started a long time ago. “If I say long time ago, you know the story of Queen Modjadji and of Princess Mkabayi, who was Shaka Zulu’s aunt.” ebaQulusini

Mekgwe said that Shaka was the visible leader of the Zulus but behind him was the invisible power behind the throne. Mkabayi, she said, was the person who told Shaka when to “attack”. If she told him not to and he defied her, he never won the battle. So “she was a strategist” and played a crucial role “despite being a woman who lived in yesteryears”.

“These women are the unsung heroines of the times. Therefore, it is important to realise that as we celebrate the women of today, in a way we are celebrating the efforts of those women who were there before,” Mekgwe added.

But she says that even if women fought to get where they are today, the struggle to emancipate women still continues. And those who are outstanding need to be recognised. “It’s our time, it’s our day,” she said.

The awards fall into eight categories and nominees, of which there were 1 031, were solicited from the public in various ways such as advertisements in newspapers and through the legislature’s website.

The Outstanding Creative award, for which there were 75 nominees, was won by Lebogang Monyatsi, the founder of Miss Wheelchair South Africa. She advocates for the inclusion of people with disabilities. She became Africa’s first runway model on a wheelchair and crowned first princess of the first-ever Miss Wheelchair World, which was held in 2017 in Poland.

Monyatsi says she is motivated by people with disabilities. “We have been disregarded for a very long time. They keep me going, they encourage me to keep working hard so that I can be a good role model to them.” 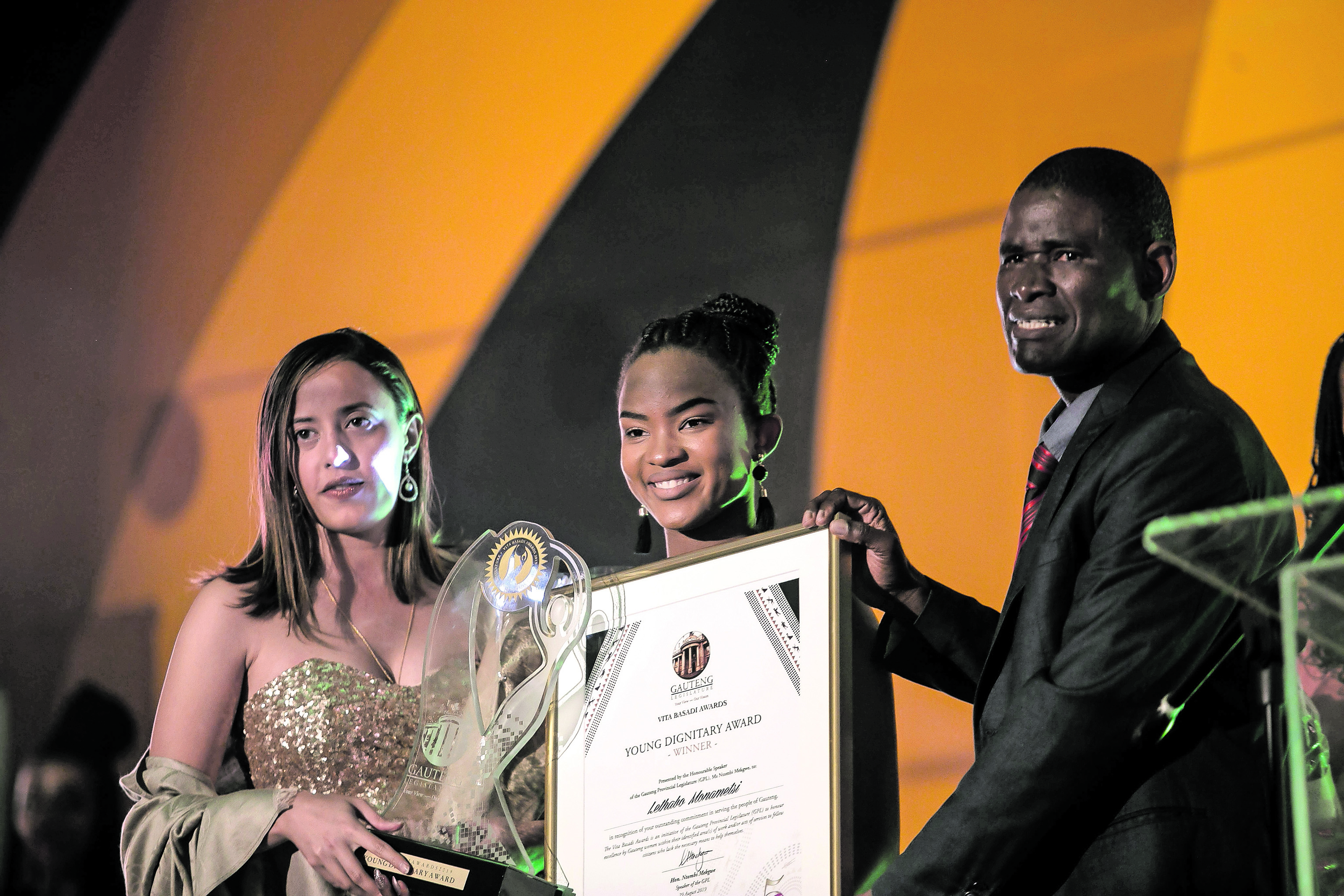 The Youth Philanthropist award, which received 255 nominees, was won by Lungako Magida. She’s the founder of the Lungako Magida Foundation, which co-ordinates a national education pageant, Miss Tertiary SA, for women aged between 18 and 35. The pageant aims to help address the financial struggles of students by giving scholarships to pageant winners. She employs youths from the age of 22 and has launched a lifestyle magazine, Journey, which is sold at CNA, Checkers and Engine garages.

The Unsung Legend award, which received 30 nominations, was given Maria Diamond, who with her husband John is the founder of the Diamond Athletics Club based in Germiston, which has more than 80 children. Children have received bursaries for university and to go overseas. She believes that people can make a career out of athletics and “her children” have represented South Africa internationally.

The Community Builder of the Year received 130 nominations and the award went to Kgomotso Nyalunga. She is the founder of the Kgomotso Children Centre, which provides a haven for children and ensures their basic and learning needs are met. She’s also the founder and director of the Tshwane Ladies Forum, which offers psychological support to rape and abuse victims. Programmes include, psychosocial wellbeing, arts and culture and skills development.

The Woman of Honour award, which received 189 nominations, went to Stacey Lee May. She has been in the extreme sport of car drifting since the age of 16. She has always wanted to correct the stereotype that this sport is reserved for men — particularly thugs. She started car drifting because she was bullied a lot in high school and her father thought the sport would boost her confidence. May says her confidence is now “out of this world”. She has been interviewed on Carte Blanche and has been invited by actress Charlize Theron to compete in the United States. May participates in many community-based programmes and runs campaigns against drug abuse and alcoholism in Eldorado Park. She stands for integrity and says “you should always be honest and faithful to yourself”. Her peers keep her going. “I love inspiring the youth and inspiring females to conquer their goals and become something greater in life,” she said.

The Young Dignitary award received 107 nominations and went to Lethabo Monametsi, who is gifted in academics and dance. She has demonstrated sharp leadership skills and this has earned her much respect from her educators and peers. She has been voted for three consecutive terms as head prefect at the Tebogo Kgobokoe Arts Academy and has a long list of achievements and accolades in various genres of dance. Monametsi says being raised by a single parent allowed her to see that independent streak in her mother which awakened the leader in her. She says the country needs “more people who are able to lead people in the same age group and I think that is one thing that has motivated me. It’s okay to look at the Steve Jobs of this world, but if you do not have anyone in your age group is really harder to relate.”

The Community Heroine award, for which there were 130 nominations, went to Bathabile Moreki. She is the deputy chairperson of the Olievenhoutbosch Business Forum and is a research associate at the University of Johannesburg. Moreki has mentored more than 800 young business owners and helped them secure funding. She also hosted many businesses at the Proudly SA Expo 2019 and was selected as one of the 100 Women of Fortitude for Mama Sisulu Centenary in 2018 and was the National Development Plan ambassador in 2017.

The Guardian award received four nominations and went to Sergeant Lerato Mngomezulu.She leads a local action drug campaign, Intomb’ezibhekile, an initiative for girls in primary schools. She also leads Let’s Make Tsakane Better, a programme that addresses substance abuse, bullying, gangsterism (among boys) and supplies girls with sanitary towels. Mngomezulu also partners with many people and organisations in the fight against drug abuse and has helped users to attend Sanca programmes which deal with alcoholism and drug dependence

This is the fifth year the awards have been held. Mekgwe said she wants to see the event expand and fill up bigger venues like the FNB Stadium or the Dome. “We are driving towards that — you can see today even the seating arrangement had to be rearranged because more and more women are being nominated and more people know about this event,” said Mekgwe.

She said the event shows that women uplift each other. “We want to prove that ‘I am a women, these women are doing wonders in our communities, let us lift them up’. Let us say ‘I am because you are’.”

From data must fall to data for all