‘We will have to begin from zero’

Six months after Mozambique was hit by cyclones Idai and Kenneth, recovery is far from complete. And for poorer countries, reconstruction efforts face additional challenges in terms of implementation

Tendai Marima in Buzi and Macomia

Elnina Francisco was nine months pregnant when Cyclone Idai swept over the hospital where she was due to give birth, peeling off its tin roof and sending flood waters thundering in to destroy whatever was left.

The storm flattened her family home too, and Francisco (22) wondered if it would take her child next.

“I was scared I’d lose my baby because the floods had destroyed so much,” she said.

But she didn’t. Only a few days later, in a tarpaulin-tented health centre, metres from the ruins of the Buzi District Hospital, Francisco gave birth by caesarean to a healthy baby girl. “I thank God I didn’t lose her,” she says.

When Cyclone Idai pummelled Mozambique, Zimbabwe and Malawi in March, its destruction was indiscriminate. Entire villages were submerged. About 780 000 hectares of fields of nearly ripe crops drowned. Beira — a port city of half a million people — buckled, with the Red Cross estimating that the storm had flattened 90% of the city. 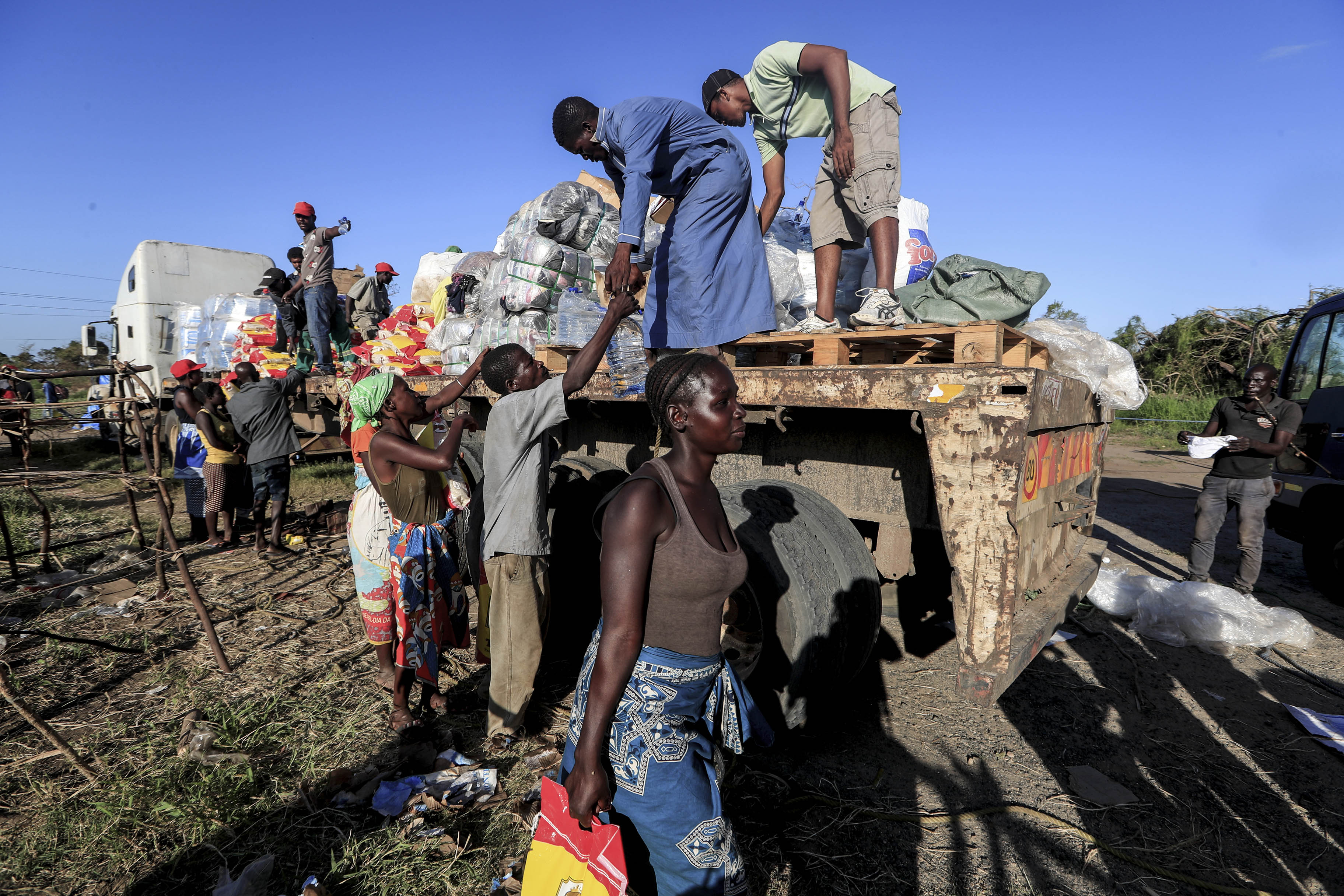 Rebuilding their lives: Maria Jofresse (centre) carries aid packages at a camp for the displaced in John Segredo, near Beira. Jofresse lost her two children to the storm. ‘People suffered indeed but no one suffered as I did because I lost the most precious things I had — my kids,’ she says. (Zohra Bensemra/Reuters)

All across the region, health facilities disappeared under water, emerging unusable or destroyed. The World Health Organisation (WHO) estimates that more than $200-million will be required for the long-term repairs to nearly 100 health centres in Mozambique alone, according to a report released at the end of May.

In the meantime, many here, like Francisco, are relying on emergency health centres to plug the gap. The temporary clinics are provided by international nongovernmental organisations (NGOs) and United Nations agencies and are meant to be a stop-gap — offering both disaster assistance and primary care — until brick-and-mortar hospitals and clinics can be rebuilt.

But now, as agencies scale back their emergency operations in central Mozambique and some pull out of the poorer northern coast — which was pounded by another powerful storm, Cyclone Kenneth, in late April — concerns about how Mozambique’s health system will recover in the long term are growing. At a donor conference recently held for Mozambique, the country requested $3.2-billion to recover from both tropical cyclones, but received pledges of only $1.2-billion, leaving the UN’s appeal less than 40% funded.

For health officials, recovery is an especially urgent matter. Build back efficiently, they say, and the country could do more than simply reconstruct its creaky health system — it could significantly improve it, and potentially emerge from decades of bottom-of-the-charts ratings on many major health indicators.

But that kind of rebuilding will require more than just a few emergency field hospitals. It will need a government and an international community willing to keep watch over the reconstruction long after the crisis has disappeared from the headlines.

If history is a guide, such a strong response can be extremely difficult to maintain. In the aftermath of a major earthquake in Haiti in January 2010, for instance, field hospitals sprung up across the disaster zone, and international donors pledged more than $300-million to rebuild the health system.

READ MORE: Haiti quake: Facing life after so many deaths

But five years later, some major health facilities — including the country’s only teaching and referral hospital — still hadn’t been completed. And the brain drain of medical personnel, already a problem before the disaster, accelerated, leaving many of the facilities that were working understaffed.

In Haiti, as in many disaster zones, one of the core problems was that donors scrambled to give humanitarian aid immediately after the disaster, but were far slower to open their wallets for long-term recovery funding. Five years later, only a third of the recovery aid pledged to Haiti had been paid. 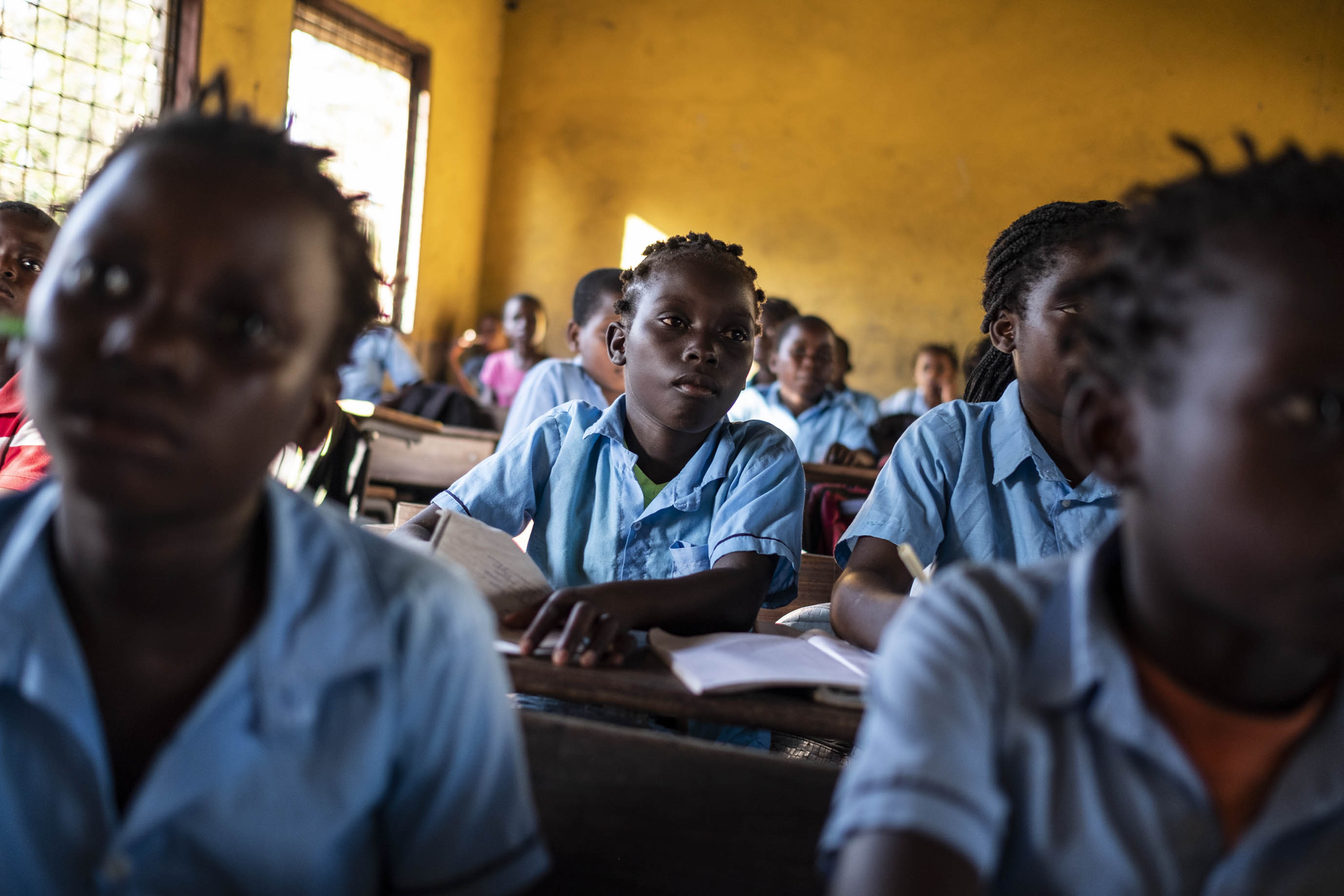 That raises the risk that emergency interventions such as field hospitals will end up providing a standard of care too high for local health centres to maintain after they’re gone. In its guidelines for emergency field hospitals, the WHO cautions that “the quality and sophistication of the care provided by the [foreign field hospital] must be sustainable by the local health services… Short-lived availability of higher technological care (diagnosis, medicines, et cetera) often raises unrealistic expectations from the population and leaves the local health services in a weakened position.”

In Buzi, Samaritan’s Purse, an American NGO that set up the field hospital, says it was asked “to match and mirror the services the hospital offered before the disaster so it’s a smooth handover and a sustainable transition after we pull out”, says Kelly Suter, a nurse who is a clinical manager with the organisation.

Today, construction hums and whirs on the site of the Buzi hospital. Although local officials hope it will be open again by August, it is far from complete. Broken equipment, from scales and gurneys to wheelchairs, lies slumped on the building’s foundations, while stacks of water-logged patient records crowd the courtyards.

In the meantime, the field hospital has been handed over to district authorities in an effort to help get the district’s health service back on track. Samaritan’s Purse has left behind only a few health workers and a tranche of medical supplies, in line with the WHO guidelines demanding that groups providing field hospitals must also provide for their maintenance until they are no longer needed. 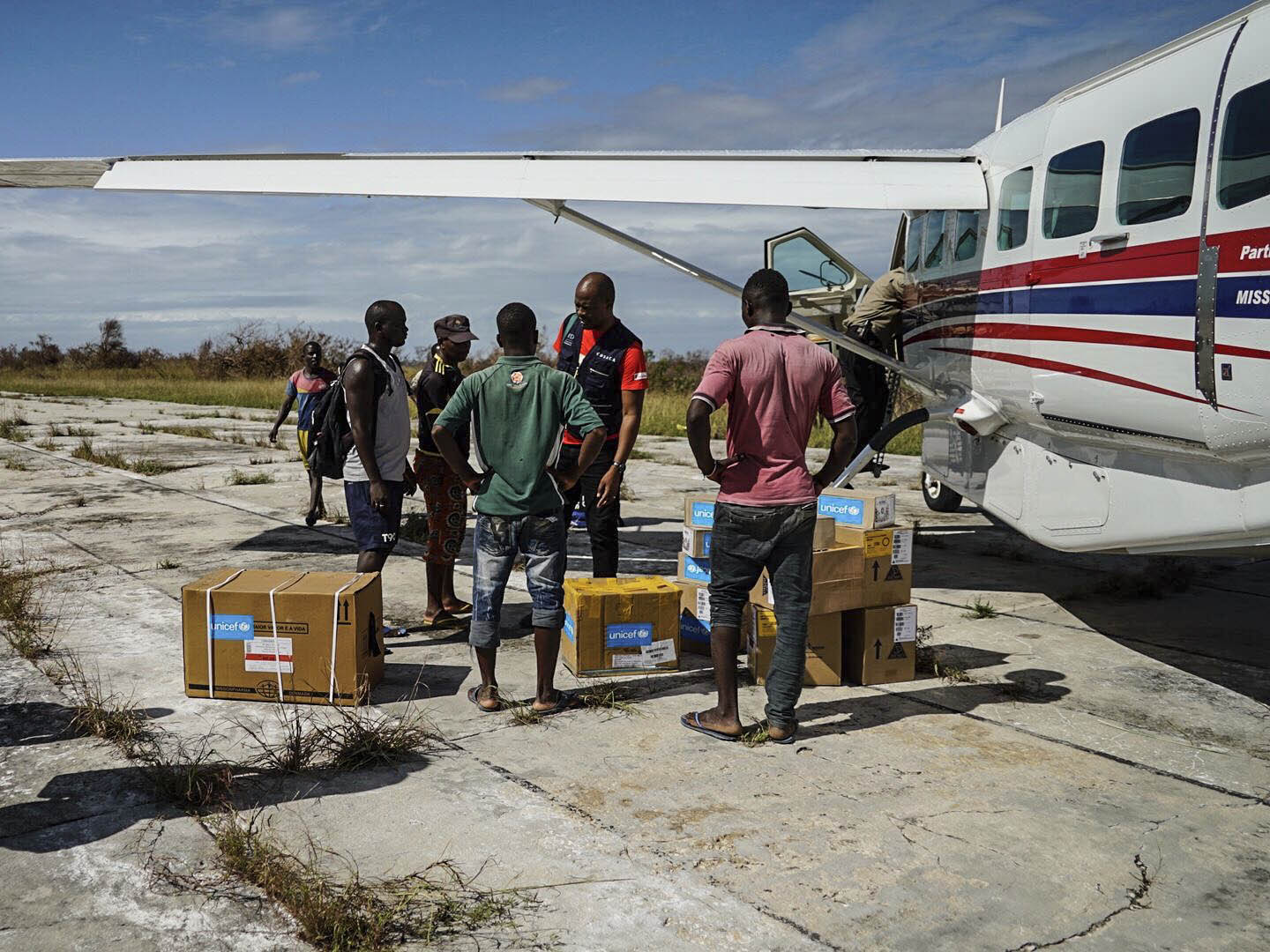 The human cost: Medical kits being transported via plane to Ibo Island, Mozambique, which was one of the areas hardest hit by Cyclone Kenneth. (Pesce Blazqu/Unicef)

“We were in a difficult situation, but our partners helped us with the hospital,” says Chris Alberto, the chief medical officer of Buzi district. “Help has come and our lives can work regularly; we are stabilising and have partially resolved our problems.”

But many problems remain. Since Cyclone Idai, there have been outbreaks of malaria and cholera and concerns about tuberculosis, all exacerbated by the destruction of so many health facilities. Although the tented hospital has helped to serve a rural population of more than 5 000 people, some things can never be recovered — among them many of the facility’s patient records, which were either written by hand or stored on computers destroyed by the storm.

“We have no way to get the information back; we will have to begin from zero,” Alberto says.

Further north, where Cyclone Kenneth struck, the situation is equally dire. The storm damaged or destroyed at least 19 health centres and left nearly 400 000 people in need of humanitarian assistance. Here too, emergency field hospitals run by international agencies have stepped into the breach.

The UN Population Fund, for instance, has set up 20 temporary reproductive health facilities in tents across Cabo Delgado and Nampula provinces.

Initially, the tented facilities were to be used for three months but, according to reports from the health cluster, a collection of international agencies in partnership with the Mozambican ministry of health, some facilities will probably be used for longer because of broader problems. Bridges in some areas are still damaged, for instance, making it difficult to reach and repair some remote health centres, and an ongoing violent insurgency in Cabo Delgado poses security risks.

That is particularly troubling given how few health workers Mozambique had even before the storms. Countrywide, there are only three doctors for every 100 000 people and in Macomia, a town 180km north of Pemba, the hospital is in need of more medical hands on deck. The maternal ward was destroyed and a temporary unit was set up, but staffing remains a major problem. 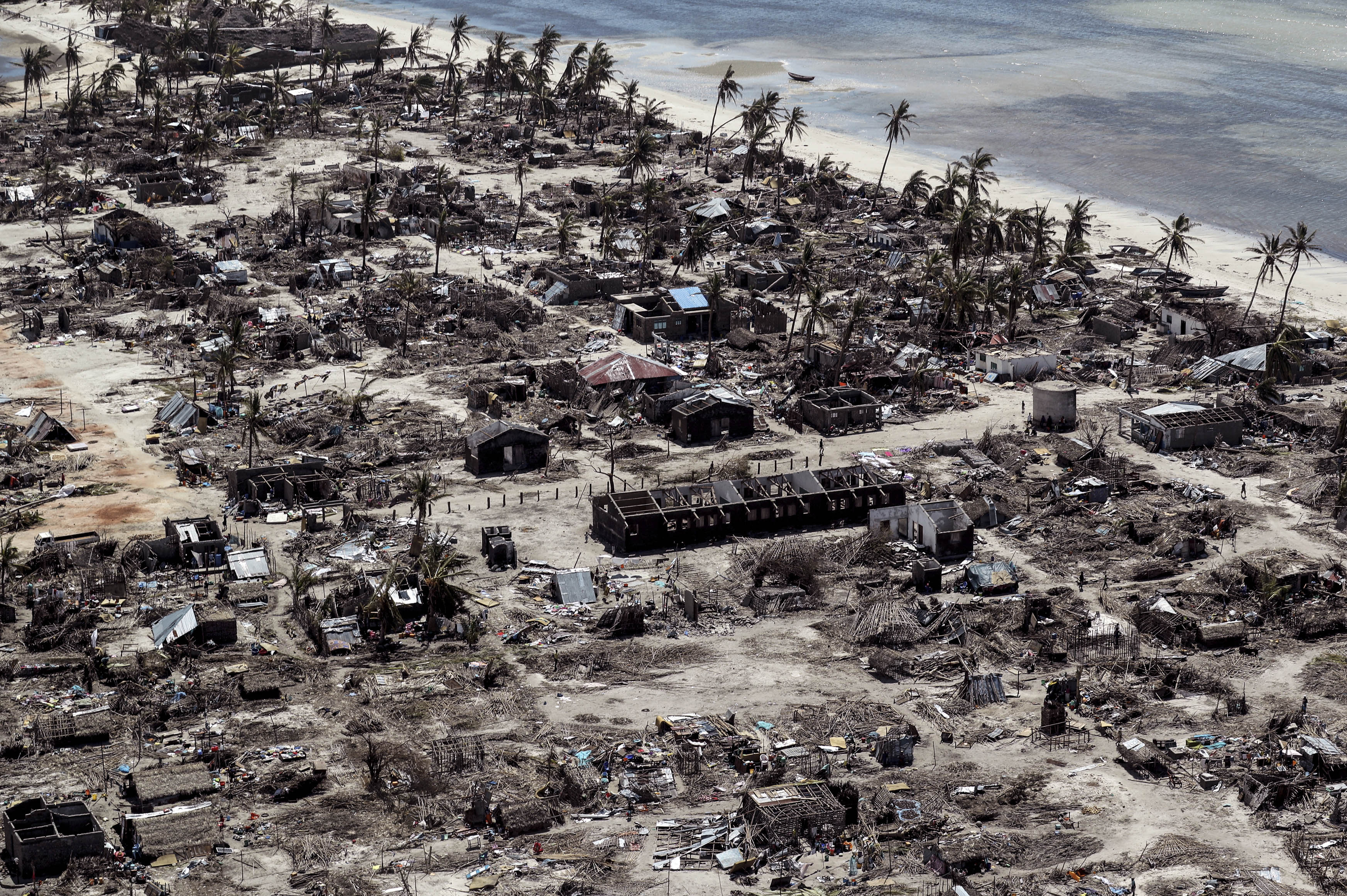 Buildings damaged during Cyclone Kenneth are seen from the air in a village north of Pemba, Mozambique. Since the cyclones struck, there have been outbreaks of malaria and cholera and concerns about tuberculosis, all exacerbated by the destruction of so many health facilities. (Mike Hutchings/Reuters)

Maria da Silva is one of only two doctors permanently based at the district hospital, which serves more than 12 000 people. There, she is supported by a team of midwives and tecnicos, health workers trained to perform specific surgeries when a surgeon is unavailable.

But since the cyclone, despite help from temporary UN Population Fund staff and doctors from the health ministry, Da Silva’s days have been even longer and more demanding than usual, with little time to spare between rounds in the maternal and casualty sections of the damaged hospital.

“In a day I see so many people with different needs, maybe 50 patients might need my attention. It’s better nowadays with the support we have, but people are constantly in need of my help and I’m the only specialist that’s here [permanently],” she said. When the UN support scales down, she wonders how she will cope.

For now though, with the extra support from the UN, Macomia hospital is shifting out of crisis mode into recovery. But, as reconstruction work gets under way more than 1 000km away in Buzi and the larger Beira hospital whose maternal ward was also damaged by Cyclone Idai, Mozambique’s gradual recovery from the effect of the two cyclones still depends heavily on continued backing from the international community.

It also depends on what the country does with its grimly created clean slate — just build back what was there before, or create something new and better from the rubble.