It’s a long drive to Maun from Johannesburg. The distance is only 1 250km, but it’s unwise to drive in the dark in Botswana, as the roads are full of cows, donkeys, goats and sheep. In all, our trip took more than 15 hours.

Botswana is hot, flat and, aside from millions of scrubby thorn bushes, practically featureless. To keep ourselves from going nuts while crossing this terrain we tried playing “eye spy” but there was very little to keep the game participants guessing. Tour operators en route through the middle of the country (via Serowe) must find innovative ways to keep their clients entertained. Luckily we found odd adverts in the occasional towns to keep us amused, such as Low, Low Butchery; Brick Chicks and F#kKom Ons Braai.

I had neglected to print a map, and none of our phones worked because we had crossed that mythical and expensive line called a “border” so, at our first town, we dutifully bought a local SIM card. Oddly enough, this didn’t function either. We had to rely on directions I had written in my diary and, as my handwriting is worse than most doctors’, this was far from simple. 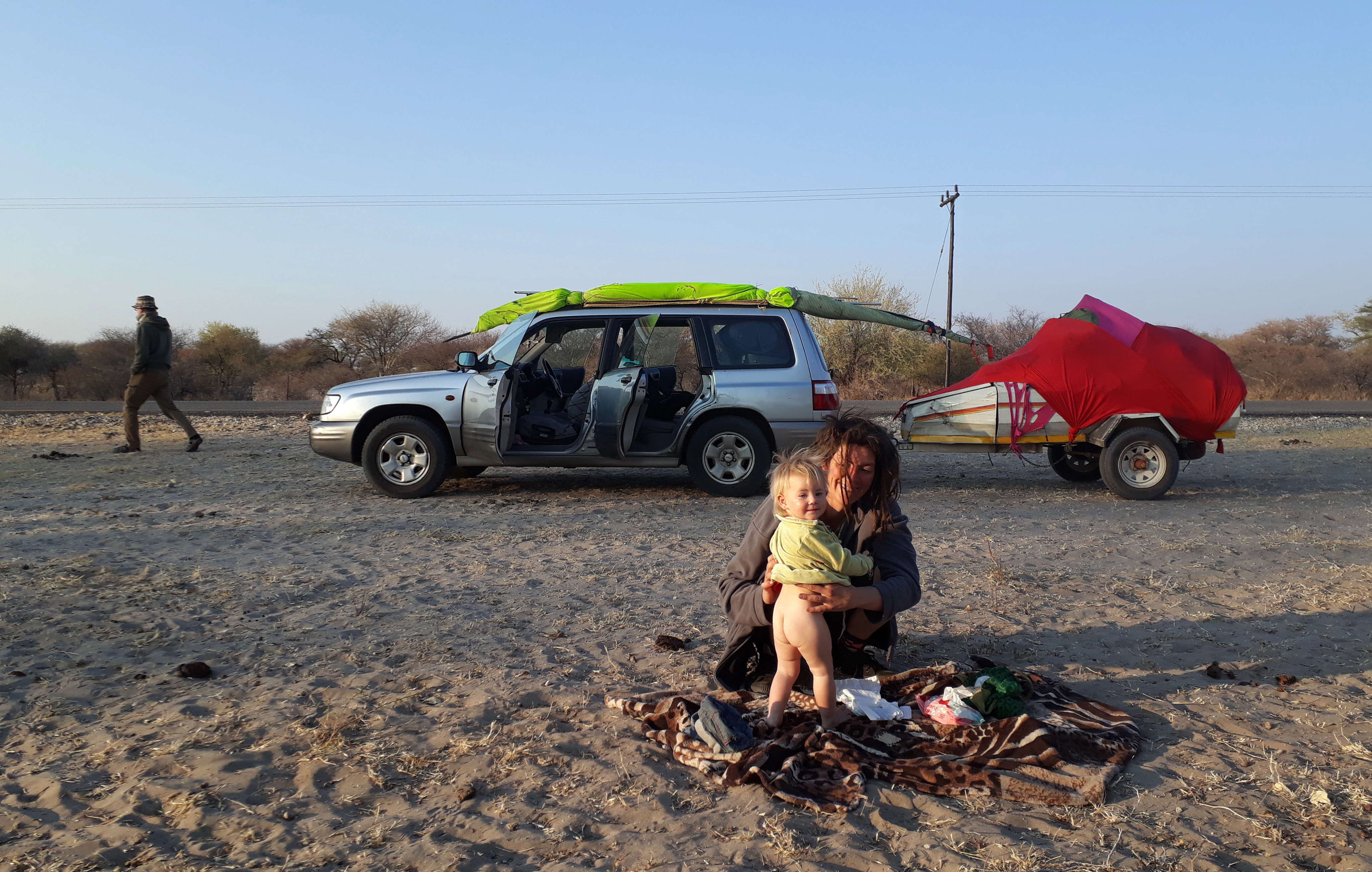 Travelling with a circus (and a baby) through a hot, flat country comes with it’s own unique challenges. (Photo: Derek Davey)

To make matters worse, there were no sign posts anywhere. Seriously. When we finally reached Maun, we discovered why: the council has elected to charge people to erect signs, so most businesses simply do without them. Due to this oddity we ended up meeting a lot of Batswana, who were very friendly and so, with a few minor detours, we found our way eventually to Maun (pronounced Ma-oon).

We arrived exhausted, just as the sun set, and found ourselves in a traffic jam. The country’s tourist capital has grown considerably since I last visited 10 years ago, and now has more than 50 000 residents, one of Africa’s busiest airports and its very own rush hour. It only took five or six stops to establish where the Old Bridge Backpackers was. After drinks and food we collapsed in grateful comfort. No wonder most tourists fly into this town.

At breakfast we overlooked a pool with hippos and crocodiles while the late great Oliver Mtukudzi played over the bar speakers, interrupted by fish eagles’ cries. The Dub Loons, our pirate band, had a great gig that night with local musicians Maf Sheldon and Stigga Sola, and our set was transformed when our host Helene Forward joined us on violin. 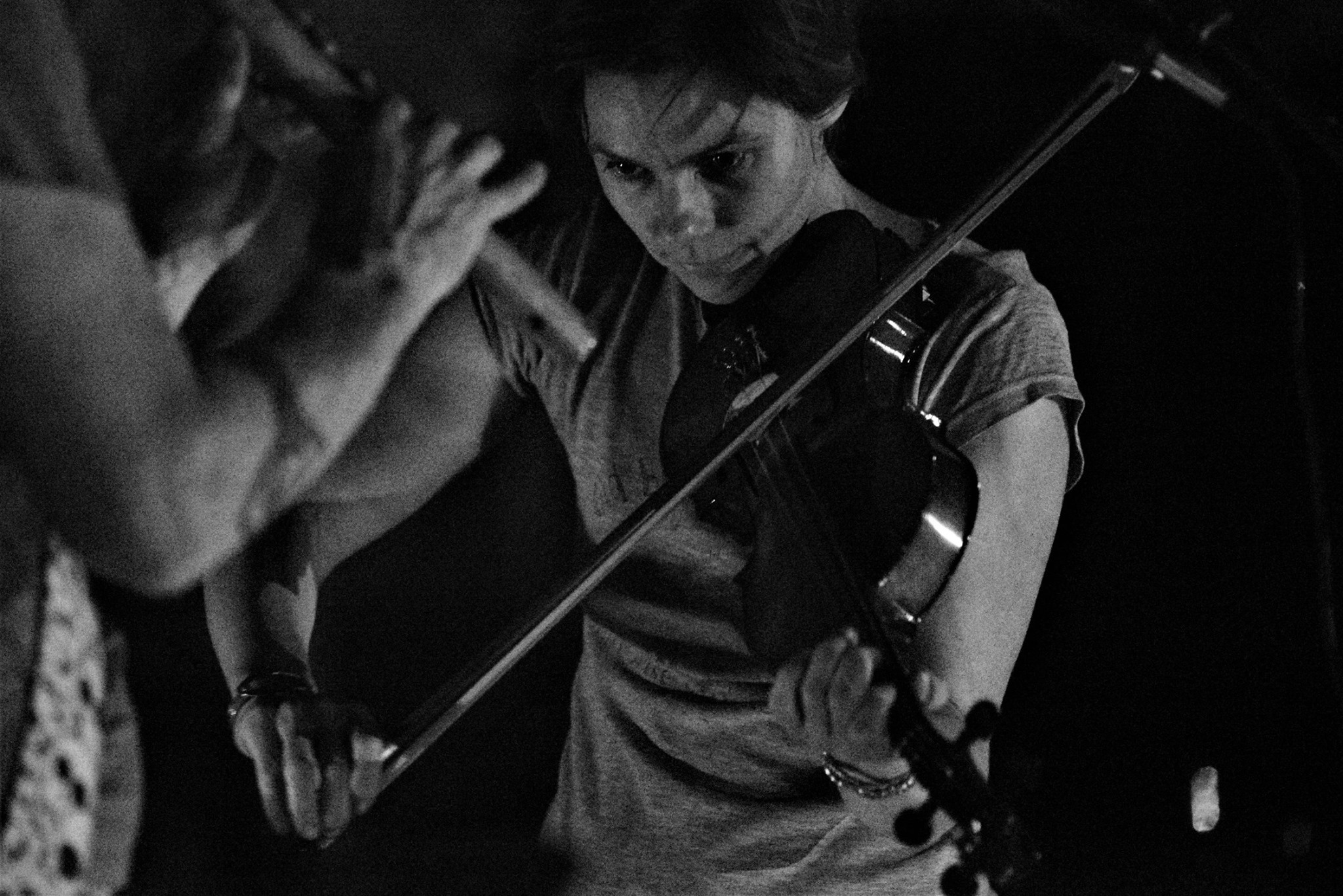 Helene Forward gets a taste of pirate music on the banks of Maun’s Thamalakane river. (Photo: Jonathon Rees)

The hippos in the pool below The Bridge, in the bed of the Thamalakane River that flows through Maun’s centre, were in the process of being moved: there’s no food left for them. Botswana, ever arid, is experiencing a devastating drought. At the festival I met people from Zambia, Zimbabwe, Namibia and Botswana (Maun seems to be a central gathering point for folk from these countries) and they were all, without exception, talking about how climate change is affecting them. According to the Water Research Commission, Southern Africa is the worst-hit region in the world, warming at about twice the world average.

Last year the festival was held on a remote island in the bush, surrounded by water — on which floated beautiful water lilies, according to previous festival-goers. This year there were just dry, dusty pans. In high flood years the waters of the Okavango Delta reach this area and Maun in a miraculous process of inland river flows. 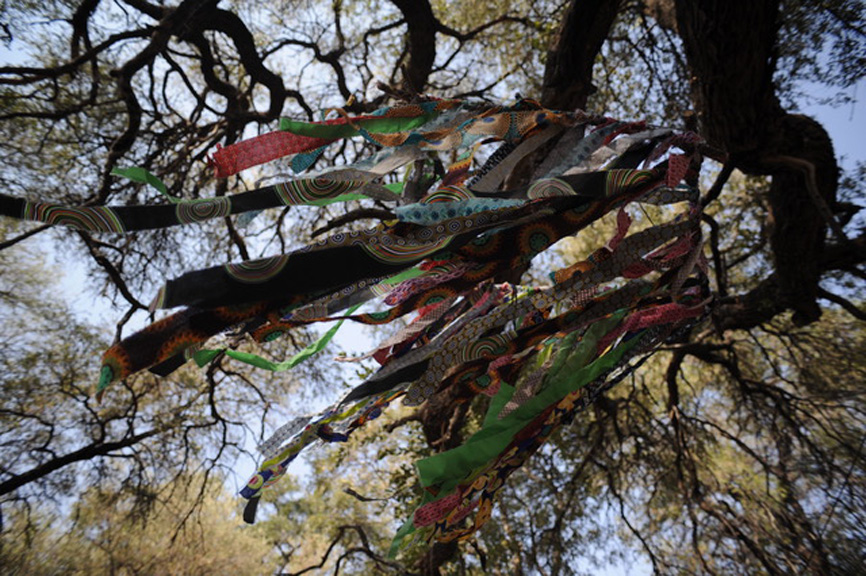 The festival is held on an island in the Okavango Delta, partially shaded by thorn trees. (Photo: Henry Smith)

There was the advantage for this year’s revellers that they could walk out on to the pans to do fire-dancing or to see the bush. The disadvantage was that the air — and soon your clothes, hair and personal items — was thick with dust. It was so dense that at night, the beam of your torch looked as if it was shining through a snowstorm.

“I don’t think people go to a festival for a clean experience — people expect to get basic and dirty and dusty,” said festival organiser Sophie Dandridge. “It is dusty with no water, but so is AfrikaBurn.” The lack of water did not affect attendance. Dandridge said that numbers were double compared to last year’s festival, when there was water. It’s only the second time that the Okavango Delta Music Festival has been held.

It’s certainly a remote venue, one where everything — including water — has to be ferried in by vehicles capable of handling deeply rutted, sandy tracks. With such huge logistical problems there were inevitably glitches: the main generator failed repeatedly on the Friday night, and the ecofriendly plan of everyone bringing their own cutlery and crockery was shelved in favour of paper plates and plastic beer mugs. 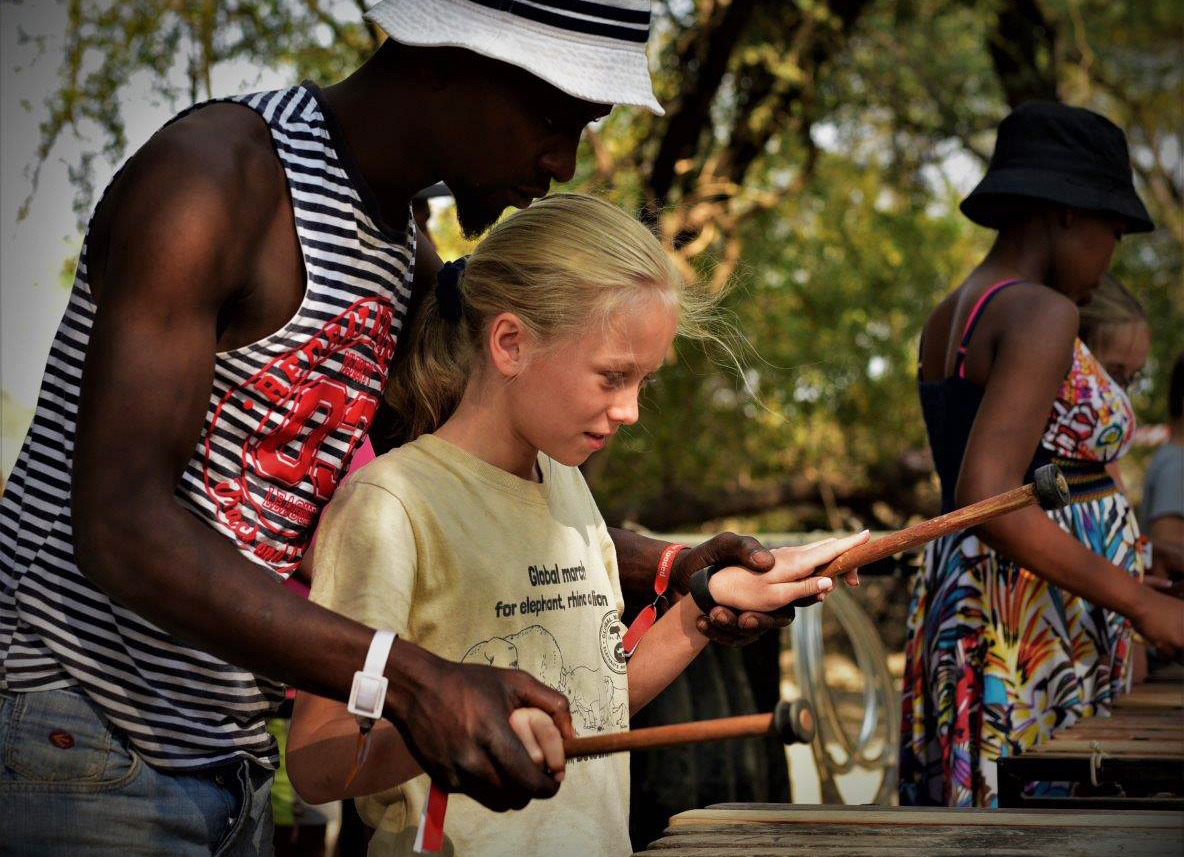 “Festivals will always have teething problems in a new area as remote as this in only their second year: it is impossible to run an event of that size [smoothly] , in such a remote location, with unskilled community labour, no facilities, no awareness of that type of event, no tarred roads, and with no budget — the festival was funded from the personal pockets of the organisers as ticket sales managed to cover only 40% of the actual costs,” Dandridge said.

The flamboyant festival organiser (she was wearing a Native American feather headdress when we arrived) directed us to our sleeping quarters, which were pleasantly surprising. Our canvas tents were pitched beneath the thorn trees scattered around the edge of the island, each with our names attached to them. The staff at our campsite, which was called Delta Rain, guarded our belongings 24-7 and kept us supplied with water and firewood. There was also a shower, a boma tent, chairs and a table. Styling.

Our contingent of friends who had driven up in their 4x4s set up camp near us, and every night we could watch stunning sunsets, escape the hubbub of the festival and chat around fires, under clear African skies and the Milky Way.

Our campsite was filled with Zimbabwean musicians from the bands The McKay.z, Evicted, So Kindly, Djembe Monks and Flying Bantu. These bands stole the show, though I also loved the performances of South Africa’s Bongeziwe Mabandla. Local band Goddy & 100% Africa was joined by rows of enthusiastic dancers who came walking across the pans from distant villages as the sun set on the final day of the festival.

I came up with three acts. I played drums with the marimba band Achikids at their 9am slot each morning; helped to carry gigantic worms and birds through the crowd with BDI circus; and sang lusty Irish ditties with the Dub Loons. I’m not sure if the Maun crowd got our pirate band thing, but … we were a long way from the sea. The Achikids appeared to enjoy the experience, and some said they met people from as far afield as Mozambique. 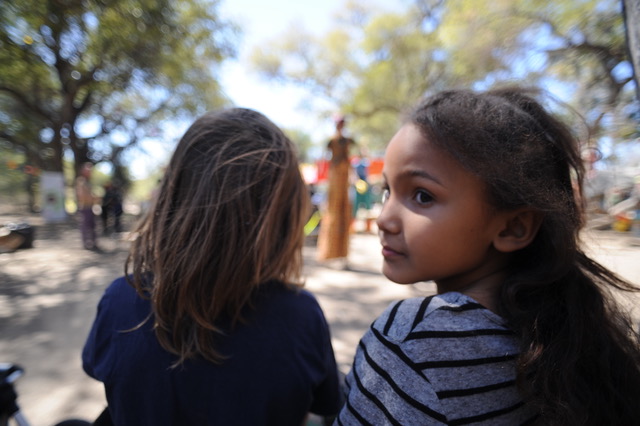 The festival is a safe space for children. Photo: Henry Smith

Watching the little gangs of children and dogs come and go among the adult revellers, I suddenly got what this festival is about: space. There’s enough room on the island for people to move around and dance freely, it’s all outdoors, and it’s all safe, so parents don’t have to worry if their kids have disappeared for half an hour. If you have a 4×4 and you want to party in nature without thousands of people and the commercial headache that bigger festivals have become, the Okavango Delta Music Festival is the destination for you.

Dandrige said the idea behind the festival is to offer an alternative to wildlife tourism and provide training and an income for an impoverished community. She said that 220 locals were trained and employed by the festival, and a borehole was sunk for the nearby Tsutsubega community. 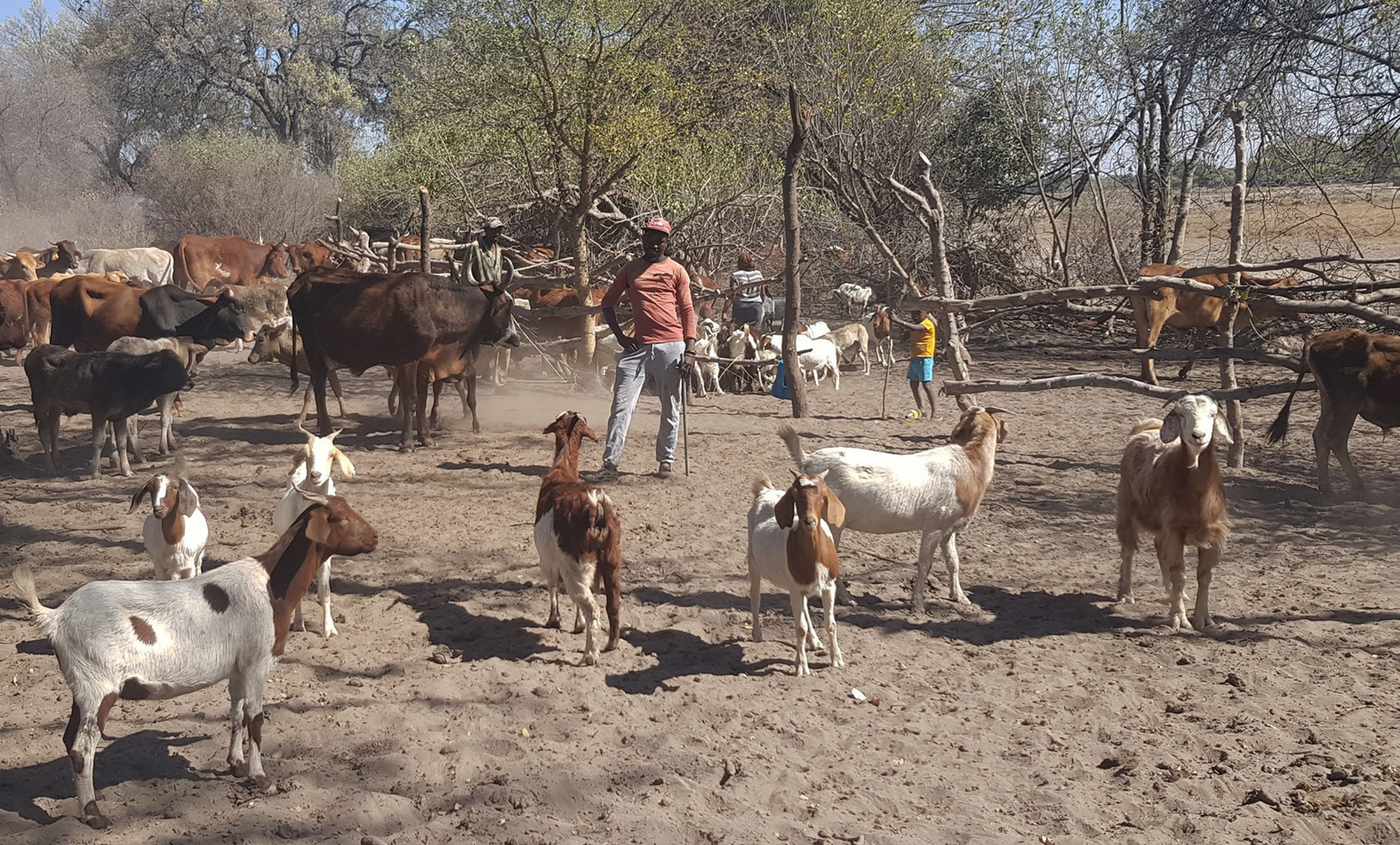 Villagers close to the festival benefited from its presence

There was certainly a lot of support from local businesses. There were sponsored flights for the Zimbabwean bands, and sponsors also provided the card machines, Wi-Fi, public liability insurance and tents. A couple of the bigger acts got choppered in, and some even had safaris in the delta laid on for them.

Will there be a third festival? “It is too soon to decide if we will hold another festival next year,” said Dandridge. “We need to weigh up the financial losses for the second year against the benefits to the wider Maun community and to the country’s tourism, as well as the benefits to the local community. It is something we will be discussing with the Botswana government in due course, and we will make a decision with them when the time is right.”