After 45 years, Africa has a new tallest building

At first, Bart Dorrestein did not intend to build the tallest building in Africa. Initial plans for the Leonardo, in Johannesburg’s upmarket Sandton district, envisaged just 33 storeys of high-end shops, offices and apartments. When those started selling well, the developers — Legacy Holdings, of which he is the chief executive, and Nedbank — added a few more floors to the design. Then someone suggested incorporating an eight-storey luxury hotel, and suddenly the building was 234m tall.

That is 11m taller than the Carlton Centre in central Johannesburg, which for 45 years had gone unchallenged as the “Top of Africa”. That slogan is plastered on signs in and around the Carlton Centre, but it is going to have to change. This year, after four years of construction, costing an estimated R3-billion, the Leonardo was officially certified by the Council on Tall Buildings and Urban Habitat as Africa’s tallest building. Even this is not very tall by international standards: the world’s tallest building, the Burj Khalifa in Dubai, is 830m high.

Dorrestein gave the Mail & Guardian a tour, prior to the official opening that is tentatively planned for early November. The R3-billion building is located in Sandton, which likes to call itself — not inaccurately — the “richest square mile in Africa”. And it is undeniably impressive, aimed squarely at Africa’s superrich: from the marble-clad lobby, decorated with custom artwork, to the ultra-luxurious three-storey penthouse on the top floors — complete with professional kitchen, infinity pool and 1 100m2. The penthouse, called the Leonardo Suite, “has redefined the opulent sophistication of modern African luxury lifestyle living”, according to a breathless press release.

Dorrestein will not divulge the cost of the penthouse suite, nor the identity of the prospective owner, except to confirm that the person is an African. A one-bedroom residential unit is going for a minimum of R3.5-million. Of the 240 residential units available, 228 have already been sold. With in-house restaurants, bars, shops, a swimming pool, a gym and a preprimary school, the complex is designed to meet its wealthy residents’ every need. “You never have to leave the building,” said Dorrestein.

There are remarkably few skyscrapers on the African continent. According to research by Kheir al-Kodmany at the University of Illinois, in Africa there are just 182 tall buildings (defined as buildings of 200m or more). In North America, that figure stands at 5 577; even Australasia, with its comparatively tiny population, boasts 938 tall buildings.

It was not always this way. For millennia, the tallest building in the world was in Africa: the Great Pyramid of Giza, built in the third century BCE and not surpassed until the Lincoln Cathedral was completed in 1300. Since then, however, Africa has languished far behind in the skyscraper stakes.

That’s because African cities tend to expand outwards rather than upwards. As Astrid Haas, a cities researcher with the International Growth Centre, an economic research unite based at the London School of Economics, observed in a report for CityLab: “At the centre of a major African capital city like Kampala — where you would find skyscrapers in New York City — it is not uncommon to find a farmer tending to his plot of maize … [African cities] are exemplified by low-rise buildings and great urban sprawl. Vacant land at the centre of the city is not being put to its most productive use. In Harare, Zimbabwe, or Maputo, Mozambique, for example, more than 30% of the land within [5km] of the central business district remains unbuilt.”

Haas identifies two reasons skyscrapers are less popular on this continent than others. The first is that land ownership is often disputed, and nobody can risk making large investments on land that may later be taken away from them. Another is that big buildings require big financing, and that financing is hard to find.

In a 2017 journal article in Géocarrefour, researchers Valerio Bini and Cristina d’Alessandro identify a third reason: that, in general, land in Africa is still too cheap to make it economically viable to build vertically rather than horizontally. (This point should make intuitive sense to anyone familiar with Johannesburg’s sprawling housing estates).

They argue that building skyscrapers in Africa is less about economics and more about presentation — a “monumental and symbolic strategy” to convey “an image of power and modernity”. This makes the Leonardo — and previously the Carlton Centre — the most powerful and modern symbol of them all.

Amira Osman, a professor of architecture at the Tshwane University of Technology, agrees. “Skyscrapers are always a demonstration of wealth and power and dominance,” she said. And, in the case of the Leonardo, the image being projected is one of luxury and exclusivity, hermetically sealed — by design — against the rest of the city and the country in which it resides.

“It is Sandton doing what Sandton always does,” Osman added. “It is a vertical gated community that imitates public space. But it is not a space for mixed income users or diverse, income-generating opportunities. I don’t see the pavement sellers or small shop owners being able to operate there.”

The view from the top

For 45 years, the Carlton Centre was a monument in concrete — so much concrete — to the hubris of the apartheid regime under whose auspices it was constructed. “Now at last it was possible to build in Johannesburg on the scale appropriate to a metropolis,” wrote Wilfred Mallows, a town planner who worked on the plans for the Carlton Centre. “There for all to see, Johannesburg had finally broken the constraints of the diggers’ camp and achieved the a new image: the image of a city of a million people.”

But, like the central business district that surrounds it, the Carlton has fallen on hard times. Once intended as a beacon of opulence, the building has now been mostly abandoned by its owner, Transnet, which has yet to begin a promised maintenance programme to modernise ageing piping and lifts.

The viewing deck on the 50th floor is still open, but it too has seen better days. The walls are covered in graffiti, the café is permanently closed, and the information displays look as if they have not been updated for a decade. A small but steady stream of tourists — a few dozen each day, according to a security guard — still pay the R30 entrance fee to see the views from Africa’s tallest building. But for how much longer? On one recent weekday morning, a tour guide pointed out the silhouette of the Leonardo to two French tourists, and told them: “As soon as they open that one, this one is finished.”

For Osman, the Carlton Centre’s decline is a wasted opportunity. “The Carlton could have been used to rehabilitate the inner city. Now you have the Leonardo, which is just for the wealthy. That dichotomy is really dangerous.”

On the other side of town, Dorrestein stands on the 55th floor of the Leonardo. The views are spectacular. On a good day, you can see the Voortrekker Monument in Pretoria, but on this particular afternoon he is looking south, towards the Carlton Centre, and he is wary of falling into the same traps.

“When the Carlton Centre was built, it was designed by an American firm of architects, Skidmore Owings [& Merrill], very famous. But the company created a building and you will find something like the Carlton Centre of that era and in that style elsewhere in the world. Here we’ve got a bunch of South African architects, predominantly women, and they put together something. The brief was to create something that’s timeless, that is of today, but is great in years to come. But if you take Nelson Mandela Square, if you take the Michelangelo Hotel [both owned by Legacy Holdings], those are timeless buildings, they will be around forever.”

He acknowledges that the Leonardo’s occupants will be only the elite, but argues that the building’s economic effect is considerably broader. For one thing, the building has created 2 000 direct jobs and up to 20 000 indirect employment opportunities through the vast network of contractors required to complete it. Perhaps even more importantly, however, is the enormous vote of confidence that the building represents in South Africa’s economy — and its future. 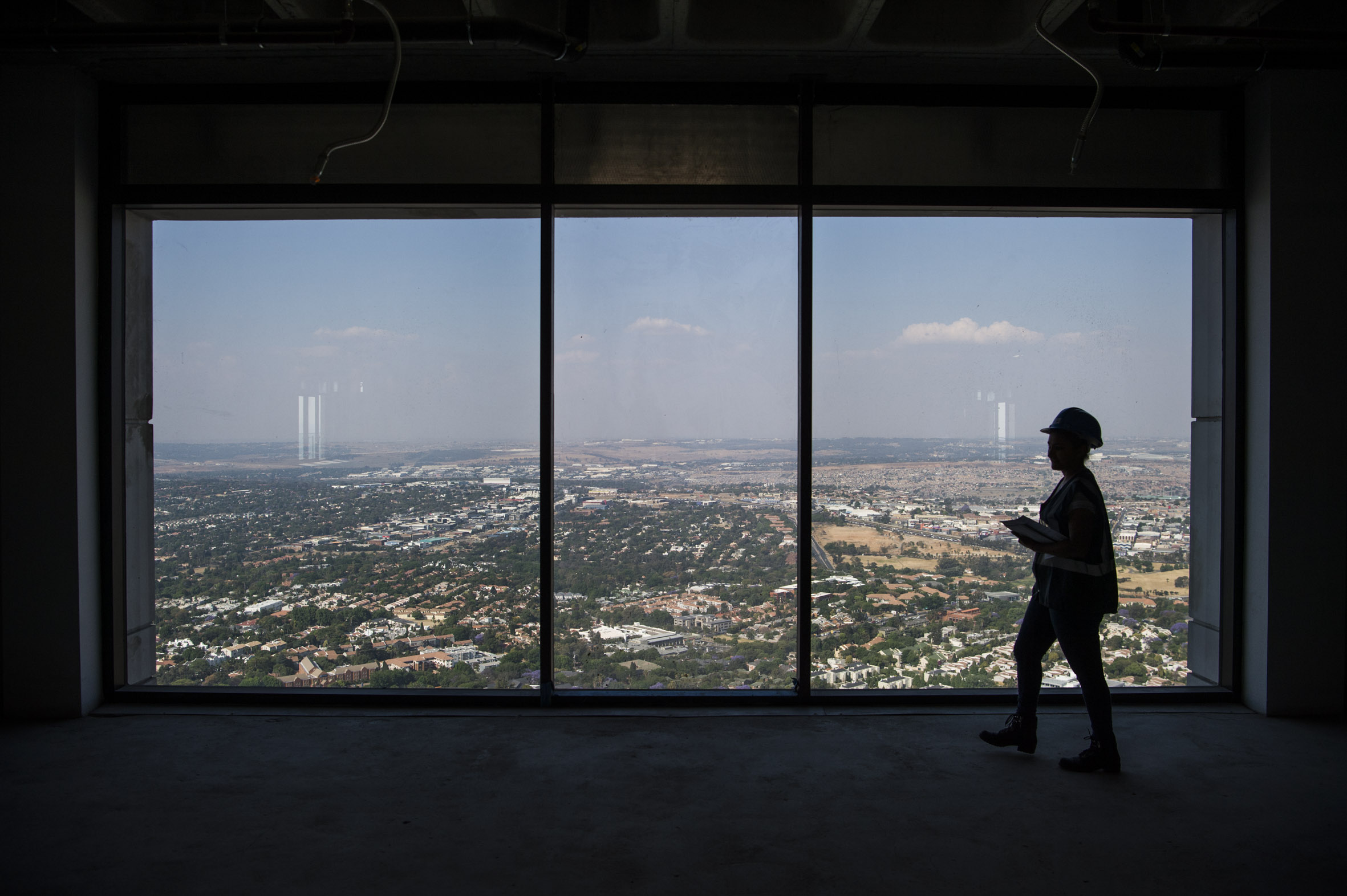 Hermetic: The Leonardo in Sandton is South Africa’s new symbol of ‘opulence’ and ‘confidence’. (Delwyn Verasamy/M&G)

“We are here to stay. I’m a South African, an African — I don’t want to go and start somewhere else. Just look at the urban spaces that have happened, it’s fabulous. This is an aspiration.”

It is unlikely to be another 45 years before the Leonardo is overtaken as Africa’s tallest building. The most likely contender is already under construction in Nairobi: when complete, the Pinnacle could be up to 320m tall. But this project is facing considerable difficulties. In February, the high court in Nairobi issued arrest warrants for the two Dubai-based real estate speculators who are backing it, in connection with a dispute about who owns the land on which the tower is being built.

For now, however, the Leonardo is the undisputed Top of Africa — and someone really needs to update those signs in the Carlton Centre.