Looking at the government’s map of “the social tapestry of Cape Town”, it’s not difficult to see the legacy of apartheid. The map shows many pockets of racial integration, but most black and coloured residents live in the Cape Flats. White people, who make up only 15% of the population, live mainly in the northeastern and southwestern suburbs, the Atlantic Seaboard and much of the City Bowl.

Amazon recently moved into a new eight-storey building in the City Bowl. Other new buildings include the 17-storey Sentinel, “a super-modern glass and aluminium building” and the Onyx, an 11-storey “jewel in the crown of Cape Town”.

In Cape Town, and the rest of South Africa, formal racial exclusion has given way to economic segregation.

After centuries of social divisions, Cape Town’s jobs, schools and efficient transport — sources of economic opportunity — are concentrated downtown and in affluent suburbs.

Most residents can’t afford to live in those areas, and endure long commutes from townships, many lacking parks, hospitals and, in some cases, basic infrastructure for water and sanitation.

Reversing such inequality will require a huge effort with many different solutions, but the City of Cape Town is poised to adopt a new policy that could help.

Known as inclusionary housing or inclusionary zoning, the policy originated as a way to combat segregation in another nation with a history of racial oppression — the United States.

The mechanics of inclusionary housing are simple: owners of real-estate projects are required to sell or rent some of the new homes to lower-income residents at prices they can afford.

In some cases, property owners can provide the affordable housing at a nearby location or pay into a housing fund. Cities can specify how much affordable housing is required, and exactly how low the rent or sales prices need to be.

Inclusionary housing is a form of land value return, or land value capture, a type of policy that allows the public sector to tap the gains from rising property values that result from public sector actions — construction of a new road, for example — rather than those of the individual property owner, and use the value increase for the public’s benefit. One common source of property value increase is a change in the density of a neighbourhood or individual property.

“Inclusionary housing is rooted in the understanding that much of land’s value is generated by actors other than the property owner,” said Enrique Silva, director of international initiatives for the US-based Lincoln Institute of Land Policy.

Willard Matiashe, a researcher for the Development Action Group, a housing policy organisation in Cape Town, described inclusionary housing as “one way of sharing the land value windfalls linked to additional development rights that the city gives to developers”.

Now used in more than 800 US cities, inclusionary housing first gained traction in the 1970s, partly in response to a practice known as exclusionary zoning, by which cities used land-use regulations to prevent less affluent, often black people renting or wanting to buy homes from moving to certain neighbourhoods. Common exclusionary measures include prohibitions of flats or smaller homes.

South Africa enforced its segregation through more explicit land-use laws, most notoriously the Group Areas Act, which established different sections in cities for each race. Beginning in the 1960s under this law, authorities forcibly removed 60 000 black people from District Six near the city centre to the urban fringes.

In 1994, the new democratically elected government recognised the importance of land in addressing inequality. In an early white paper, the government committed to establishing “socially and economically integrated communities, situated in areas allowing convenient access to economic opportunities as well as health, educational, and social amenities”. Two years later, it enshrined these ideas in the new Constitution.

But breaking the cycle of segregation has proven difficult. In response to an urgent need for basic housing, the government has built millions of homes for low-income South Africans, but they are located mostly at the urban periphery where land is cheaper. These homes provide shelter but little access to opportunity.

“South Africa has acknowledged in law that they need to have a strategy for desegregation and they’re in search of practical tools to achieve that goal,” said Rick Jacobus, who has more than 20 years of experience in finding new solutions to many social problems and recently travelled to South Africa on behalf of the Lincoln Institute to advise public officials on inclusionary housing.

South Africa’s policymakers first put inclusionary housing on the agenda in 2004 as part of a national housing plan. In 2007 the department of housing produced a framework for national legislation. But these efforts fizzled in the face of opposition from the real estate industry, a downturn in the housing market and technical concerns.

In the absence of a coherent national policy, cities have experimented with their own policies. The City of Johannesburg adopted the country’s first municipal inclusionary housing policy in 2008 for high-priority transportation corridors, although the policy was rarely used. It recently adopted a new citywide policy, but it allows developers to meet the requirements simply by building market-rate homes or apartments — an indirect way to reduce the rent or sale price. These initial efforts have been relatively modest.

There is now a stronger legal foundation for inclusionary housing in South Africa, thanks to another piece of legislation enacted a few years ago. In 2013, Parliament enacted the Spatial Planning and Land Use Management Act, which established spatial justice as one of the core development principles that should guide local land use, stating that “past spatial and other development imbalances must be redressed”.

Lawyers in Cape Town are relying on that law to push for more affordable housing policies.

In Cape Town, momentum behind inclusionary housing has been fuelled by a real estate boom that began in the early 2010s. Home prices have increased faster in this city than elsewhere in the country, in part because of a strong luxury market and demand from foreign buyers, who are drawn to the dramatic landscape and Mediterranean-style climate.

The market has cooled recently amid a national economic slump and a water crisis, but prices in some neighbourhoods are still double what they were just five years ago. Only a fraction of Cape Town’s households can afford the average-priced house.

Building on the legal foundation of the Spatial Planning Act, an activist group called Ndifuna Ukwazi (“Dare to Know” in isiXhosa) began in 2017 to file objections against real estate projects for which property developers sought changes in the regulations — to build above the allowable height, for example. These challenges have led some developers to voluntarily add affordable housing to their projects, but the process has been ad-hoc, often with weak enforcement.

Last month, Ndifuna Ukwazi escalated its campaign with a lawsuit against the City over its approval of a proposed mixed-use tower called The Vogue, which would become one of Cape Town’s tallest buildings and promises to be “iconic in both form and function,” with “undulating balconies and roof gardens” and “top-level penthouse apartments which will all enjoy panoramic views over the Atlantic Seaboard”.

Among the handful of Capetonians who could afford an apartment in the building, nearly half are white, Ndifuna Ukwazi said in its lawsuit. 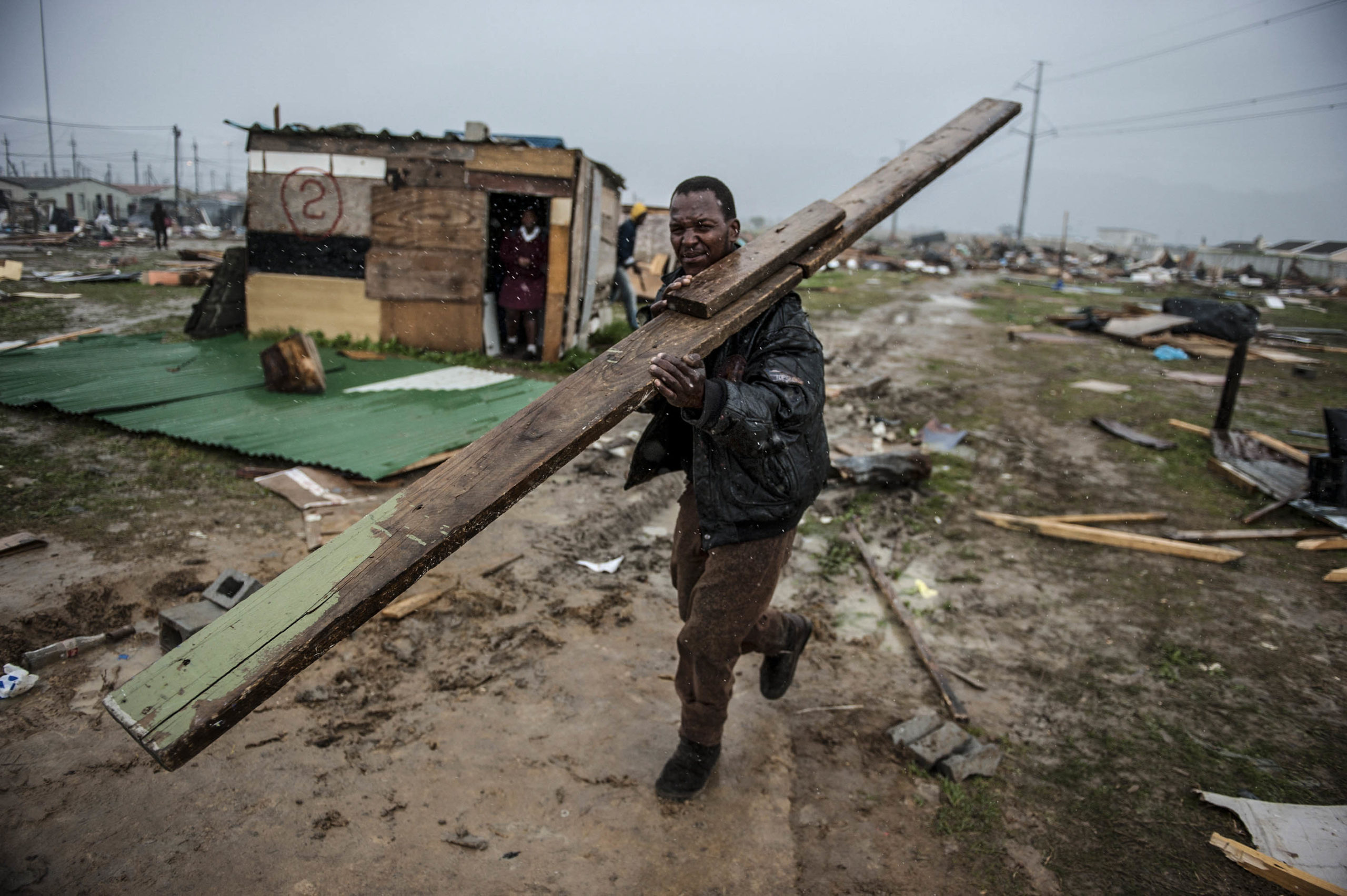 Excluded: Nomzamo is national roads agency land near Strand in Cape Town and has witnessed protests by neighbouring property owners, removals and rebuilding – and the battle hasn’t ended yet. (David Harrison/M&G)

“Every new exclusive development that is approved by the City without affordable housing entrenches a system of racial segregation and unequal access to services,” the group said in a statement.

Such pressure has made property developers more open to an inclusionary housing policy. Last year, they sat down with advocates, housing specialists and city officials in a series of dialogues, hosted by the Development Action Group and the Lincoln Institute. Developers said they would prefer the certainty of a citywide policy if it could eliminate the risk of challenges to individual projects, which can create costly delays.

“Developers in the room were saying, ‘give us the number so we can factor that into our proposals’,” said Matiashe of the Development Action Group.

Nigel Burls, a Cape Town planning consultant who works for property companies but did not participate in the dialogues, said the developers “will jump on the bandwagon” if an inclusionary housing policy “seems to be addressing a problem and it’s not seen to be penalising developers”.

The city is making efforts to enact such an inclusionary housing policy. In a concept document released last year, it proposed to tie inclusionary housing to zoning change or additional development rights that increase property values. A draft policy is expected sometime next year.

“If we can get a policy together that speaks to more equitable ownership and benefit from the land and land value, it’s an incredibly important moment,” said Gail Eddy, a research officer for the City of Cape Town who is helping to craft the new policy.

By itself, inclusionary housing would not solve Cape Town’s problems of segregation and unaffordable housing. The policy would only work in neighbourhoods that can attract market-rate development, which excludes large swaths of the city where infrastructure is poor. It would not produce nearly enough homes to meet the needs of the poorest residents.

Nevertheless, an inclusionary housing policy would establish the principle that everyone has a claim on land and its value, and that the city can use land to redress its inequalities.

“Inclusionary housing is a statement that land should be used for the benefit of the public — in the case of Cape Town and South Africa, to help reverse longstanding patterns of exclusion,” said Silva.

Will Jason is associate director of communications at the Lincoln Institute of Land Policy in Massachusetts, United States. This article was first published on the institute’s website, which can be found at: https://www.lincolninst.edu/