Rugby and a rainbow’s pot of gold

Sport delivers, often like nothing else. As Siyamthanda Kolisi bowed to the Japanese crown prince and then hoisted the Webb Ellis Cup into the Yokohama night, millions of South Africans back home screamed and hooted and saluted the 28-year-old and his outstanding team of characters.

Eighty minutes is not supposed to change lives. But over the course of that time frame, the Springbok class of 2019 allowed their fellow South Africans to delve momentarily into their dreams and consider that light may yet emerge from the long tunnel of tough times for those at the tip of Africa and the top of the rugby world.

It is telling that coach Rassie Erasmus focused on bringing hope to South Africa in the final weeks of a journey that has spanned all of two years, with a team so shorn of hope and direction that there were fears for its very future. Sport, however, can restore hope and rebuild reputations.

Cinderella stories are strewn across this squad like the confetti that fluttered over the Boks in their golden hour, with players’ cultures and backgrounds as diverse as the positions and functions they perform within the team.

Kolisi, by virtue of being the exceptional inspiration that he is for millions of ordinary South Africans, claimed many of the headlines. But he did not miss the opportunity to praise the leaders within the team during the World Rugby Awards held on the evening of November 3. 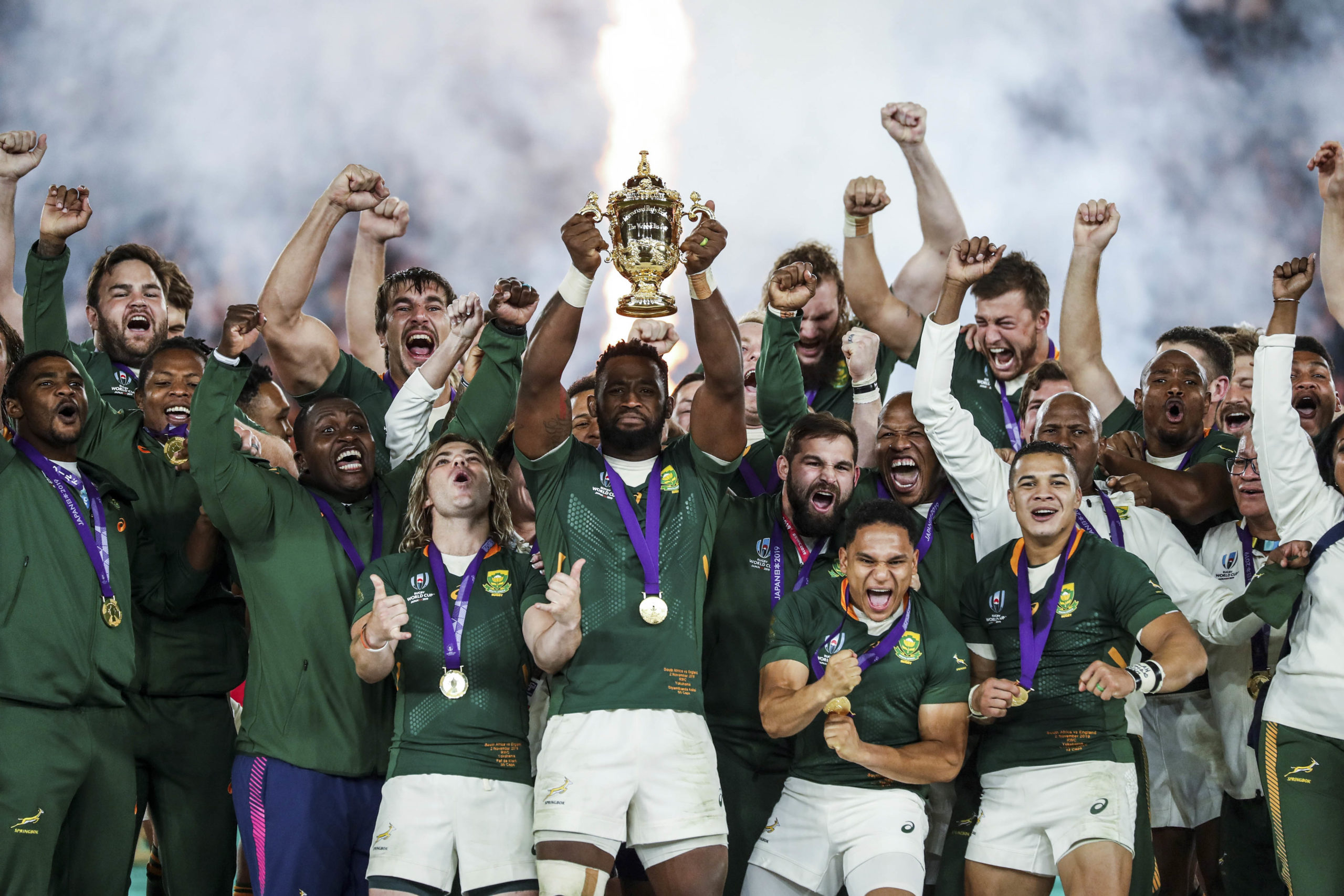 “These are some of my heroes that I’m playing with,” said Kolisi.

He pointed to Duane Vermeulen, the titanic presence at the back of the scrum and the quiet word in Kolisi’s ear during trying times. He pointed to Frans Steyn, who returned from his European odyssey with a zest for the jersey similar to that of Os du Randt in 2007.

Like the legendary Du Randt, the utility backline star now has two gold World Cup medals. His boyish delight at being there once more was evidenced by the manner in which he entered the changing room, the trophy above his screaming head.

Kolisi also pointed to Eben Etzebeth, the controversial man mountain facing accusations of hate speech and assault, who held the captaincy before him. Theirs is a kinship built over years playing for the Stormers and Western Province. The towering second-rower knew what kind of skipper his country was getting when Erasmus played his masterstroke in June last year.

There was plenty of doubt, but Erasmus and his decisions over the past two years have confirmed that he is a true visionary as they have all paid rich dividends.

Kolisi was not a political score, but a magnet for the masses that still felt on the edges of the green and gold. Kolisi’s ascension brought them in, and they have expropriated the space with rhythm and riotous pride for the most representative South African team yet.

The 1995 tournament was historic, iconic and incomparable for what it did for a new nation still figuring itself out. Then president Nelson Mandela hoped that the triumph would be a launching pad towards unity, but the repairs have taken a lot longer.

The win in 2007 was another red-letter day for South African rugby, with Bryan Habana as the beacon of sporting brilliance and the talismanic John Smit lifting a cup that confirmed the enduring effect of South African rugby’s traditional strengths.

The 2019 Rugby World Cup was different, however. It just had to be.

This win comes at a time when there are many ominous shades to dull the rainbow South Africa likes to portray itself as. Corruption. Crime. Violence against women and children. Unemployment. State capture. Inequality. Woeful parastatals.

These are problems that even rugby cannot fix. But the seven-week journey on which the Springboks took an ever-growing army of fans has revitalised the eternal dream that this country, full of peril and potential, can succeed when it pulls as one.

The cathartic victory is a fresh reminder that honest endeavour brings with it the greatest of joy, untainted by shortcuts or favours. The Springboks went through depressingly dark times, and even the most ardent fan feared for their honour in this World Cup.

And yet their wallowing of 2017 illustrated that it is truly darkest before the light. The country had never seemed darker — save for the bouts of load shedding — than in the months preceding the World Cup, when the price of human life and personal safety for women and children seemed to tumble to even grimmer lows.

A rugby victory doesn’t mask that, and it certainly doesn’t fix it. It doesn’t strengthen the rand exponentially. It doesn’t diminish inequality or injustice. But a rugby victory does restore faith that cohesion can lead to a better outcome for all. That is why the celebrations across the country were so heartfelt. Sport is a heady painkiller, especially in a code as beautifully violent as rugby.

It was fitting that the final was against England because it was against the men in white, in 2018, that this Springbok side took its first steps towards World Cup glory. It was before the miracle of Wellington, the cliffhanger at Loftus and everything in between June last year and November 2 this year. It was that crazy June day at Ellis Park that ignited belief in the stands.

Cast as dull and uninspiring in the build-up to the final, South Africa saved some of their sorcery and speed for the coup de grace, with both wings dotting down with panache. All England could do was play second fiddle. They had played their final the week before against the All Blacks, and didn’t get close to those heights in the biggest match of their lives.

South Africa, as Erasmus had dared, seized the moment with brute force and unwavering commitment.

The pride at stake in repelling England before halftime bordered on kamikaze, but that defiance must have broken English spirits — and lifted South Africa’s.

The V&A Waterfront in Cape Town burst into a rousing rendition of the anthem, each verse getting louder and prouder. In Durban, fan parks across the city basked in sunshine and the warmth of a truly South African triumph.

In Zwide, the air was thick with sentiment — at Gqalane’s Tavern, where Kolisi famously watched the 2007 triumph as a teenager, the drinks flowed along with songs of joy and tears of pride. In Gauteng, from Loftus to Fourways and Soweto, fan parks were a sea of glorious green, all soaking up the moment.

On the streets, it was beautiful bedlam as flags were waved and a glimpse of the rainbow was seen.

Traffic came to a standstill of the best kind, as strangers revelled in the moment. That has always been the power of sport, because its joy is a universal language.

In the bowels of the Sandton Convention Centre, the Gwijo Squad formed a 1 000-strong choir as their own journey with the Springboks came full circle.

A group of friends, some close to Kolisi, felt the need to make his first Test as official captain, in 2018 against England at Ellis Park, Siya Kolisi Day.

They mobilised as one, and danced and sang their way into the stadium and straight into the South African consciousness. They have followed this team throughout and their numbers have swelled by the week as their uniquely South African style of support intrigues the uninitiated.

The only person who could interrupt that song was the captain himself, at his final pitchside interview.

Immediately the thousand went silent, yearning to hear one of their own try to describe the indescribable.

One of Kolisi’s great gifts as a leader is his ability to read a room. He always leaves a word for the underdog, perhaps because he has been one himself for so long.

The long and winding road — from rags to rugby, Rachel, responsibilities and now riches beyond materialistic measure — have crafted a heck of a story behind the man, but he is simply proudest of all to be a South African. It is why he remembered to acknowledge those watching in taverns, shebeens and the homeless who were supporting the team.

The 1995 win was history, a fairy tale with no comparison. Winning again in 2007 proved that 1995 was no fluke. But 2019 was the most united South African victory, celebrated across the land and its people. It meant so much to so many.

Having arrived to thousands at OR Tambo International Airport and followed it up with a nationwide tour, the Springboks might understand better just how many lives they touched, how many dreams they sparked, during their rolling maul to destiny’s door.

Sport has opened new doors again and it is up to the leaders of the day to take the baton and be the change that all South Africans want to see.

The problems that face many don’t miraculously evaporate, but for one weekend at least the South African mantra for many was a simple and celebratory one: “Braai, the beloved country.”