When Namibians voted on Wednesday, the ruling party faced a rare challenge to its dominance after a recession and a corruption scandal fuelled discontent.

But analysts believe the opposition remains too weak and divided to put up a credible fight in the presidential and parliamentary vote, with Swapo continuing to bask in the legacy of its liberation struggle pedigree. The party has ruled the sparsely populated nation since independence from South Africa in 1990.

President Hage Geingob, who cast his vote at Mandume Primary School in Windhoek, is expected to win, but not with the dominant 87% of votes he garnered in 2014. The president was the first to vote at the school. 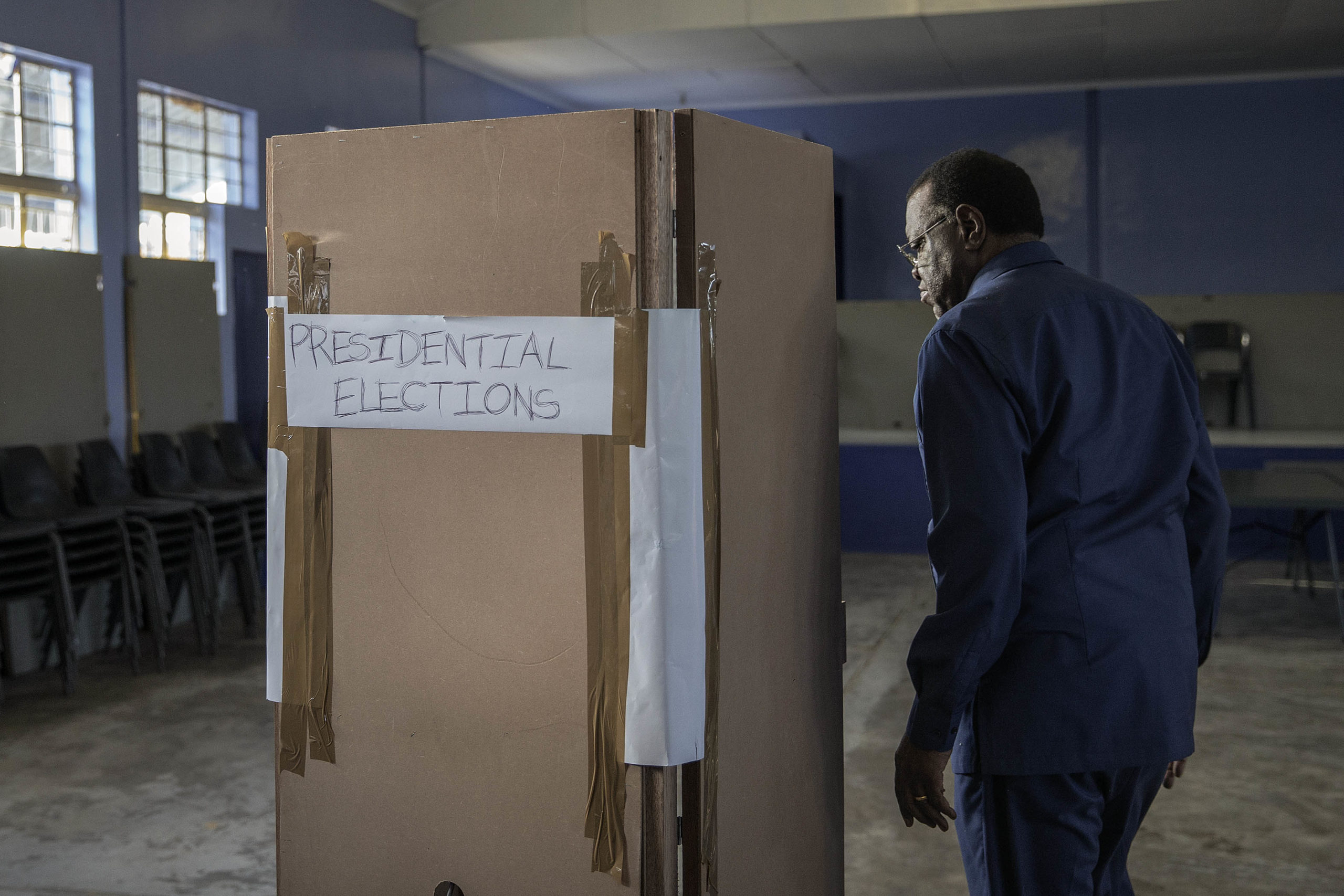 As polls closed, voters were still lined up to cast their ballot at some polling stations.

Namibia introduced electronic voting machines in 2014, the first country in Africa to do so. The machines, which are meant to speed up voting, have been criticised by the opposition, which claims the absence of paper records raises the prospect of fraud. But the electoral tribunal threw out an application by Panduleni Itula, an independent presidential candidate, to ban the machines.

READ MORE: Landmark e-voting to go ahead in Namibia after court challenge fails

First time voter Kaino Mbeeli, 25, bemoaned the slow pace of queues, saying the line had hardly moved since he arrived. “I am not willing to go home without voting … because I really want my vote to count so I’m just going to stay here until my vote is heard,” said the medical graduate.

The government took another hit this month when Wikileaks released documents alleging corruption in the fishing industry, its second most important sector after mining.

The “fish rot” files suggested that government officials took bribes from an Icelandic company in exchange for continued use of Namibia’s fishing grounds. Two ministers resigned over the scandal, which allegedly involved R150-million. A former fisheries minister was briefly detained over the weekend.

Geingob has denied any involvement in the scandal and said the timing was intended to damage his campaign.

The president has also come under fire for pumping money into a bloated administration and granting contracts to foreign companies rather than boosting the local economy.

The Popular Democratic Party (PDM) presidential candidate and 2014 runner-up McHenry Venaani said the results were likely to be very close.

Swapo’s historic challenger has been hurt by its links to apartheid South Africa. The PDM was formerly the Democratic Turnhalle Alliance, which was formed in 1977 after the Turnhalle Constitutional Conference to prepare for a self-governing Namibia under South African control. It acquired its new name in 2017 to mark its shedding of its past.

“Ten years ago I wouldn’t have dared voting here, people would have stoned me,” Venaani told reporters after voting in Katutura, Windhoek. He came second in 2014 with less than 5% of the vote. Despite doubling its support base, the PDM won only five of 96 seats in the National Assembly.

Swapo meanwhile has enjoyed a two-thirds majority in parliament since 1994.

“This [election] is slightly different,” said Graham Hopwood, director at Namibia’s Institute for Public Policy Research. “Although I think Swapo is still in a dominant position, we have had a three-year recession since 2016, and we have very high unemployment, high inequality, so one would think that would affect the voting patterns and the election in general.”

About 1.4-million of the desert nation’s 2.45-million population was registered to vote. Half are younger than 37 and many were born after independence. — AFP

Benin’s democratic crisis is deepening, but no one is paying attention

In mere months, Moderna transformed an old Polaroid factory in America into a state-of-the-art vaccine-production centre. Why can’t we do the same?
Environment