Citizenship can’t be taught in a module 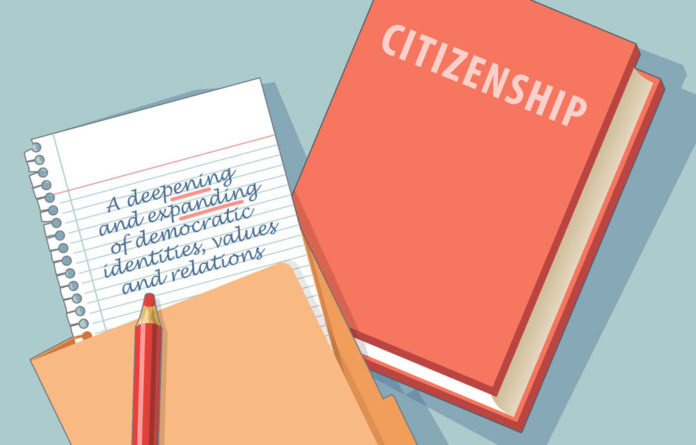 After the outcry over the nonsensical article, “Age- and Education-related Effects on Cognitive Functioning in Coloured South African Women”, Stellenbosch University’s senate adopted a motion, which reads: “We believe the university should become a key site for developing a critique of race in science and research, and establishing related institutional practices and processes.”

Four proposals were referred for further consideration and action: “consideration be given to instituting a campus-wide mechanism dedicated to transforming research and science”; “offering a module on antiracism, democracy and critical citizenship to all first-year students”; “a suite of short courses for all staff members on topics such as the use of human categories in research and science”; and to “determine whether some academics may already be focusing their research on gender and critical race studies. The objective would be to build a network of experts in these fields.”

The only criticism might pertain to the fact that it has taken an unintelligent article to jar the university into a re-consciousness of what its ethical responsibility ought to be.

Let’s look at the proposals. We should have the expectation of any university to ensure that it holds its academics and researchers to particular ethical standards of research and to act when these standards are undermined or compromised. So, too, we should expect a university in a democracy to be sensitive to issues of race, gender, (dis)ability, sexuality, culture, religion, ethnicity, nationality, language and class.

A university should not have to be reminded that it has an ethical responsibility to cultivate safe and inclusive spaces of recognition and respect. It is the second proposal that I believe presents the greatest challenges, because it speaks to the heart of the civic responsibility of any university. What kind of student does a place like Stellenbosch University produce? Not the qualification, but the citizen.

Let me start by stating that it is not entirely clear why this specific proposal has been included with the other three, given that the source and scope of the problem (the above-mentioned nonsensical article) has, in fact, not been instigated by students. Of course, it would not be an exaggerated generalisation to assert that this university, like all others in South Africa, and elsewhere, have had abundant incidents of questionable and anti-social behaviour by students.

For most first-year students, entering a university space represents the first occasion for being with people who are different to themselves. To teach them, and to tell them about how non-racism and democratic citizenship works, will not get these students to learn how to be non-racist and democratic.

The idea that a module directed at a first-year class might somehow insert the necessary understandings of anti-racism, democracy and critical citizenship is to reduce democratic citizenship education to a compulsory tick-box of attendance. It is akin to trying to teach an individual how to ride a bicycle without them having to get onto a bicycle.

Unlike schools, universities are inhabited by adults who have already experienced their formative years, and who would already harbour particular views and (mis)perceptions — put in place by their families, friends and their schools. I cannot see how a cramped first-year class would lend itself to what citizenship education requires.

What citizenship education and civic responsibility require is for students to come together; they need to bring their different backgrounds and worldviews and come into meaningful discussion so that they can make sense of themselves, of others, and of themselves in relation to others.

The first point of departure, therefore, of any module or programme, that seeks to inculcate the values of thinking and being democratic is to embody that which it seeks to inculcate. Students need to learn how to think, listen and consider different perspectives.

They need to be provided with spaces where they can step out of who they are and cross over into other life worlds. It would seem that universities ought to be asking themselves whether they are providing spaces of equal belonging to all students, and staff.

Second, citizenship education needs to be contextualised in a set of values. If the intention of universities is to produce students who are critically conscious of themselves as human beings and as citizens, then universities have to reflect and defend this kind of knowledge. Research that inflicts harm and

denigration on any group or individual stands in contradistinction to what it means to act humanely or justly.

This means that if universities wish for students to be critically aware, responsible and responsive to the world they are in, then universities have to be unconditionally open to critiquing any form of injustice. Universities, therefore, as the epistemological and ethical spaces of students, have to be just in how they conceive of themselves, how they interact with students and staff, and they have to be seen as acting in the face of injustice.

This is the kind of context that will allow young people to live and flourish in the principles and practices of democracy.

In sum, what I’m arguing for is a deepening and expanding of democratic identities, values and relations. The point of deepening the possibilities of democratic ways of thinking and acting is that students have to live and experience these ways in the spaces in which they find themselves — whether it is a lecture hall, a laboratory, residence or the cafeteria.

Students and staff must be able to identify and relate to the spaces which they occupy. It is through these points of resonance and recognition that students and staff find not only familiarity and belonging, but also a stronger impulse to expand on what they experience. The idea that citizenship education can be relegated to a compulsory module is to treat the cultivation of citizenship as a supplementary activity, when it should be at the centre of what universities do and aspire towards.

Professor Nuraan Davids is chairperson of the department of education policy studies at Stellenbosch University. This is an abridged version of an article published in the South African Journal of Higher Education

Reflections on George Bizos, on whose shoulders we stand