Across the world dramatic protests have been a major feature of the past year. In Hong Kong, Iraq, Chile, Venezuela, Bolivia, France, Spain and Kashmir, hundreds of thousands of people have thronged the streets. In September the global climate strike saw protests taking place in as many as 150 countries. In other areas, such as the West Bank, protests have been ongoing for years.

In many countries the weapons and ammunition used against protesters by police have been highly controversial. In Chile, mass protests in response to the increasing cost of living, inequality and privatisation started in October. Since the protests began more than 200 cases of severe eye injury have been reported.

The shotgun rounds fired by police carry 12 or more small pellets which, police claimed, were primarily made of rubber. But last month a study commissioned by Santiago’s Salvador Eye Hospital found the pellets were only 20% rubber and mainly composed of other materials, including lead.

At the end of last month, evidence about the composition of the pellets and the large numbers of eye injuries resulted in use of the ammunition being suspended by the Chilean chief of police.

In Kashmir, where Indian security forces use conventional lead birdshot against protesters, the number of eye injuries has been even greater. According to a New York Times report, between July and August more than 570 patients with eye injuries from lead bullets have been reported at the main government hospital in Kashmir’s capital.

In Iraq, where police have used live ammunition to quell protests, more than 100 people — and possibly more than 300 — have been killed in protests that started at the beginning of October.

Protests over the past year in South Africa have not been dominated by a single movement. But whether related to violence against women, contestation about employment and immigration, labour, or community issues, protest is an ongoing part of our reality. Many protests take place without police using force. When they do, the ammunition that is used most frequently is a cartridge that contains two firm, rubber balls.

Although these are less dangerous than the ammunition used in Iraq, Kashmir and Chile, there are serious risks associated with their use. Since the April 2011 death of Andries Tatane, there have been at least two people — and possibly several more — killed by them. People who are particularly vulnerable include young children and the elderly. An 11-year-old boy, Karabo Khumalo, died in February 2017 after being hit in the head by rubber bullets during a protest in Bela-Bela. Thembekile Fana, a 61-year-old man, died during a protest in the Eastern Cape in March last year.

The risk of fatality — and serious injury — is greatest when these rounds are fired at close range, as happened in Tatane’s case. In recent years there have been repeated cases of police firing rubber bullets at very short or even point-blank range, often without any justification. 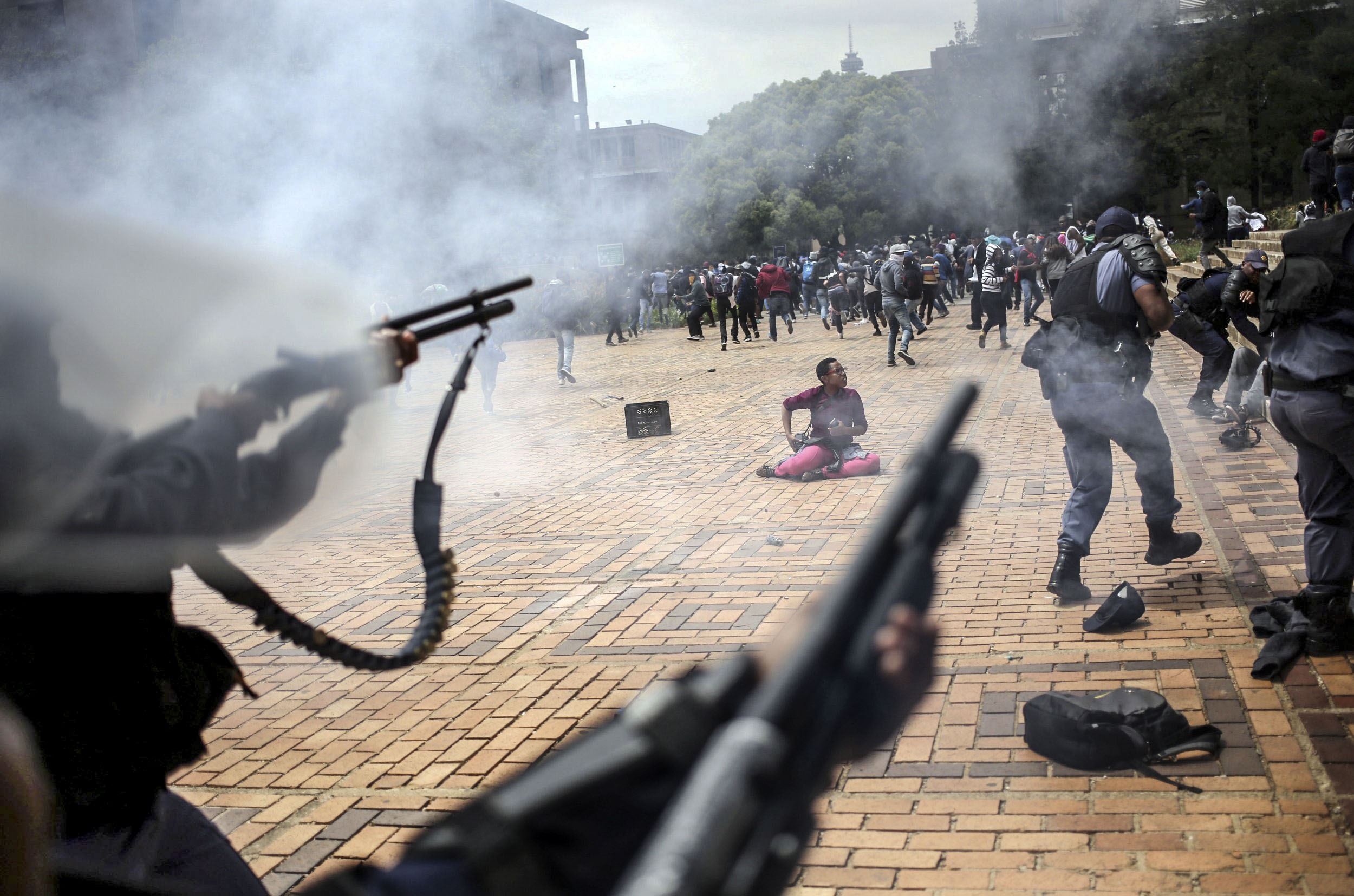 Excessive force: During the Fees Must Fall protests at the University of the Witwatersrand in 2016 there were numerous incidents of police firing rubber bullets at very short range. A Braamfontein office cleaner who was hit by a stray rubber bullet during these protests lost the use of his eye. (Siphiwe Sibeko/Reuters)

Recent incidents of flagrant misuse of these weapons include the shooting last month of South African actor Patrick Shai. He was hit by 11 rubber bullets after trying to discourage protesters from burning tyres on a road in Soweto. His injuries suggest that he was also shot at close range. During protests in Hout Bay in 2017, police shot a 14-year-old boy, who was sheltering under a wooden table, in the mouth with a rubber bullet at close range.

The rubber rounds used by the South African Police Service (SAPS) are, in fact, accurate only at short range. Ball rounds are inherently unstable aerodynamically. Multiple projectile rounds, whether the 12-pellet rounds used in Chile or South African double-ball rounds, are not designed for accuracy but to disperse during flight. Outdated police approaches to crowd control regarded it as advantageous to be able to hit more than one protester with a single round.

But indiscriminate use of force against protesters is not consistent with constitutional principles and is illegal. In the 2012 Satawu vs Garvas judgment, the Constitutional Court stated that peaceful protesters do not forfeit their right to protest because of the conduct of violent individuals. Peaceful protesters have a right not to be shot by police, even if there are others in the vicinity who are acting violently.

The shooting of peaceful protesters is not only a violation of rights but viewed as counterproductive in terms of contemporary crowd-control theory. Crowds are not homogeneous. Effective management of crowds requires optimising co-operation between police and crowd members, particularly those who are not violent.

When police do not target the use of force at violent individuals, but instead shoot indiscriminately, they unify the crowd in antagonism towards them. Police agencies that take the right to peaceful protest seriously require officers to differentiate between those acting violently and other protesters when using force.

In addition to their problematic ammunition, the police also have only extremely vague guidelines for officers about using rubber rounds. This indicates a leadership failure to exercise adequate care regarding how these weapons are used.

The SAPS should therefore replace the current double-ball rounds. They should also adopt clear regulations regarding rubber bullets or other projectiles that may be introduced in their place. Regulations should emphasise that rubber rounds may not be used at short range unless circumstances legally justify the use of lethal force.

Regulations should also specify that force can only be targeted at those involved in violence. Police should avoid injury to bystanders and protesters whose conduct does not justify the use of force against them. Particular care should be taken if young children, elderly people, or others — such as pregnant women or those living with disabilities — are present.

Police should also receive clear directions about targeting rubber bullets. According to the Omega Research Foundation in the United Kingdom, the police in the UK use “the belt buckle” as “an aim point”. This is partly because the projectiles that are used lose height during flight. If targeted in this way, they are likely to hit the thigh area. In France police are instructed to target “the torso and limbs”.

Improved regulations are only part of what is needed. There is no evidence that any SAPS member has ever been disciplined or convicted for the misuse of rubber rounds. The weapons and protective equipment used by public order police are not clearly marked allowing police who have misused force to remain anonymous.

The deaths of Andries Tatane, Karabo Khumalo and Thembekile Fana draw our atten­tion to the lethal potential of these weapons. But it is also in relation to their broad potential to cause injury that we should be concerned about them.

David Bruce is an independent researcher. This is an edited version of his presentation at last month’s launch of the Institute for Security Studies report, “The use of less-lethal weapons in South African prisons and crowd management”