In preparing for this year’s Cricket World Cup (CWC), the Proteas visualised winning the trophy on top of Table Mountain. Instead, their dream crashed and foundered on the rocks of ineptitude, self-interest and egotism, which appears to have plunged Cricket South Africa (CSA) into its current crisis.

A report compiled by the Proteas team management after their calamitous exit from the World Cup in the group stage, having won just three of nine matches, suggests much of the blame for the poor results can be attributed to CSA board decisions and (in)action, which appeared to have sabotaged months of planning and preparation.

The report reveals the board and CSA chief executive Thabang Moroe’s kow-towing to the Indian Premier League (IPL) and the Board of Control for Cricket in India (BCCI) in not backing up management to obtain the early release of players from the IPL — so they could prepare for the World Cup.

The report, submitted to the board by team manager and doctor Mohammed Moosajee, Proteas captain Faf du Plessis, and head coach Ottis Gibson, also exposes Moroe and the CSA board’s inability to recognise the importance of managing players’ injuries and workloads. And it suggests the chief executive’s reneging on an agreement to extend former coach Ottis Gibson’s contract until 2021 — of which the Barbadian was notified on the day the team flew out to the World Cup in England — destabilised the Proteas.

These acts, described as “sabotage” by one insider close to the team, undermined the expectations that had built as the Proteas secured a 72% win ratio across all formats before the World Cup.

They helped scupper the hopes of a squad that had climbed Table Mountain during a team-building exercise, stopping nine times along the way to the summit to visualise their group stage opponents and rehearse “adversity” drills.

A major sticking point was the early return of key players from the IPL to prepare the squad for the World Cup, which other countries, like Australia and England, had ensured. India were allowed a delayed start to the tournament by the International Cricket Council, giving players a three-week period after the IPL to rest and train.

The rescheduling had repercussions for South Africa, with their match against Bangladesh, initially scheduled for June 22, brought forward to June 2. The Proteas played five matches in the first 12 days of the tournament, the most of any participating team.

According to the report, “the decision to allow/force key players” including Du Plessis, fast-bowler Kagiso Rabada and wicketkeeper Quinton de Kock to remain at the IPL went against the recommendation of the team management, CSA’s medical committee and coach. This resulted in “inadequate player recovery time”, which led to “insufficient rest time with families”, “mental fatigue”, “less practice time”, “an increased risk to injuries” and a “delayed and then truncated camp”.

In the case of Du Plessis and De Kock, who played for the Chennai Super Kings and Mumbai Indians, respectively, in the IPL final on May 12, their return, together with three other players, meant a camp scheduled for 11 to 19 May started two days later than planned. Sources said both players were “exhausted” when they landed in Cape Town, reporting immediately for the camp with no time to rest.

Rabada, who played for the Delhi Capitals, returned on April 28, after an “injury scare” that exacerbated an existing back problem. The Delhi Capitals seemed reluctant to allow Rabada’s return, an impasse resolved only when the Proteas’ physiotherapist, Craig Govender, assessed him in India.

Govender’s examination “established that his injury was more serious than his franchise was making out to be and it was only at that stage, that his release from the IPL had been secured”, the report stated.

According to internal CSA emails the players supported an early IPL release “for a period of rest and rejuvenation before the CWC, similar to what CA [Cricket Australia] and ECB [England Cricket Board] did. This request was turned down by the IPL/BCCI and was not supported by CSA”, the report stated.

In an email sent on April 10, Gibson asks Moroe for clarity on the early return because “the captain and other IPL players are asking me what’s happening about them coming home early … as we discussed”.

Gibson implores Moroe for “an update or anything at all to tell them as I haven’t heard anything about this matter since your trip to India and time is running out?”

Responding on the same day, Moroe cited “pointers” from an April 6 board meeting regarding its decision to “rather adopt an approach of wait and see how the competition progresses as there is a possibility of not needing to recall any player”.

These “pointers” include Moroe claiming that the “CEO of the IPL advised us that the players were okay with staying for the duration of the tournament and he didn’t understand where we were coming from and I was not in a position to argue differently”.

A former CSA employee said the decision not to recall players was made because the BCCI and IPL pressured CSA with threats regarding fixture scheduling.

Moroe said the board would not approve compensating players for the remainder of their IPL contracts and that “after considering what is at stake” for the players and CSA, it “felt there is no need to make a premature request to recall our players”.

Moroe chastised the Proteas management team for not having “communicated its decision to the BCCI prior to the IPL draft in 2018”. A source intimate with team affairs described this as a “lie” as Gibson had “personally” made a request to Moroe “way before the IPL draft” in January.

The email thread is contrary to the CSA’s public stance. In May, TimesLive reported a CSA spokesperson saying: “We are not aware of such a request [for players’ early IPL recall being] made to the executive.” An effective lie to the SA public.

Manjra cited concerns about bowlers’ “high workloads” and the management of injuries following an “incredibly busy season”. His request was in vain.

A source familiar with the team’s preparations said the late arrivals prevented mooted warm-up games against Ireland or the Netherlands.

Injuries affected the team’s World Cup performance. A source said seven players carried injuries into the tournament, during which “an unprecedented number of injuries were encountered”.

According to the report, 12 of the 15-member squad “struggled with injuries and/or illness at various stages of the tournament”. This “severely hampered” the “first-choice bowling attack” which was not the unit the selectors and head coach “put together, and that had won us five of our last six ODI series played. Injuries to key players like Rabada, [Dale] Steyn, Ngidi and [Anrich] Nortje meant that the strength of the team was significantly reduced.”

The M&G understands that players like Rabada and Ngidi would have been rested more often in pre-World Cup matches, but for board pressure on the team to reach its transformation figures. Despite Rabada’s “high” workload being “red-flagged on a number of occasions”, he continued to play, leading to mental and physical jadedness at the tournament.

The report recommends that setting and managing compliance with transformation targets “needs to be revisited by CSA so that our star players like KG [Rabada] and Lungi Ngidi can be given sufficient rest and conditioning”.

The turmoil engulfing CSA also destabilised the team. The report states that the legal dispute between CSA and the South African Cricketers Association (Saca) about the expansion of the domestic leagues “shortly before the tournament commenced was both untimely and unfortunate. As much as we tried to downplay the dispute, it affected the team space.” 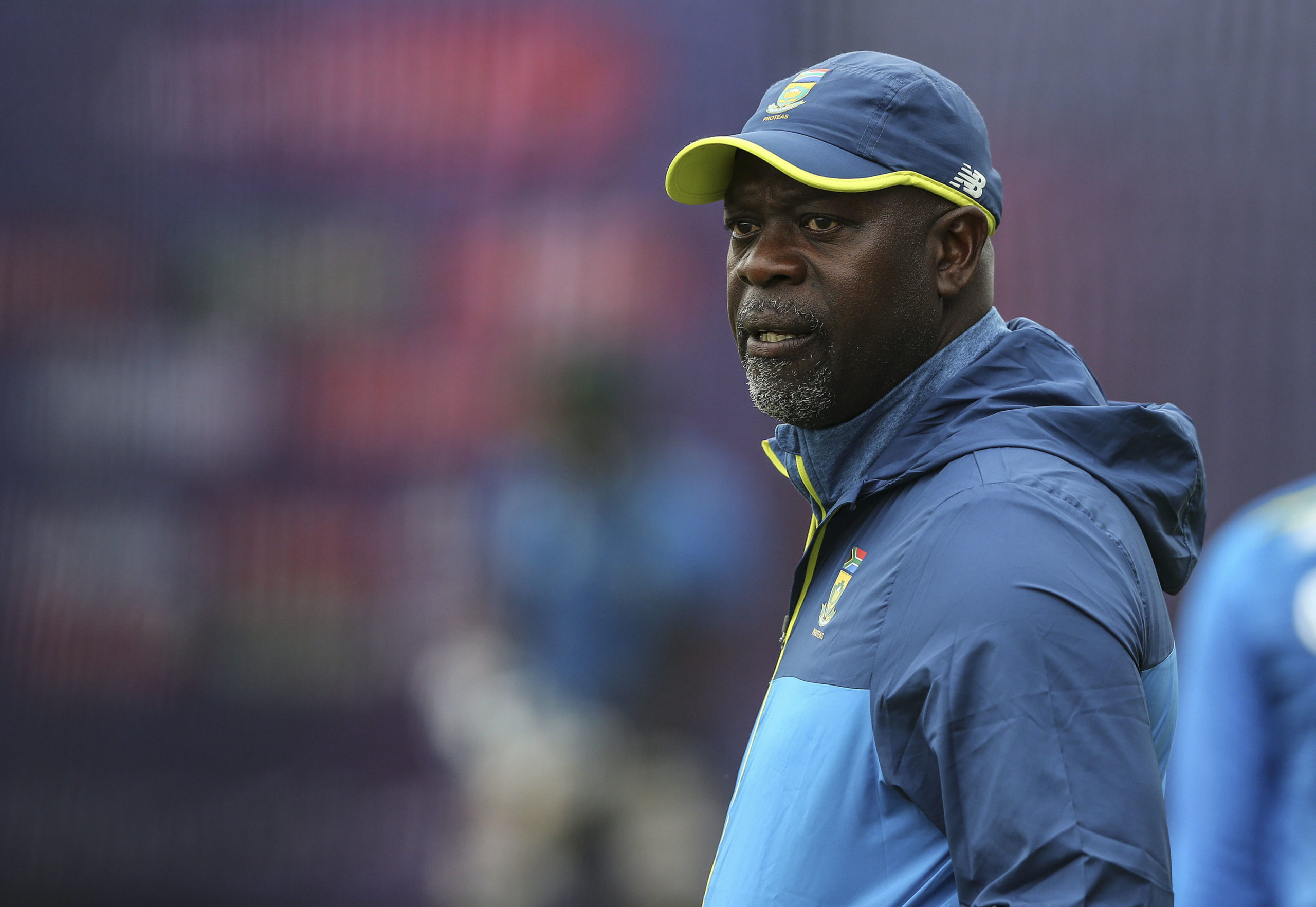 Ottis Gibson found out that his contract would not be renewed on the day the team flew out to the World Cup in England. (Alex Livesey/Getty Images)

CSA’s withdrawal of an agreement to extend Gibson’s tenure as coach until April 2021 was, according to a source intimate with the process, considered by those involved in the team as a punitive measure against the coach, allegedly instigated by Moroe.

This followed Gibson’s objection to CSA president Chris Nenzani about a February 1 board decision giving Moroe final say on team selection. The board had apparently expressed unhappiness about the Proteas transformation targets.

“Ottis phoned Chris to express his concerns and the decision was overturned, but this led to the relationship between Thabang and Ottis breaking down completely and the contract offer being withdrawn,” said a source.

“The board sabotaged us with their decisions,” said a source close to the World Cup team, “You can’t guarantee success in a tournament but we would have been better prepared and given a better account of ourselves had we been given the support that we asked for from the board.”

Responding to detailed emailed questions regarding the actions of both Moroe and the board, CSA head of media and communications Thamsanqa Mthembu requested more time to respond.