It’s the second-last day of 2019. Professor Angela Davis is in South Africa as a part of Afropunk’s Solution Sessions. Acting as a prelude to the festival, the Solution Sessions platform engages social activists and experts from varying fields about ways to right the socioeconomic wrongs affecting the community that is hosting the talk. A crowded room of almost 200 people roars with cheers and applause as Davis concludes her address on “How to be a revolutionary”. The eager crowd hushes as the floor opens for the audience to pick her brain. Davis smiles. Her demeanour is kind but controlled. Her tone is firm but not all-knowing.

One of the audience members asks Davis what she thinks of T-shirts emblazoned with revolutionary messages. Another asks about the weight that art, music, theatre and literature carry in a revolution. Davis sits up in her chair and sighs. She tells the story of the first time she saw her face on a T-shirt. She then lets out a short but sincere chuckle before she confesses to once having a collection of T-shirts with radical messages.

“The first time I met a black woman who had a T-shirt with my face on it and I asked her why she was wearing the T-shirt. She said she didn’t really know that much about my history but she said whenever she wears that T-shirt it makes her feel powerful. I said, ‘Right on’.”

Although Davis has since neglected her collection of T-shirts for a more hands-on approach to activism, she’s weary of invalidating those whose radical begins through the sartorial.

“The more I think about how I’ve seen revolutionary consciousness develop,” she says, “the more I recognise that everything is necessary.”

Davis’s call, in essence, is for a creative, “imaginative and multidisciplinary revolution”.

After decades of defying the status quo at a systemic level, she says one of the most fundamental parts of a revolution is sharing the information that will conscientise the masses and transform passive civilians into activists. This is because, “The real work is not so much the demonstrations but in changing people’s minds and hearts”.

And, for this information to spread efficiently, revolutionaries have to be committed to using a variety of ways to get their message across.

Although she notes the importance of the academic and political discourse that is disseminated through journal articles and speeches at rallies, Davis reminds the crowd not to forget that cultural texts and spaces created for entertainment have a wider reach. “It’s through visual art, fictional literature, films, music and fashion that our deep emotions can be transformed,” she says.

As a long-standing activist, Davis has embodied this multidisciplinary stance by supplementing her lobbyist work, literature and teaching through availing herself to other art forms. Think of how she wrote an essay that accompanied Nina Revisited: A Tribute to Nina Simone by various artists or how she continues to make herself available as a subject in documentaries such as Dolores (2017) .

This approach can also be seen in the way that Busiswa’s Lahla encourages the listener to acknowledge their freedom of movement by dancing; in the way that Korean director Bong Joon-ho is able to demonstrate the absurd and unsustainable nature of capitalism by capturing the mundane details of our everyday through a lens that is too close for comfort in his 2019 film, Parasite; in the decision to wear a T-shirt that reads “Why be sexist, racist, transphobic, or homophobic when you can just be quiet?” to run errands at the mall.

This sentiment about the centrality of culture echoes the activist’s 1999 book Blues Legacies and Black Feminism, in which she examines the work of three women who sing the blues: Gertrude “Ma” Rainey, Bessie Smith and Billie Holiday. Through a feminist reading of their discographies, Davis demonstrates how the blues have served, and continue to serve, as a tool that can raise the listener’s consciousness.

In the books first chapter: “I Used to be Your Sweet Mama: Ideology, Sexuality, and Domesticity”, Davis explains how the “birth of the blues was aesthetic evidence of new psychosocial realities within the black population … It both reflected and helped to construct a new black consciousness.”

While answering a questions about the need for cultural work in a revolution, Davis returns to her point about the need to use the arts to inform the masses. She says that once this role is fulfilled, the next step of creative messaging is helping the marginalised construct a new and free consciousness.

Through this thinking, Davis suggests that because the marginalised are yet to be free, they do not have a reference of what holistic freedom — that goes beyond the abolition of apartheid — looks like. This, according to Davis, is where the role of the imagination comes in. She explains that being a revolutionary requires that we be attentive to the future to avoid being “so involved in doing the work that we are totally determined by the present”.

“We have to always think about mentoring new generations so that we may eventually reach a moment where people can say remember that racism,” she says.

What is unfortunate about this multidisciplinary revolution that is grounded in the arts and culture is how its existence can often rely on its commodification. For the masses to listen to the music, read the books, watch the films, wear the T-shirts and gain entry into the spaces, they need money for access. Artists, whether underground or commercial, have to eat.

After being in a room filled with folk who have made their way to Constitution Hill from across the continent and the diaspora, Davis’s address ends on a comforting note that validates the crowd’s dreams of a revolution that is black, femme and queer. We leave knowing that although her exact politics may not be applicable to all contexts, the fundamentals — of changing people’s minds through making comprehensive information available and realising that revolutions are not linear and absolute — also rings true in South African’s violent, xenophobic, misogynistic, queerphobic and corrupt context. 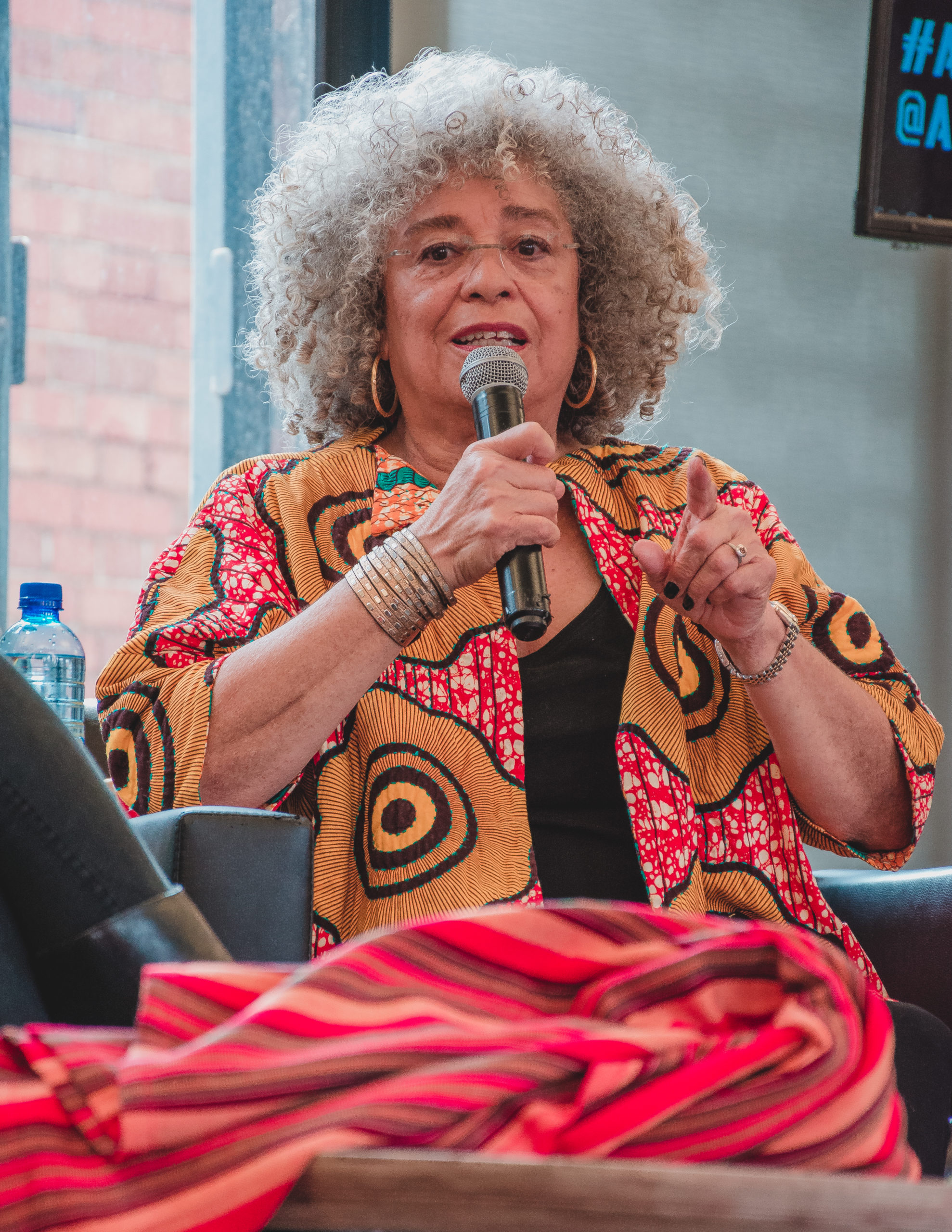 Unrelenting: After decades of activism, Professor Angela Davis is yet to give in. (Lerumo Sibanyoni)

With a bibliography of more than 10 books on race, capitalism, black feminism and the United States prison system, veteran activist Professor Angela Davis is a prolific voice in the US human rights space. In addition to her books, her activism saw her landing up on the FBI’s most-wanted list.

Having purchased the firearms that were used in an attempt to free the Soledad Brothers (among them George Jackson), who were held at the Soledad prison in California, Davis was charged with conspiracy to murder. A 17-year-old Jonathan Jackson walked into a courtroom in California where James McClain and William Christmas were on trial for murder. In an attempt to free the inmates on trial, he abducted Judge Harold Haley, a prosecutor and three jurors. However the hostage-taking led to Jonathan, the two inmates and the judge being killed.

This resulted in Davis’s imprisonment in 1970. She was acquitted of all charges by 1973. Although she was reluctant to write an autobiography, she was convinced to do so by Toni Morrison who went on to edit Angela Davis: An Autobiography (1974).

She continues to champion the abolition of a racist prison system and supports boycotts and divestments in organisations such as private security company G4S, which according to The Guardian is complicit in the torture of Palestinian prisoners in Israel.

Through her resolute and broad contributions toward global human rights, Davis continues to be a reference for emerging activists. — Zaza Hlalethwa