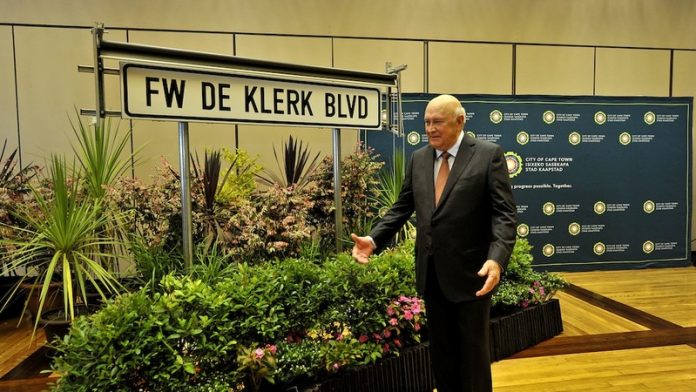 This article was originally published on February 12 2015

He freed Nelson Mandela, shared the Nobel peace prize and, in the once-popular narrative, was the apartheid oppressor who handed power to his former enemies in a moment when hope and history rhymed.

Yet as FW de Klerk marked the 25th anniversary of Mandela’s release from prison, his status as a revered national figure has never looked less certain, his legacy never more fiercely contested.

A new, generally favourable documentary film, The Other Man: FW de Klerk and the End of Apartheid, concludes with the suggestion that the last white president was a South African Gorbachev who saw the light and made the rainbow nation possible.

But many South Africans have been angered by a recent decision by the Cape Town city council, controlled by the opposition Democratic Alliance, to rename Table Bay Boulevard after De Klerk.

“The City of Cape Town’s renaming of the road to FW de Klerk is like a naming a German street after a Nazi,” said a statement issued last week by the ANC’s powerful ally, trade union federation Cosatu.

The ANC’s national spokesperson, Zizi Kodwa, also denounced the honour, saying: “He was part of apartheid. He cannot be a messiah. He did not liberate us.

“The ANC wouldn’t name an institution after FW de Klerk. Renaming is part of our heritage and he played no part in our revolution. President De Klerk is the only living president of apartheid. You can’t differentiate between all the other presidents of apartheid, because all that he did, among other things, was to maintain apartheid.”

The Other Man includes an interview with Marcia Khoza, whose mother was killed by Eugene de Kock, a notorious assassin last month granted parole after 20 years in jail. De Kock, known as “Prime Evil”, has accused De Klerk of having hands “soaked in blood” for ordering political killings, a charge he always denied.

Despite such claims, many of the leading lights from that era have been willing to embrace the former head of state. Mandela’s friend and fellow former Robben Island inmate Ahmed Kathrada said he has no objection to the Cape Town street naming, which also drew support from Archbishop Emeritus Desmond Tutu, former president Kgalema Motlanthe and Inkatha Freedom Party leader Mangosuthu Buthelezi.

But there are younger firebrands in the ANC and the upstart Economic Freedom Fighters (EFF) who openly doubt De Klerk’s sincerity and, although careful not to question the late Mandela’s own moral stature, nevertheless argue that the 1990s were less glorious than billed, with the white minority surrendering political office but clinging to land, wealth and privilege at the masses’ expense.

Fuelling the unrest is a general sense of national discombobulation caused by everything from rolling electricity blackouts to xenophobic violence, from a sluggish economy failing to create jobs to a ridiculed president accused of corruption and steering the ship into an iceberg.

Even the Mandela-De Klerk creed of reconciliation appears to be fraying at the edges, with surveys suggesting racial groups are growing apart and a recent series of ugly incidents coming to media attention. In one, a former tennis coach allegedly attacked a woman with a Taser in a row over a parking space in Cape Town, shouting: “You fucking k***r, you don’t belong here. You should go back to where you belong.”

All this seems at odds with the soaring hopes of 1990, when Mandela emerged from Victor Verster prison in late-afternoon sunshine hand in hand with wife Winnie, and history appeared to have cast De Klerk as a repentant sinner-turned-saviour.

De Klerk told the Guardian recently: “I think what is happening now is militating against Mandela’s emphasis on reconciliation, against his emphasis on saying that all South Africans have exactly the same rights, against his philosophy that there shall not ever be again discrimination on the basis of race or colour. So on that basis, I think he and all those who ardently supported his philosophy would have been – and those who are still alive are – deeply concerned about what is happening.”

The 78-year-old now has a foundation and still weighs in on political issues but carries little influence these days. The Other Man offers a reminder of the singular arc of his life and career. He grew up in a deeply conservative community where memories of British concentration camps fuelled Afrikaners’ sense of vulnerability and desire for self-determination.

His father was among the leaders and architects of apartheid. He tells the filmmakers: “If I look at my career as a president, I really have no regrets. What I did prevented a catastrophe in South Africa.” But what he goes on to say illustrates why, though comparisons with the Nazis are absurd, De Klerk remains divisive, polarising and paradoxical.

“The origins of the concept of apartheid, which we preferred to call separate development, was to bring justice to all South Africans,” he says.

Yet he adds: “When I explain the process of change, I’m not trying to justify apartheid. I’ve come to the conclusion that apartheid was wrong, that it was morally unjustifiable, and therefore it had to be changed, and I’m not justifying in any way the wrongs which took place and which were done to the majority of people living in South Africa in the period of apartheid and separate development.” – © Guardian News & Media 2015

David Smith
David Smith is the Guardian's Washington DC bureau chief. From 2010 to 2015 Smith was the Africa correspondent for The Guardian for which he was based in Johannesburg, South Africa
Facebook
Twitter
WhatsApp
Linkedin