Streetlife over safety in shelters 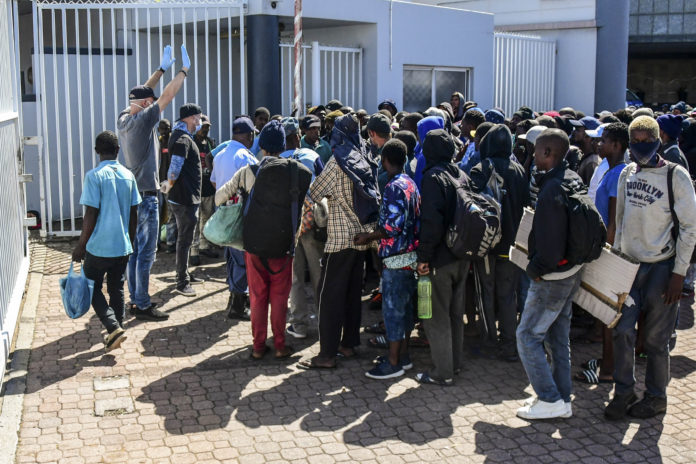 It’s shortly before lunchtime on Tuesday at Jewish Club 1, the call sign for the tented camp for homeless people set up just behind the prestigious Elangeni Hotel on Durban’s beachfront.

Two of the residents are busy with a cricket bat and ball in the vacant space adjacent to the medical caravan.

Jewish Club 2 is on the old Durban Drive-in site and  93 men are split between the two camps.

The batsman, a weatherbeaten man in his 40s, slugs the ball over the vast tent in which he and his fellow residents have been sleeping on pallets and foam mattresses since March 28, the day the Covid-19 lockdown took effect.

The bowler watches the ball soar into the air and heads off to join the queue of men who are hanging about in front of the kitchen tent ahead of the arrival of lunch.

The camp is one of several opened by the eThekwini municipality — along with a number of nongovernmental organisations (NGOs) that have been working with homeless people in the city — to try to restrict their movements.

About 1200 people are now being housed in “designated” sites around the city. Of these, 75 men with serious drug withdrawal symptoms and who required medical treatment have been housed at the Moses Mabhida Stadium car park, where they are receiving assistance from addiction specialists from the city and the NGO network it has partnered with to set up the camps.

A further 400 people, mainly heroin addicts who refuse to be housed in formal camps, are being fed and given medical care in a “non-designated site” in Durban’s Albert Park in an attempt to try and keep them in one area.

Bongani Magagasi Madida, 42, is responsible for both Jewish Club camps. He was homeless himself for five years until he began working as a volunteer for the Denis Hurley Centre, which runs support programmes for homeless people in Durban.

When the Covid-19 crisis began, Madida, who is the chairperson of the Durban Homeless Forum, was asked to take charge of the two camps, where he has overall responsibility for the residents’ physical needs and care.

He said the fact that he had been homeless — he now lives in a shack in the suburb Mayville — made it easier for the camp residents to talk to him about their concerns and their needs.

“The guys trust me. I know most of them from the street,” Madida said. “They find it easy to talk to me because we are from the same situation.

“Nobody wants to be homeless. People face big challenges in terms of family, or unemployment, and they end up on the street. Not everybody [on the streets] is smoking wunga and doing crime, but we are all seen as the same.”

Madida said while they were currently focusing on keeping the residents of the camps safe, the discussion needed to turn to what happened after lockdown. “The question now is what is going to happen after this? Are people going to have a place to go?” he asked. “There had been a proposal about getting a safe open sleeping space, that the government would provide, before Covid-19. We hope that the government can make that happen.”

Sandile Mkhize, 24, ended up in the Jewish Club camp after being screened at the Durban Exhibition Centre along with about 2000 people over three days after the lockdown was declared.

Since then, Mkhize, who comes from Mariannhill, west of the city centre, has been keeping busy by writing poetry and songs and making art. Under normal circumstances, he makes art from empty bottles, sand, seawater and plastic plants, which he sells near the Snake Park pier to make money for a shelter, the cheapest of which cost R30 a day.

Mkhize, who left school in grade 11 because of an ancestral calling, ended up on the streets after coming to Durban to try to find a means to support his parents, who are unemployed and survive on grants.

He has been on the streets for two years.

“I came here to try and make something for my family, to get a job, or to do something with my art. I failed so far but I’m still trying. All I need is a break, for somebody to give me a hand up,” he said.

Hurley Centre coordinator Raymond Perrier, who chairs the NGO forum working with the city, said they were prepared to continue running the camps until the lockdown was lifted.

“We have kept people safe thus far and it makes sense to continue doing so. The municipality is providing the tents, mattresses, ablution facilities, security and other resources,” he said.

“The NGOs are doing the feeding. Some of the NGOs were under strain, hence our appeal for cash to channel money to them so they can continue feeding people.”

Delon Jansen, 35, is one of those homeless people who have refused to make use of the city camps and is now living on the street because the shelter where he normally sleeps has been closed as part of the Covid-19 lockdown.

During the day, Jansen hustles for money and food in the street in Glenwood’s Brand Road. His immediate daily target is still R30, enough for a capsule of wunga, a loose cigarette, a rizla paper and a slope of cheap cannabis to smoke it with, purchased from the yellow house near a street corner in Berea.

On Wednesday morning, Jansen was still soaked from the rain the night before.

“I slept outside the shop until the cops came and chased me. I moved to the gully between the flats around the corner and stayed till the rain stopped,” he said.

At first Jansen claimed he had been refused access to the camps, but then said that he had not attempted to get a place in any of them when they opened.

“I can survive around here. It’s safer for me. People help me out and give me food and a bit of money. I make enough for a sugars [another name for wunga], skyf every day so I’m not rostaring [suffering from withdrawal cramps],” he said.

“If I go there [to the camps], I don’t know what’s gonna happen. I rather stick around here for as long as I can.”