Eusebius McKaiser: A few critics are smoking some strong stuff 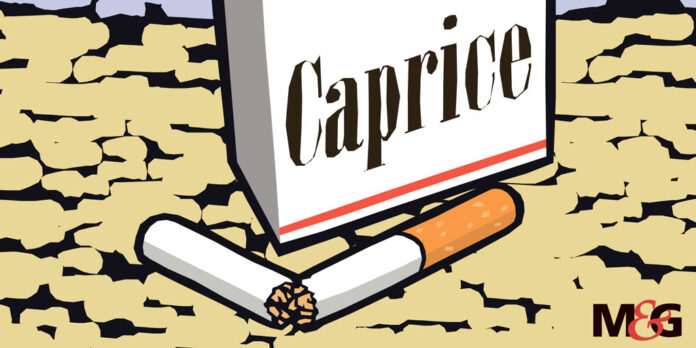 We aren’t always satisfied with not knowing the facts. But instead of investigating, we sometimes fill the gaps in our knowledge with what we wish the facts to be rather than what they have been proven to be.

An example of this has played out over the past few days. No journalist has managed, at the time of writing, to find out factually what the sequence of events and discussions behind the scenes were that had led to President Cyril Ramaphosa declaring that the sale of cigarettes would be allowed from May 1 — only to be contradicted by Cooperative Governance and Traditional Affairs Minister Nkosazana Dlamini-Zuma a few days later.

This is a good political story to put an ace reporter on. Why did the president make the initial pronouncement? What scientific or other considerations informed his initial view? Did he express a view that had been, at the time he had expressed it, accepted collectively by the Cabinet? What changed after that view was expressed publicly that led to the U-turn communicated by Dlamini-Zuma on behalf of the government? Until reporters have pieced together what happened, anything speculative should be marked as uninformed comment rather than as fact or news analysis.

Many people have filled out the lacuna in the story with conspiracies that merely expose their worst fears or indulge their imaginations.

The government is constitutionally mandated to operate on the principle of collective Cabinet responsibility.

This means everyone in the executive jointly owns the decisions that emanate from the government regardless of whose arguments, behind the scenes, won the battle of ideas between ministers and their boss, the president of the country.

It is a crafty principle that has obvious theoretical advantages and disadvantages.

By way of singular examples, it makes it hard for someone to speak out if they feel they have a political or moral duty to do so. These duties may be in tension with the constitutional legal duty and lead to some personal consternation, on particular occasions, about whether to break ranks with your Cabinet colleagues.

The ANC government has often, by the way, leveraged this to neutralise leaders of the South African Communist Party. It brings them into government and puts them in senior positions, and so leave the weaker party functionaries to write endless press statements critiquing the ANC — press releases that never gain traction, because the main brains trust and senior leaders have been silenced by being parachuted into government.

On the other hand, the principle of collective Cabinet responsibility is useful, because it also compels the leaders to get on with the business of running with a difficult and contested decision instead of wasting time and resources by taking debate battles outside of Cabinet after a decision has been formally reached on a policy matter.

In a time like Covid-19, when the clock is ticking and the pandemic is wreaking havoc, one might think it is particularly useful to have this principle in operation, because we cannot afford to be distracted by interesting and colourful public spats between Cabinet ministers when the burden of leadership right now is to make tough decisions under inherently suboptimal conditions and to run with them.

So what does this have to do with Dlamini-Zuma? Well, in the absence of proven facts to the contrary, there is no reason to believe that when she spoke to us about the ban on the sale of cigarettes continuing, she was doing so as an individual Cabinet member. She has all along been part of the leadership wrestling with the contentious questions about what regulations to gazette during the lockdown period.

The absence of evidence that she simply did her own thing does not miraculously count as proof that she did indeed do her own thing. To say that would be to argue, fallaciously, from ignorance. The burden cannot be placed on the person who says she is upholding the principle of collective Cabinet responsibility to show that she did not do her own thing.

That is patently wrongheaded, as debate burdens go, because there is no history of rank-breaking that makes a claim that she wanted to embarrass Ramaphosa even initially credible.

The claim that she was “emasculating” the president, as eNCA news anchor Jane Dutton put it, is not only a bizarre choice of misogynistic language (as if, even if he was to be ambushed politically, Ramaphosa’s manhood or masculinity would thereby be felled). Her claim of an ambush is the more unlikely proposition in all the speculation of what happened and requires proof.

Lack of evidence of what happened inside the Cabinet or inside the National Command Council does not permit you to make up a story of your own (to whatever end).

Does this mean there is no realpolitik inside the ANC and inside the government? Of course not, and no one with even an iota of understanding of politics would be that naïve. But, in a sense, that would be the right observation to make — that differences exist within Cabinet — but doing so on the wrong occasion and with the wrong example.

Also, none of the above entails that Dlamini-Zuma cannot be skewered. It is perfectly okay to pen an article that questions her competency or integrity. If examples stack up, and they lend sufficient weight for such a conclusion, then a sketch of her as dangerous or useless or both must carry. But you cannot tie that project to the singular instance of her announcing the sale of cigarettes that contradicts the president’s statement. To do this is to use a thin evidential base to sustain a broader prior view you have of her. It is lazy to peg such a gigantic conclusion to one moment.

What is also troubling about how this has played out is the disproportionate amount of criticism she got compared with that dealt out to Ramaphosa.

What the government is guilty of — and this is a serious problem — is incoherence. When you make rules, even if you will change them from time to time, the changes must not happen too often, and the reasons for every rule, and every change to a rule, must be clearly and fully articulated. This has not happened in respect of the “now we allow it, now we don’t allow it” confusion about the sale of cigarettes.

Ramaphosa never told us why we would be allowed to buy cigarettes after weeks of government being adamant that the public health case for not letting us do so is unanswerable. If he was merely thinking aloud, why did he not tell us that he is doing so and explain why he was even being tempted to play with the thought in light of weeks of insistence that the issue is not debatable? He did not cite a single reason for what he was considering and yet he was not critiqued robustly for giving us an edict, “Thou shalt now be allowed to buy ciggies!” just like that. But, lo and behold, when Dlamini-Zuma expresses a policy position, she is quickly referred to as the poster woman for a police and nanny state.

Surely the more accurate critique should have been and should be that government, as a whole, messed up royally? Collective Cabinet blame goes hand in hand with the principle of collective Cabinet responsibility.

The wedge that was being driven between the beloved Ramaphosa and the much maligned Dlamini-Zuma says more about how addicted we are to overlooking the sins of our fave leaders than it says anything fact-based about a sudden magical increase in Dlamini-Zuma’s political power. She is no stronger politically now than she was before she told us we won’t be allowed to buy cigarettes after all.

I would rather have Ramaphosa as president than Dlamini-Zuma but it does not follow from this preference that a collective about-turn from the government that decreases the trust between citizens and the state is the sole fault of Dlamini-Zuma. The whole Cabinet is to be blamed for arbitrariness and capriciousness.