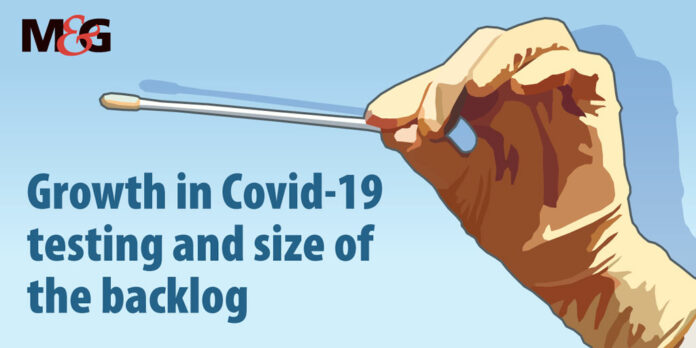 There are no backlogs. This was the story given by the National Health Laboratory Services (NHLS) for weeks. Then, last week, the state’s laboratory finally revealed the numbers — there were more than 80 000 specimens still in the queue to be tested for Covid-19.

Currently, about 4% of people who have been tested have contracted the virus. Of the 761 534 tests that have been conducted so far, 35 812 were positive.

From the 83 767 test backlog, there could be about 3 200 people who are not yet aware if they have or have had the virus.

This backlog has a significant effect on determining how the virus spreads and in which areas community transmission is highest. It also affects how the government focuses its scarce health resources.

But for months the NHLS said everything was under control.

In March, after the first case was detected in the country, the NHLS took over the testing from the National Institute for Communicable Diseases. That month, about 40 000 tests were conducted and about 1 300 people tested positive.

At the time there were allegations that there was a growing backlog of tests sitting at about  6 000. The head of the NHLS, Dr Kamy Chetty, said in a statement that the organisation had adequate testing capacity and equipment to meet the demand.

When pressed about the 6 000 test backlog, the laboratory’s spokesperson, Mzi Gcukumana, said: “The National Laboratory Health Service does not have any backlogs.”

By mid-April, the allegations still hovered, with numerous accounts from doctors in the public and private sector being published. Healthcare workers were complaining about how they had to wait for days to get test results back, putting the lives of many in danger.

In April the Mail & Guardian again asked the NHLS why there was a pile-up.

In an interview with the M&G, Chetty reiterated that there was no problem: “Every week we are doubling the number of tests that we are doing. We are ready, we have the capacity, the tests. We have no backlog.”

At the time she and other NHLS officials boasted about how capacity had been increased and said that by the end of April, they would be able to conduct more than 30 000 tests. Neither that, nor clearing up the backlogs, has yet materialised.

In May, when follow-up questions were sent to the NHLS about the backlog, M&G received no response.

Last week the NHLS finally confirmed that there was a backlog and it was more than the 6000 claimed by private laboratories or the 10 000 claimed by the Western Cape officials.

According to the NHLS, the backlogs only started to pile up in the first week of May when all of a sudden 49 550 tests could not be processed.

Essentially, the NHLS said that over one week there was a backlog of close to 50 000 tests because of demand exceeding supply. When it admitted a delay, it said in a presentation: “This was due to a global shortage of extraction and high throughput kits, logistical issues such as interruptions with production, flights cancellations, customs delays, closure of services during public holidays.”

This week the laboratory services was again asked about the issue, but would not respond to why they denied the claims for weeks on end.

According to Gcukumana they have placed orders with the suppliers to meet the testing capacity of 36 000 tests per day, however the laboratory is only receiving limited quantities when the suppliers have them available.

“The NHLS continues to engage with international suppliers to expedite the delivery of the test kits. The NHLS is, on average, conducting 60 000 tests per week with the kits it has available,” he said.

He added: “With the unprecedented global demand for test kits, which far outstrips the supply, the NHLS has had to perform tests with the sporadic supply of some of the key products from international suppliers. This has had an impact on the number of unprocessed specimens.”

The Western Cape has the highest backlog and, according to the NHLS, the minister of health has requested for the province to be prioritised. Thousands of kits will be arriving in the province in the next week.

There is still no time frame, however, as to when the bottleneck will be cleared and the NHLS will reach the goal of more than 30 000 tests a day.